Update: Saturday, February 26, 2011
Lida Sofianou and another protester who faced felony charges under the enactment of hoodlum-law [koukoulonomos], were released under bail conditions (sign on at a police station once a month). A third protester facing misdemeanors was released without bail. Until 1:07pm (GMT+2) the protester accused of carrying a bow and ax, was waiting to appear before the prosecutor (photos of the frame-up of the police, here). He is injured by the police beatings in the chest, by thoracic rupture. He got notice to appear before the prosecutor on Monday, 28/2, but he is still detained because he refused to give fingerprints. Solidarity is our weapon
–

Tens of thousands of people took to the streets of Athens on the day of the general strike on February 23 and headed to Parliament, flouting police repression and control. In a society crushed daily in the cog-wheels of increasingly intensified repression enforced by the state and the bosses, and under the pretext of the memorandum of co-operation with the IMF, the EU and the ECB, the determination of the thousands to march to Parliament signals a refusal to bow or to fall for the fright that authority wants to give. The demonstration blocks of the anarchists/anti-authoritarians, of the class base unions, of the neighbourhood assemblies, of social resistance against price increases etc. all carried a clear message: the message of collectivisation and self-organisation of social struggles from below, against mediation, party conduct and the class surrender of union bosses. The fighting spirit of the thousands who besieged Parliament and the insistence of those who stayed at Syntagma square for hours, facing the army of police, reveal the conviction that bosses are not unshakeable, that this is the time of social and class strike-back.

Almost from the beginning the demonstration came under police attack – the aim being for it to lose in numbers. During the arrival of many blocks at Syntagma square these attacks became fierce, with the murderous throwing of tear-gas, asphyxiating gas and stun grenades. The result was for demonstrators to be chased, tens to be injured, detained and arrested in a terrorising attempt aiming at the breaking up of the demo and that would in turn make sure there was no coherent, mass presence of people in front of Parliament. One of the blocks that were attacked and dispersed as soon as they arrived at Syntagma was the block of the Assembly of Resistance and Solidarity of the Kipseli/Patision area. A large part of the demonstrators were violently pushed toward Ermou Street, while some others were encircled by DIAS and DELTA forces and were beaten at Nikis Street by the entrance of the Technical Chamber. 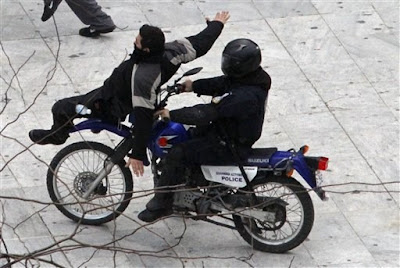 This is where comrade Lida Sofianou, who participated in the demonstration with the block of the Assembly of Kipseli/ Patision, was arrested. Policemen of the DELTA force threw her to the street, dragged her toward the finance ministry, and tried to set up a fabrication against her, in order to frame her up her with crushing charges. More specifically they grabbed her bag, which contained texts of the Assembly, and attempted to place within it another bag with molotovs which they themselves were holding. The comrade reacted instantly, denouncing to the demonstrators and passers-by present the taking away of her bag and the police attempt to incriminate her. For this reason policemen of the DELTA force started beating and threatening her in order to silence her. This attempt by the police continued inside the arcade of the ministry, where she was isolated. Despite the blows she was receiving the comrade continued to denounce the fabrication that was being set up against her to employees who were present there – and so she managed to avoid the fabrication with the molotovs. At the police HQ, where she was transferred after a while, a new imaginative police scenario was born, in order to justify her arrest and prosecution: there, they presented her for the first time with a stick and announced to her that she would be charged with holding and attacking a DELTA force policeman with it. In addition she was charged under the “anti-hoodlum” law in order for the charges against her to be upgraded to felonies. 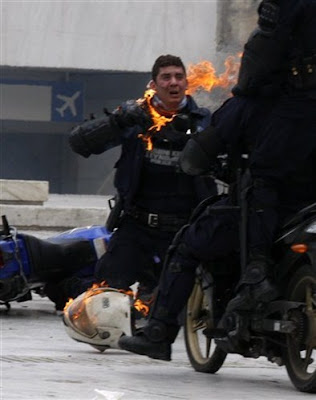 Lida Sofianou and seven more arrestees of the February 23 mobilisations were taken before an attorney general and a prosecutor on Thursday 24/2, while the ninth arrested person remained in hospital, injured by the police. Facing the charges of “disrupting public peace”, “attempted bodily harm”, “weapon possession” and the felony of the “anti-hoodlum law”, Lida was given notice to appear before an interrogator at the Euelpidon Courthouse on Saturday 26/2 at 9am, along with another two arrestees of the demonstration facing similar charges. The arrestees facing misdemeanours, some of them juveniles, were given notice for Friday 25/2. Until then they all remain detained at the Police HQ.

Our comrade, who participated in the strike demonstration of February 23 holding the banner of the Kipseli Assembly with the slogan “COMMON STRUGGLES OF LOCAL AND MIGRANT WORKERS, AGAINST EXPLOITATION, FEAR AND RACISM” is not alone against state repression! Through her 15 year-long activity in the anarchist social struggle, with participation in student and worker mobilisations, anarchist movement procedures, initiatives for the defence of nature and public spaces, neighbourhood assemblies, libertarian artistic activities and anti-authoritarian publications, she has contributed to the wealth of self-organised social resistance with her camaraderie, her passion and her creativity. In this travel within the collective struggle for a world of equality, solidarity and freedom she has met with thousands of people in struggle and has so previously found herself in the muzzle sight of the state, prosecuted for her actions.

We shall not remain silent when faced with the repressive manipulation against her, with fabricated police testimonies and supposed evidence that suddenly appeared at the Police HQ!

With the savage repression of the general strike demonstration, the arrests and fabricated charges against people in struggle the state attempts to terrorise all those who resist in the streets and to infuse fear in society. This terrorisation shall not pass!

IMMEDIATE RELEASE OF THE 9 ARRESTEES OF THE STRIKE DEMONSTRATION OF FEBRUARY 23!

NO PROSECUTION OF THE DEMONSTRATORS!

SOLIDARITY IS OUR WEAPON!

EVERYONE TO THE EUELPIDON COURTHOUSE, SATURDAY 26.2 AT 9 A.M.