Around 200 comrades came together to march in the street to the center of Santiago for the release of and in solidarity with all comrades in prison. The comrades kidnapped on August 14th continue the 4th day of the hunger strike, with the clear intention to gain their freedom and end the political-judicial montage they continue to be subjected to, under which those who express solidarity for them are persecuted, watched, and taken hostage.

It has been said many times before, ideas and liberating practices are being persecuted here. Outside market value, solidarity is dissidence, which once implemented, is criminalized and demonized at any cost to the repressive apparatus of power, including the press.

Yesterday (2/25/11), during the march in solidarity with the prisoners, an obvious harassment attempt made by the police and undercover agents was exposed. They did not succeed in disguising themselves with the landscape nor amongst our comrades. They were there before, during, and after with their disgusting cameras and notebooks filled with writing. We saw ridiculous characters changing their clothing during the march, taking pictures, fleeing, filming from rooftops, and following us after the march had ended. If they know the ideas we harbor, it is not because of a good intelligence work, but because we have never been hidden nor silent, to the contrary we wish to propagate, to share, and to live here and now.

If we remember the trial of formalization that took our comrades to preventative prison, it is easy to see that the proof that is continued to be presented against them, is not different at all from the proof that they could videotape or write yesterday during the march, in which a group of people who had never met, with common ideas, joined in order to manifest and publicly practice these ideas. Our comrades have been kidnapped from squats and popular libraries, or independent media and neighborhood tv channels, every practice of liberty is rooted in multiple faces (many which are public) of dissidence against power-capital.

Democracy invites us to the point of the bullet, imprisonment, and terror to pay passage, to accept a terrible job and keep us sitting in our houses watching tv. Against this we counterpoise our own celebration, not always so happy, but never as bitter as the lethargy of submission. Comrades: if we fight we could lose, but if we don’t fight we are lost…

Communique: On the 14th of August 2010, the Public Minister, working in cahoots with the district attorney’s office of Metropolitana sur, dictated a series of arrest warrants and raids, focusing police terror on private homes and social centers. The immediate effect being the arrest of 14 people in a repressive strike which came to be known as the “caso bombas” (bomb case). The arrested are accused of pertaining to an apparent illicit terrorist organization created in the irrational minds of some “legal rights specialists” and today they continue to have us behind bars. The investigation into the “caso bombas” began approximately 5 years ago. Under the Bachelet administration the state appointed 3 district attorneys to exclusively investigate and discover the authors of each and every one of the bombs that had been placed in financial, police, public service, or any other institutions. In the five years that followed they filled 43 folders with dates from police sources, criminal experts, protected testimonies, declarations, surveillance of suspects, their families and places, telephone taps, and raids on specific places and social libraries (all of which were subsequently raided on the morning of the 14th).

With all this information none of the judges or district attorneys decided to incarcerate anyone. The evidence wasn’t conclusive enough, it was speculative and didn’t allow for the identification of anyone responsible for the placement of any of the bombs. On top of that, the district attorney Xavier Armendáriz declared, before the anxious Ministry of the Interior of the time that; “…it’s necessary for us to act cautiously in our investigations due to the weakness of our evidence….” especially when “…the authors of the bombings don’t belong to violent cells in and of themselves, rather they form part of loosely knit splinter groups without a leader….” (Emol 27 November 2009).

The apparent “following of the rules” in terms of the investigation came to an end on the 14th of June 2010 when, having removed Armendáriz through pressure by the Ministry of the Interior, Rodrigo Hinzpeter appoints Sabas Chahuán as head district attorney. That’s how the district attorney Alejandro Peña appears on the scene, described by the newspaper La Tercera as “…a walking paradox, the fusion of judicial and police bureaucracy with the fantasy of being able to juggle the two combined in one person.”. With this presentation the montage begins.

The district attorney develops a new strategy without keeping in mind the human costs that his actions will accrue. If the old district attorneys weren’t able to recognize or identify the culprits then he would invent them or, by any means necessary, make the pieces fit in his new “hard-line investigation”. Structuring the infamous illicit organization with leaders who haven’t spoken in years and grunts that don’t even know each other and- the funniest part of it all- European financiers!!!! As if 950 euros sent on just one occasion to one of the accused would fund such subversive actions (a safe house, cars, arms, false documentation). What a great imagination this guy has! They even invented a link between one of the ‘leaders’ and a Pakistani man that was arrested and then let free a couple of weeks later at the US Embassy for having TNT residue on his person. Finally, the fantasy helps to plan the “new strategy.” Especially in terms of the media campaign set about by means of official information and recompilation of data regarding those apparently suspected placing explosive devices.

Information such as frequented spaces, profiles of suspected leaders etc. The sights are set on people that can be linked to social spaces, community radios and stations, students professing libertarian ideals, ex-political prisoners, all recognized critics of the “neo-liberal” model, and people in solidarity with struggling peoples – especially the Mapuche in their desire to maintain their identity, worldview and territory. They aren’t persecuting actions but ideas, relationships, autonomous libraries, squats, and cultural, artistic and community spaces.

Once the theatrical stage is set with its protagonists and their corresponding physical and psychological characteristics and a perfectly constructed public opinion, a repressive strike is unfurled. At this point two months had past since Alejandro Peña had taken the reins as director of the political-judicial montage. With the same files, dialogs, places, actors and a remodeled incriminatory script the operative spectacle fills the airwaves the morning of the 14th of Aug 2010. After our arrests the district attorney asks for three days to inform us of the accusations, in theory this should have been done on the same day as our arrest. Later, he solicits 180 days (6 months) of preventative imprisonment until the end of the investigation.

These 180 days were up on the 14th of Feb. 2011. On the 14th of February we are notified that we will be cited on the 16 of March 2011. All of this makes the trial stranger, Alejandro Peña is capable of asking for 6 more months to put together his political puzzle. During these long months, we haven’t just been restricted to a 2×3 meter single cell 22 hours a day with 3 hour family visits once a week in tiny spaces without natural lighting, but we’ve had to endure torture by the state’s civil servants in first-person. An example of which occurred on the 8th of October 2010 when professionals of Legal Medical Services along with agents of LABOCAR, DIPOLCAR and the police violently extracted DNA samples from each of the accused. These samples were to be compared with the DNA samples found at the scenes of the bombings. This “scientific evidence” found no relation between our DNA and that found at the scene. On the other hand, we have seen how the evidence in the investigative files is only held up by police conjecture based on friendships, family alliances or coincidences in public marches or political-cultural activities.

On top of all that, it’s important to note that we all didn’t even know each other until the day of our arrests. For that fact alone, its impossible for us to have formed a “terrorist association” and even more impossible – any organization. No evidence or material for the fabrication of explosive devices was found in any of the raids. There isn’t even any fingerprint or video evidence against any of us. Before the depraved judicial sacrilege, secret files, telephone taps with our lawyers, the use of secret witnesses with psychiatric antecedents like Rodrigo Vera Morales and Gustavo Fuentes Aliaga and with everything stated above we have decided to start a liquid-hunger strike on the 21st of Feb. 2011 at 00:00 hours.

AN END TO THE POLICE-JUDICIAL MONTAGE

FREEDOM FOR ALL CHILEAN AND MAPUCHE POLITICAL PRISONERS! 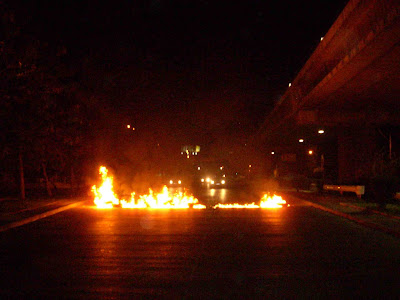 The full list of participants in the hunger strike is as follows: