Report from Day 1 of the Trial of Eat & Billy (Indonesia) 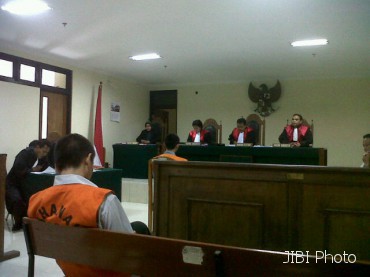 The lawyers for the social combatants: Andi Suryo Awalludin and Hillarius NG Merro chose not to submit an exception to the judges. In front of the Judge Leader, Mulyanto, three of the prosecutors: Wiwik Triatmini, Wahyu Handoko and Tri Widi read the indictment alternately. In this case, the two combatants (Eat & Billy) are charged with the same clauses but accused of having different roles.

After the trial, the prosecutor Wiwik Triatmini refused to give comment about the reason behind why they charged five different chapters just in one case. Triatmini pointed to Chief of Criminal Law Section as a person who can explain it. Triatmini also refused to give the details why they used Terrorism Act in this case, and denied behind the reason that he still not read the interrogation files.

After hearing the charges from the prosecutors, there’s no exception from the legal defenders. Andi Suryo Awalludin said that the charges do not contain
any absolute violation, about the location and facts.

Even so, Awalludin deeply regrets why the prosecutors used the Terrorism Act and other chapters in this case. He said that the action done by the two combatants aren’t terrorism because there no explosive elements in the action against ATM of BRI Bank. Awalludin said that the prosecutors imposed the use of the act. He also said that the Terrorism Act can’t be used in this case. The reason is the two combatants aren’t the members of a terrorist network in Indonesia [as the law describes the subject]. The action itself for Awalludin is categorized as a criminal action and has no relation with terrorism.

This trial itself lasted for 90 minutes and will be continued on Tuesday, 7 February 2012 with the agenda to listen to witness testimony.

This entry was posted on Friday, February 3rd, 2012 at 4:17 pm and is filed under Prison Struggle.