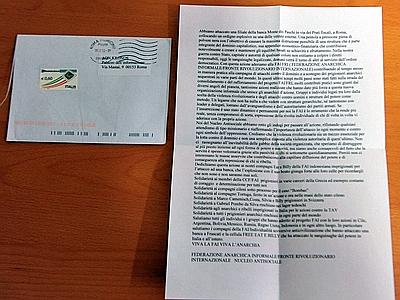 Rome, 9th March 2012 (Adnkronos) – On the day following the explosion of a device outside the branch of the Monte dei Paschi di Siena bank on Via Dei Prati Fiscali in Rome, a letter claiming the attack has been addressed to the AdnKronos group in piazza Mastai. The letter is signed by the Informal Anarchist Federation / International Revolutionary Front / Anti-Social Nucleus.

The letter has been delivered this morning and has been seized by DIGOS officers [political police division] immediately called on the premises. Surveys and investigations are being carried out by the police. The explosive attack, with which the Anti-Social Nucleus explain their affiliation to the FAI/FRI, is claimed as a new contribution to the struggle against the State, the banks and capitalism.

The Anti-Social Nucleus-FAI dedicate this action to Eat and Billy, Indonesian anarchists arrested following an attack on a bank and already mentioned in other claims accompanying similar attacks. Solidarity is also expressed to anarchists arrested all over the world, including those who ended up in jail for the actions against the TAV.