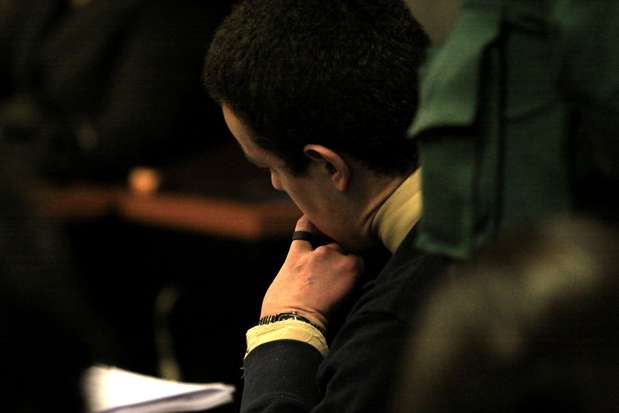 The trial started on Friday, July 20th, in the justice center. Below we reproduce the summary made by Viva la Anarquia.

We learned that our compa has been punished by the jailers and in isolation since Thursday the 19th. We learned this thanks to the fact that his lawyer was going to visit him and found him handcuffed to his bed, and demanded (during the hearing) explanations for the punishment. The judges in turn requested the prison guards to give the explanations in a maximum period of 24 hours.

We await more news about this.

Today, in the 4th Oral Court of the Santiago Prison, the first hearing of the oral trial against our compa Tortuga was held.

It started with a clear prohibition on the press present there: they could not spread images of Tortuga, in order to thus maintain the presumption of innocence.

Then, the opening arguments began: The accusatory party (Public Minister, Ministry of the Interior and Santander Bank) spoke about why they believe that Tortuga violated the Anti-terrorist Law. According to them, Tortuga’s action was of a terrorist character.

Later, Tortuga’s defense spoke. His lawyer spoke about why Luciano’s action did not have a terrorist character, arguing that a bomb that does not hurt anybody (aside from Tortuga) is not capable of destabilizing democracy and about how none of the clients or workers of the bank felt fear due to the attack of that June 1st. Tortuga’s lawyer said that he will seek the absolution of the charges, expecting that the accusatory parties decide to refile them.

When the tribunal asked Luciano if he wanted to speak, our compa refused.

Finally, a witness testified. This was a functionary who was in charge of the raid and interrogation of Luciano’s daughter’s mother (raids and interrogations that were made voluntarily). The officer related his work during those days: when he went to the place of the bombing, when he observed how a group of solidarians hung a banner when Tortuga was hospitalized, and when he reviewed the hard drive of a computer that Tortuga frequently used.

Later, the police proceeded to show some documents found on that hard drive. Some of the documents were Terror in the City #1 and #2, Burn Your Car, etc.

Just when the hearing was about to end, some solidarians who were present managed to send some letters to Tortuga, which the compa was able to receive thanks to the decision of the tribunal that the guards not read them, to thus maintain the right to privacy. The hearing ended at 1:10 PM.

The trial is expected to last 3 weeks. The hearings are Monday through Friday from 9:00 AM to 4:00 PM in room 901 (9th floor) of Building D of the “Justice Center” (Rondizonni Metro stop). Anyone can enter as public carrying only their identity card. The entrance of blunt objects, blades, lighters and matches are prohibited.

THE RALLY AND BOMB THREAT At 12 PM a rally began in solidarity with the compa. Around 50 people came and concentrated with banners that had slogans in support of Tortuga. They threw leaflets and stuck three posters on walls of the (in)Justice Center. There was also a group of police in the place hoping to intimidate the solidarians, at one point even using blows to force a group to stand up.

Also while the rally was going on there was a bomb threat in Building A, for which it had to be evacuated, without affecting the goings-on of the hearing against Tortuga. The following information is a contribution from Contrainformate about rallies in Concepción and Valparaiso in memory of Carlo Giuiliani, Luciano Pitronello, and Mario “Tripas.”

Today could not be a normal day, as it turns eleven years since the death of Carlo Giuliani in Geneva at the hands of the fascist Italian police during the anti-G8 riots and moreover the trial is being carried out in the centers of injustice against the comrade Luciano Pitronello.

Different rallies were carried out in the cities of Concepción, Valparaíso and Santiago with the aim of spreading information about the situation that afflicts Tortuga.

In Valparaíso a post was set up on Plaza Victoria with banners and information; for about one hour leaflets were passed out and conversations were had with the various people who passed through. There quickly began to be felt a tense atmosphere due to the strong presence of police officers around the plaza, from plainclothes cops, a patrol and an idiot, to a couple of special forces recording us from a distance.

After this it was only a question of time before the repressive forces made an action that only sought to end the activity. An FFEE microbus arrived and about twenty agents got off, making no delay in surrounding us and starting to demand our ID cards and search our backpacks. An excessive action considering that we were a group doing nothing more than passing out leaflets and transmitting information about our brothers and sisters. The activity was continued at all times and the passersby also rebuked the police for the clear attempt at censure.

Frustrated at not being able to get an aggressive responsive from us, since we all understood that they only sought for us to give them an excuse to arrest us, a squad got on the microbus and left (only to park no more than a block away), not without later harassing a seller who was on our side and a group of skaters who were also in the area.

The rest of the cops remained a few meters away until the end of the activity.

[Further reports of the rally in Concepción omitted by translator. At this event, the solidarians were also approached and questioned by the political police.] END OF THE PUNISHMENT

During the hearing today, Monday, the judges decided to revoke the punishment that the jailers imposed on our compa. The reasons for the punishment were that Luciano was to be transferred to another habitation, but that habitation had a system of showers that our compa could not operate. Therefore, Tortuga refused the transfer and was beaten and punished for a month.

However, the judges decided that the punishment was not apt in the sense that it affected a “due process,” distracting him mentally from the trial.

The trial began with the questioning of the same witness (the police officer) who testified last Monday, but this time he was questioned by Luciano’s defense. Among the most redeemable aspects of the questioning was that it was made clear that Tortuga’s attack did not supernaturally affect the tranquility of the area. Because of the bombing traffic had to be blocked on the surrounding streets, but this also happens when there are car accidents. Another fallacy in the accusation was that the police showed as evidence a series of vegan pamphlets; the defense managed to clarify that veganism and anarchism are two different things, moreover that veganism has no relation with acts of violence. Something noteworthy happened with the photographs in which Luciano is going out with some friends. The police insistently said that these friends had prior history for public disorder, but the lawyer managed to clarify that these photos were only of a social nature.

Later a worker of a local fast food place testified, who heard the attack from a block away. The accusatory party tried by all means to make note that the witness felt fear due to the bomb, but that was shown to be a lie since they kept working in the place for eight more months, until changing employment for other reasons.

Then came a more important witness. It was the taxi driver who aided Luciano when he was burned by the explosion. In this case, in spite of the defense’s intentions, it was observed that the taxi driver was left with psychological scars since after having helped Tortuga recover, he left the place driving but in a state of shock. According to him, he had nightmares for five months in which dreamed of the wounded body of our compañero. He also stated that his automobile ended up with minor damages (just some minor scratches) since he was very close to the place of the explosion. In the end, he related how many people passed by the place and none helped him.

When he finished testifying, Luciano decided to speak briefly in order to say something to the taxi driver: “Hello Mr. Rodrigo… So, I am not very good at expressing how I feel, but I want to express my gratitude to you for your action, for what you did… in truth I want to thank you for having helped me.” The taxi driver responded: “Yes, well… I, again, I don’t know why I did it, maybe it was a matter of instinct. In that moment you were very shocking, but now it makes me happy to see you like this, smiling as you are.” Then he asked the judges, “I know that I am a simple person, but I would like to know if I may go embrace him…” Permission was given to him and at that time they both went to the center of the room to embrace very emotionally, as well as exchange thanks and good wishes. The taxi driver left the room waving to Luciano.

Many people shed some tears, including our cub Tortuga. Therefore the judges gave a recess of 5 minutes in order to, as they said, “Calm the emotions.”

The hearing continuing, a security guard from a nearby place who witnessed the attack was questioned. Luciano’s defense managed to show that the witness fell into contradictions, stating one thing in the trial and another in the statement he gave to the police. In relation to June 1, 2011 he stated to the police that he saw someone flee and then felt the explosion. Today in the trail he stated totally the contrary. Moreover, in the statement that the police have he said that the signature that appeared in his name was not his own.

Finally there was a recess of an hour to eat and then they continued with the second to last witness. It was an agent of the Police Intelligence Directorate of Carabineros (DIPOLCAR). After a couple of questions, contradictions were again made clear. First he said that Luciano was on a list of names [Sp] of people linked to a terrorist network that shortly after was shown to be a lie [Sp] by the same justice. Then they asked him how Luciano had appeared on this list; the officer refused to respond, invoking a right to “police intelligence.” However, the tribunal ordered him to respond, after which he said that in reality that information was taken from an internet page. Moreover certain irregularities were also brought to light, since the officer supervised the guard’s statement.

To end, a friend of Tortuga took the stand who was arrested the day after the accident while transferring to his house personal objects that Luciano had in a squatted space. The prosecutory party of the case tried on repeated occasions to get information from the compa, asking him if in the house they printed “things,” what activities happened in the squat and what they dealt with. The final question was in relation with why he brought Tortuga’s belongings to his house and not to the police, but the judges ordered him to not respond due to considering the question incriminatory.

The compa left making gestures of embrace to Tortuga, who responded with a smile on his face.

Due to how quickly the witnesses are being questioned, it is expected that they will be finished this week, to next week go on to the presentation of evidence.