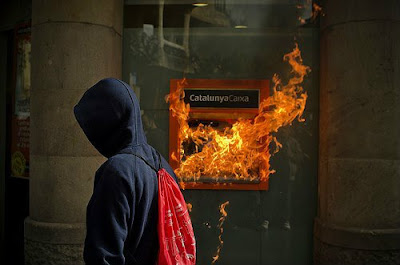 There will be a general strike in the southern countries of Europe. The uncontrollables want to make it spread and go global. Fire and barricades in the streets and the police and bosses put on the run. Here is the call.

325 receives and transmits via tarcoteca:

In the current context it is meaningless to stop working for only a single day. State and companies are capable to absorb its effects and make it harmful to workers that support the strike. The only solution in sight is a permanent and active general strike. But in this globalized world the response must be global. Single acts in a country don’t have effects in the market economy. Similar situations in hundreds of countries allow the coordination. As simple as establishing a common date, 14-N.

Translation from an article of La rebelion de las palabras: About the 14-N next General Strike

We have no magic bullet (or want one). What we know is that something has gone wrong here. When you wake up every morning before sunrise to let life go on a low-paying gigs, bound to rush, schedule and boredom. When you see on TV professionals of lying talk about violence but shut out its origin, because they give more importance to a few broken windows of establishments owned by multinational killers, that the life of hard workers who falls from scaffolds because the employer has decided to speculate with the money that could have been serve to implement safety measures in the work. When you go to the supermarket and remember that prices have gone up in VAT again. When TV advertising gives you empty desires and whispers in your ear that you are nothing by not having the latest model of mobile phone, or larger TV with 3-D ultra-realistic surround sound system. When politicians do not accomplish their campaign promises and you, quietly, saying also “bastards, you should explode”. When you are so sick as we are. Sick to swallow, to silence, to continue to forward as if nothing is happening.

We are not the anti-system that everyone speaks of but very few knows. We are your sons, your brothers, your classmate or work partner, your neighbor. We are as fucked as you are, and understand everything you feel, because we also suffer it, but we are disenchanted with the false promises of capitalism, because one thing is clear: ed-trio.com/buy-levitra-online With this system there is no possible dawn. The class counterattack requires generalization and to change once and for all the fear into anger, desires into actions and words into facts.

– Because one-day strikes and demonstrations of moving flags will not change anything (and it is time to understand).

– Because, whatever its conditions, wage labor disgusts us by its nature and definition.

– Because domesticated labor unions are not the solution but part of the problem, and do not represent us.

– Because banking strangles us with the complicity of political parties who claim to speak in our name and on are only dedicated to deal with our future impoverishing our lives.

– Because we do not care if police are also upset. They are not on our side and will never be. They are the enemy of working class to beat, and who work to keep the panopticon that locks and choking us, and of course, do not deserve to give them flowers.

– Because this is not only going to change by itself. Social-democratic illusions do not convince us.

– Because we do not need anyone to tell us what we must do. We will build by ourselves the alternatives that we need and want, not the imposed. Assemblies, horizontality and direct action against delegationism, bureaucracy and hierarchy.

On November 14, all the comrades meet in the street, to remind to those who are really guilty of this crisis (bankers-politicians, not immigrants or unemployed crowds) who holds to whom. Let barricades and fires sabotage bourgeois illusions of reformism and collaborationist syndicalism and let flames light up the feeling of revolt we all carry in our hearts for our dreams to travel to the existing fires in Greece, Chile, Portugal or Italy, whose smoke signals communicate our desires and can become the third (and final) assault of proletarians to class society.

We have lost patience, time, and future. Only fear last.
Do by yourself and organize as you see fit.

While misery remains there will be rebellion.