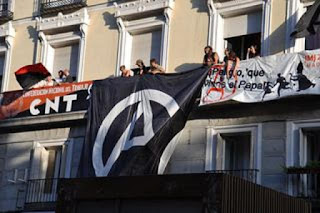 Courage comrade. This fact is a sign that our movement bothers Power. It is not the first time that such kind of incidents happen. Hope Joaquin is out soon and in good conditions.

The police kidnaps our comrade Joaquin at Union local door
This afternoon several Secret Polices with nothing better to do have been harassing for no reason several colleagues asking for documentation, as they refused to be identified. For a long time the pigs have shown the swagger that comes from carrying a weapon (it is his only strength), wanting to detain the comrade without evidence, they are working for the armed force of the state. The harassment continued to the door of the Union, in 5 Tirso de Molina, Madrid. The secret agents had requested reinforcements, presenting a lot of individuals armed with batons and guns, uniformed. They have focused their objective in hunting our companion Joaquín, preventing comrades both entering and exiting the building of the Union.
Many neighbors and companions have approached the violent behavior and attitude, but these have increased the violence, with the pigs assaulting several people, kicking and grabbing Joaquin. The comrades have tried to prevent the arrest but police violence has made it impossible. Joaquin has been kidnapped at the door of the CNT local and locked in prison in Leganitos police station, well known for allegations of torture practices to detainees.
So far we do not know the status of our compa because Leganitos Police Station refused to provide any information, not even to his family, and also refused to give him counsel data to have a defense. We have no data or knowledge of what they are doing with him, or if he has any formal accusation.

The CNT condemns all kind of State violence. The kidnapping of defenseless people is the most disgusting we suffered in the hands of these people and demonstrates the cowardice of a system that can be only legitimized by violence.