Communique by the CCF-FAI about Marian Kola (Greece)

And, after all, how is freedom truly gained? The only sure thing is, that he lies outside the cells of Democracy, outside the storage of human souls, outside the land of “correction”, obedience, apathy and psychiatric drugs.

Everyday is a repeating reality. Every morning, noon, evening you hear the sound of the keychain. Body counting. They have to be sure that you are still locked up, inside four walls. And only a stroll in the prison yard, while looking at the blue sky, makes you yearn for the outside… and tomorrow again from the start… In an everyday routine, where time seems to be frozen…

In this environment, if you are lucky, you are also going to meet people, whose mind isn’t imprisoned by the concrete. They are constantly thinking of how they are going to tear down the walls, of how they will escape… There, in the hellhole of Trikala***, we met Marian.

We don’t want to praise anyone. We know, one way or another, that Marian was neither an anarchist, nor a comrade of ours. But we also know that he had a free soul and that his eyes looked at the horizon, constantly seeking of an opportunity to break free from prison’s time and space.

That is what we wanted to talk about. For the few words that we had with him. For how much he wanted and demanded his freedom without terms. For the way he passionately made his dream come true. For freedom, which he bled and died for. For a path, that very few choose to follow to the end. For all of those things, that we appreciated about him, when we met him.

A goodbye for you, our friend. A goodbye to all those, who “left” while trying to escape from the cells of Democracy.

Some imprisoned members of CCF, who found themselves together with Marian in Trikala prison

P.S. For the deathly ambushes and the modern head-hunting cowards, we have no words. It is our pleasure to see you mourn over your dead colleagues’ coffins.

Notes:
1. Marian Kola was an imprisoned member of a gang of armed robbers. He, along with six more convicts, escaped Trikala prison, some months ago and they were on the run since then. The whole police force of Greece with the help of the Greek army had made various attempts to capture them. One civilian and a cop (the cop was supposedly killed by Kola himself) have died in different occasions where the fugitives and cops shot at each other. During this chase, the mass media was presenting the gang as “public enemy number one”, preparing the murder of the fugitives.

It is worth noting, that the Albanian nationality of the group, has played a crucial role in demonizing them, as the Albanian minority has been the main target of Greek racism throughout the 80’s and 90’s. Last week, the group was located in a mountain in Northern Greece. Their hideout was stormed by the cops and Kola was executed. Two fugitives are still on the run, while the rest of them are either arrested or dead.

2. MIRUPAFSIM means “Until we meet again”, in Albanian.

3. Reference to the prison facility, located in Trikala town. 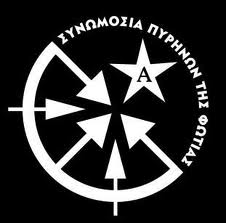