Anti-fascists on the day had no illusions that march at the sea would be impregnable and chose to roam the city centre of Brighton in affinity groups seeking the fascists who would be walking down from the railway station, with some drinking in pubs away from the march looking for a fight with those they are against such as anyone who is not white or skin headed, such as the racist attacks that happened last year after the march.

It did not take long for the fascists to be found as a group of EDL were found in the pub The Bright Helm on West Street a short distance from the starting point of the march. About 100 Antifa were quick to arrive on the scene, scuffles ensued but the police where quick in kettling the pub and preventing the Antifa from getting near them with mounted police wading there way into the Antifa to move them up the street away from the EDL.

As groups of Antifa continued to roam the streets, a group came face to face with fascists down Queens street coming from the station with flags. After a brief shouting match of words the Antifa set upon the group leading to one fascist running away with a bloodied head and the rest being protected by riot cops who had come to save them as usual.

Later in the afternoon a sustained conflict broke out between Antifa & fascists from the Casuals United (a well known fascist football hooligan group) outside the Dorset pub on North Road. The two cops in the street tried to calm the situation but the Antifa were having none of it as fist fights broke out and surrounding objects where thrown in the fascists direction. Again the riot police came to rescue of the fash chasing the Antifa rather than the racist scum.

Street fight outside the Dorset:

With the march coming to an end on the sea front the main conflict of the day began with anti-fascists trying to get at the EDL as they were being escorted up Queen street back to the station. Many a skirmish broke out between the police and anti-fascists as they linked arms to block the route of the march. Horses were once again used to charged into protesters evoking images of anti-fascist actions, the poll tax riots and student protests of past. One female Antifa sustained a serious injury to her ankle as a horse was charged upon her. This incensed the anti-fascist crowd as projectiles started to fly including bottles taken from recyle bins and rocks from a near by road works. Barricades were quickly built from metal fencing from the road works and benches from a local pub as more projectiles wee thrown and a chant of ‘No Pasaran!’ sounded in the street outside the station. One bottle was seen hitting the FIT police unit (Forward Intelligence Team) filming the conflict, beating a hasty retreat from the barricades.
In amongst the chaos that ensued a pair of female Police Liason officers (cops who try to peacefully negotiate with protesters to calm them down) where caught trying to attempt to arrest Antifa building a barricade. Upon seeing this the crowd set upon the two Liason’s beating them to the floor until they were rescued by riot police who intervened. That will make them think twice before they next ask people to remove their masks!

It was clear that no one was going to get anywhere near the fascists as they were coming up the road so small groups broke away from the main crowd and tried to find other ways to get at them but also to go back to the city centre to search for any fascists left behind. In one instance a police CCTV van took the wrong turning and was confronted by an Antifa black bloc coming from the police station, the crowd chased the van down the street with rocks conveniently found in a nearby garden.

When groups did arrive in the city centre it was clear the cops had enough constantly harassing, chasing and trying to snatch any groups of Antifa they saw in the street. In one incident TSG swooped on a group of Antifa in Victoria gardens driving their van at full speed off the road and swerving to try to hit anyone in sight. Fortunately no one was injured or arrested in the incident.
With the day coming to an end, in the evening small groups of anti-fascists hung around in the area just in case the fascists had done the same.

The EDL where shown again yesterday that if they keep coming to Brighton or any street in the UK that they will be met with violence that they deserve. Their dwindling numbers on protests and also since last years March for England (they were only 100 this year) is a testament to the rising confrontational anti-fascist presence, not that numbers are what matters, even one fascist on a street is unthinkable.

The only way to stop fascists is to beat them of the streets!

From a non-affiliated anti-fascist

Barriers blocking the route to the march

EDL outside the Bright Helm 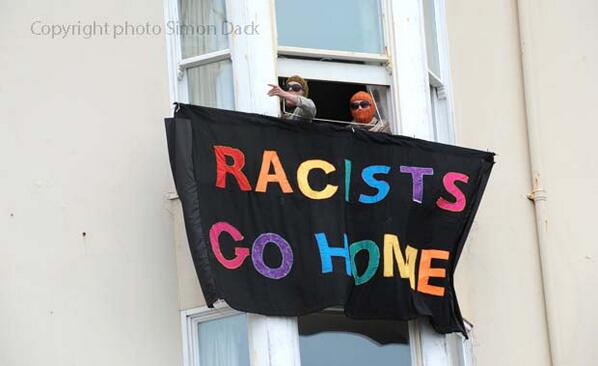 “THIS IS ANTI FASCISM”