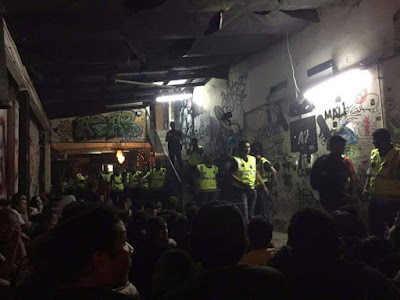 The state use Rumah Api as the scapegoat of recent event of attack on banks and multinational corporations in KL for the past 2 years. So far, they found nothing to link us with that events. The police seize all the musical equipment at the concert hall, seize 2 computers of people who live there, one smart phone, artwork, and books belonging to people who live there. The police said they search the building for any weapons or explosives that can link us to terrorism.

All 160 people who got arrested were remanded for 3 days. Among the arrestees, there are comrades from United States, Germany, Spain, Phillipines and Indonesia who attended the concert. According to the detainees, during the interrogation, the police ask about their participation with Rumah Api and what knowledge they had about Rumah Api and terrorism. They were given very little food or water and there are issues of mistreating the detainees, especially womyn detainees.

The police released all of the detainees on 31st August except two comrades, one from Manila and one from Bandung. The police mention that they still under detention due to the process of checking their status in Malaysia and because both comrades have records for entering rtetracyclineuse.com this country without legal permit. [The two comrades have now been released – 3/9/15].

At the moment, they still held the computers and a smartphone until further notice to help their investigation. 2 comrades are now facing court charges of Section 143 of the Penal Code, Section (4)(1)(b) of the Sedition Act and Section 6 of the Selangor Entertainment and Places of Entertainment Enactment and are facing fines and prison sentence of 20 years.

We are asking for solidarity from all over the world to spread the news. This is a brutal tactic used by the state to clamp down on the movement. With current political and economic instability in this country, and also the uprising of the anti-government sentiments, they are trying to put down any action or any lifestyle that doesn’t go along with what they want.

On the Rumah Api side, the gig that night titled is Party Tonight, Revolution Tomorrow is nothing more than just a normal friday night gig with no intention to relate it with Bersih 4 rally. We at Rumah Api are critical with the popular struggle in Malaysia. Bersih 4 which is a demonstration for free and clean election is a so-called first world problem and it has a middle upper class agenda. Bersih 4 is being supported and joined by liberals and Islamists with their partisan politics that we are all against. We focus more on the grassroots level and are more interested to put our energy into strengthening our own and surrounding community. We see, by supporting Bersih 4 and it’s agenda, that we would be on the wrong side of our struggle. In Malaysia, by changing the government, it will not make the problems goes away. Issues of xenophobia, homophobia, racism and religion are still the serious problems the politicians failed to address.

Now, people still gathering outside of Ampang Police Station to pressure them to release two of our comrades. 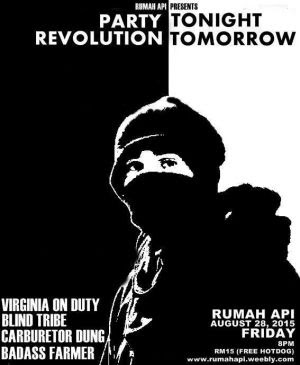 This entry was posted on Wednesday, September 2nd, 2015 at 8:17 pm and is filed under Social Control.