Athens: Action outside the embassy of Spain in solidarity with Mónica and Francisco (Greece)

On Tuesday evening, March 8th 2016, we went with banners, flyers and sprays outside the Spanish Embassy in Athens (on Dionysiou Areopagitou Street, in the Makrygianni district) in a minimum display of solidarity with captive comrades Mónica Caballero and Francisco Solar, who stand trial in Madrid.

The banners read: “All laws are terrorism – Freedom for Mónica and Francisco”; and: “A life of combat – Prisoners to the streets – Freedom for our bodies – Madrid, 8-9-10/3/16”. Walls of the embassy building were tagged with: MONICA Y FRANCISCO LIBRES (“Mónica and Francisco free”). Among the slogans shouted (mostly in Spanish) were the words “Mateo Morral: Presente” – as well as “Javier Recabarren: Presente” in view of the week of actions in Chile in memory of the 11-year-old comrade. 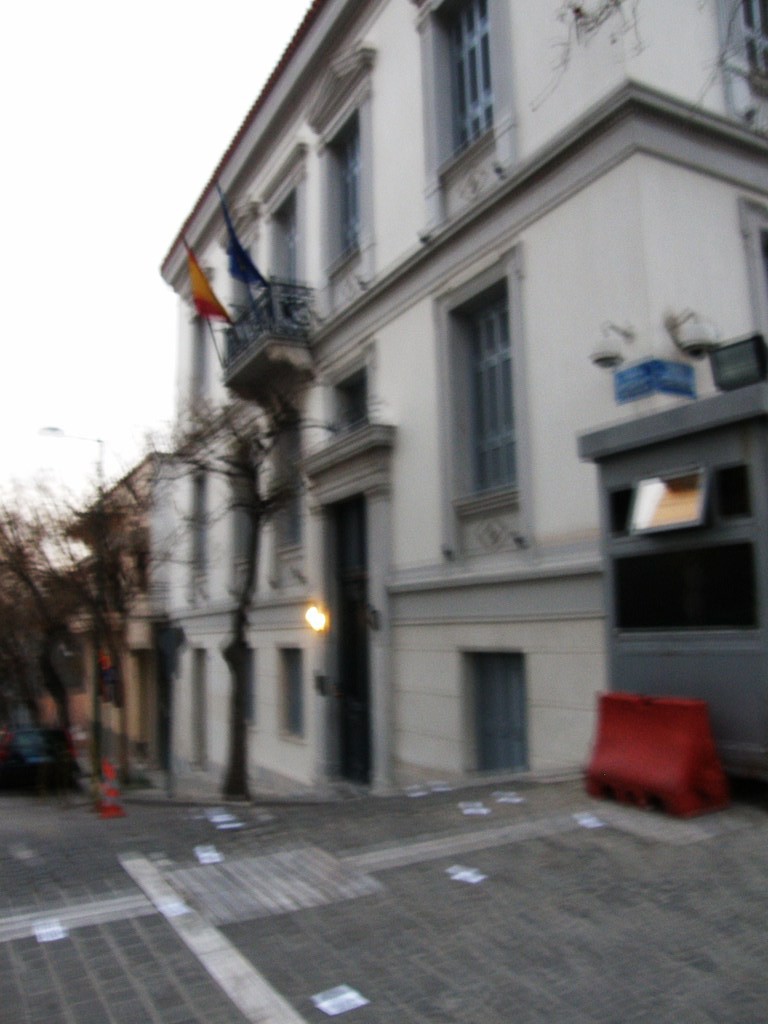 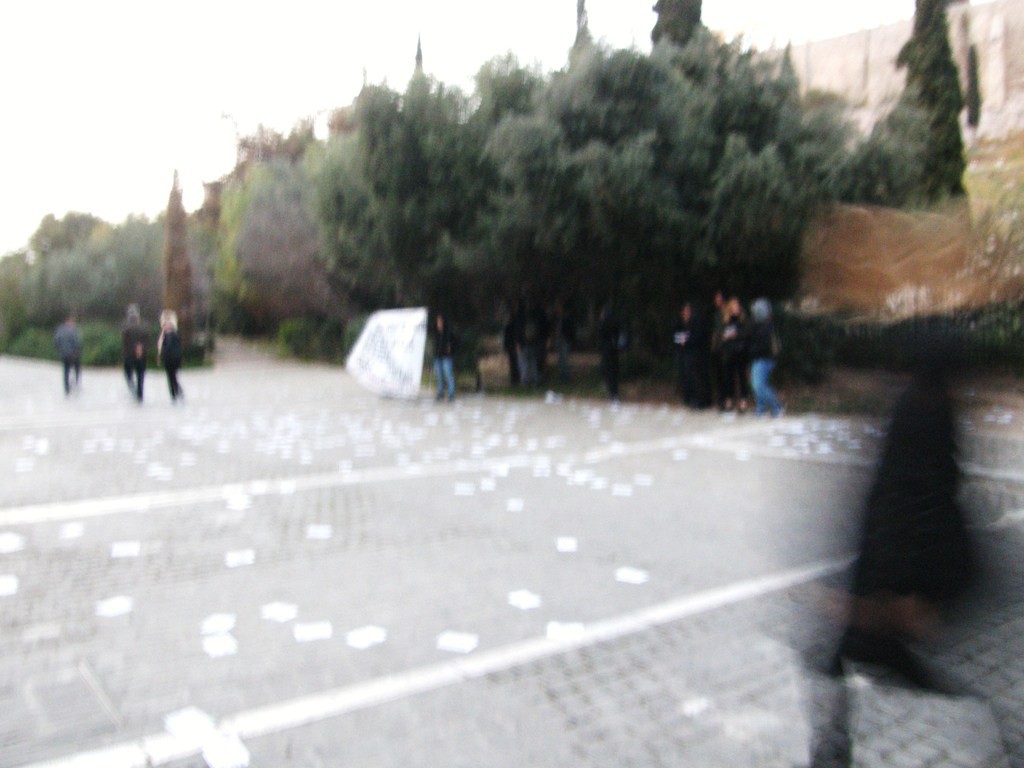 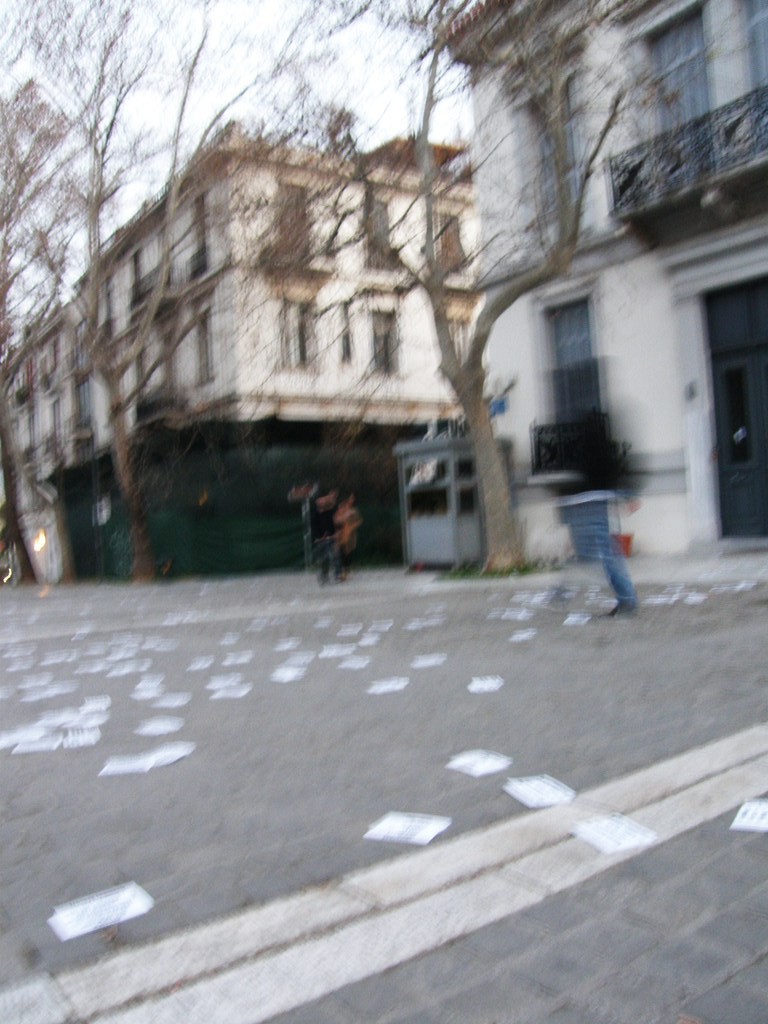 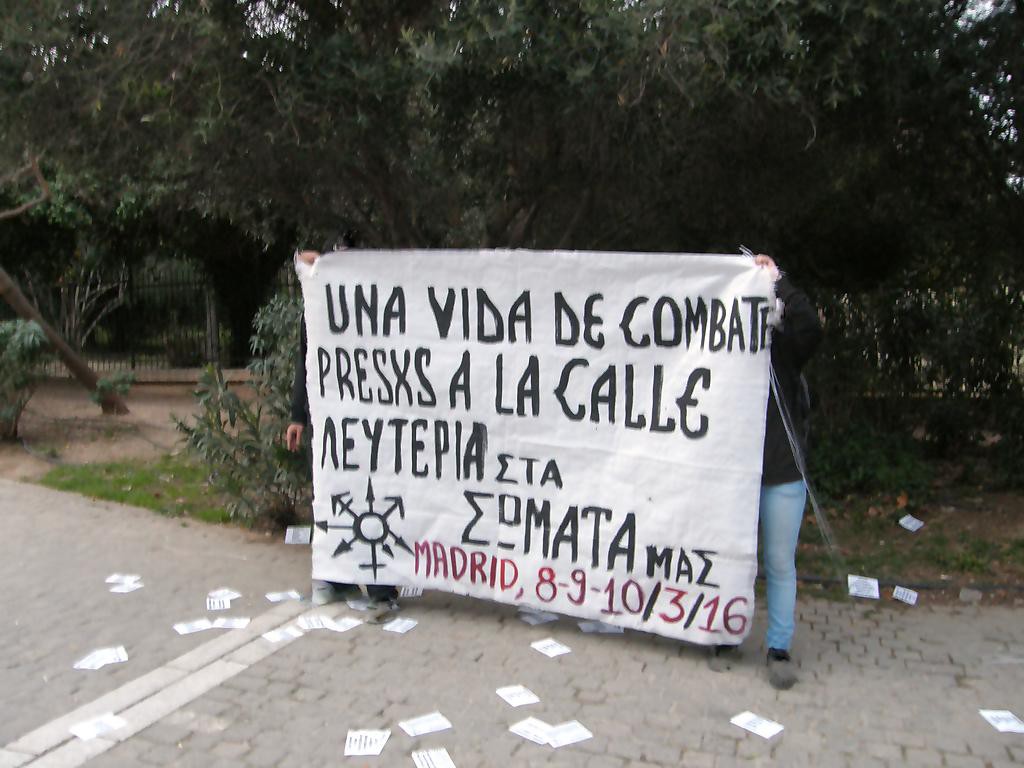 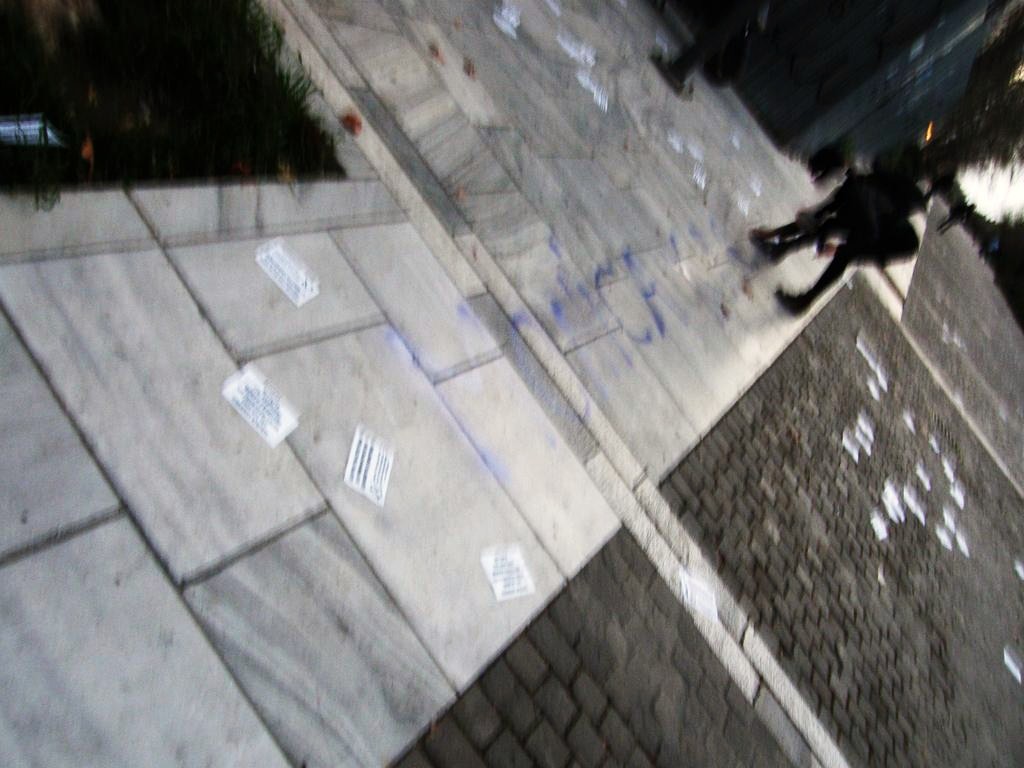 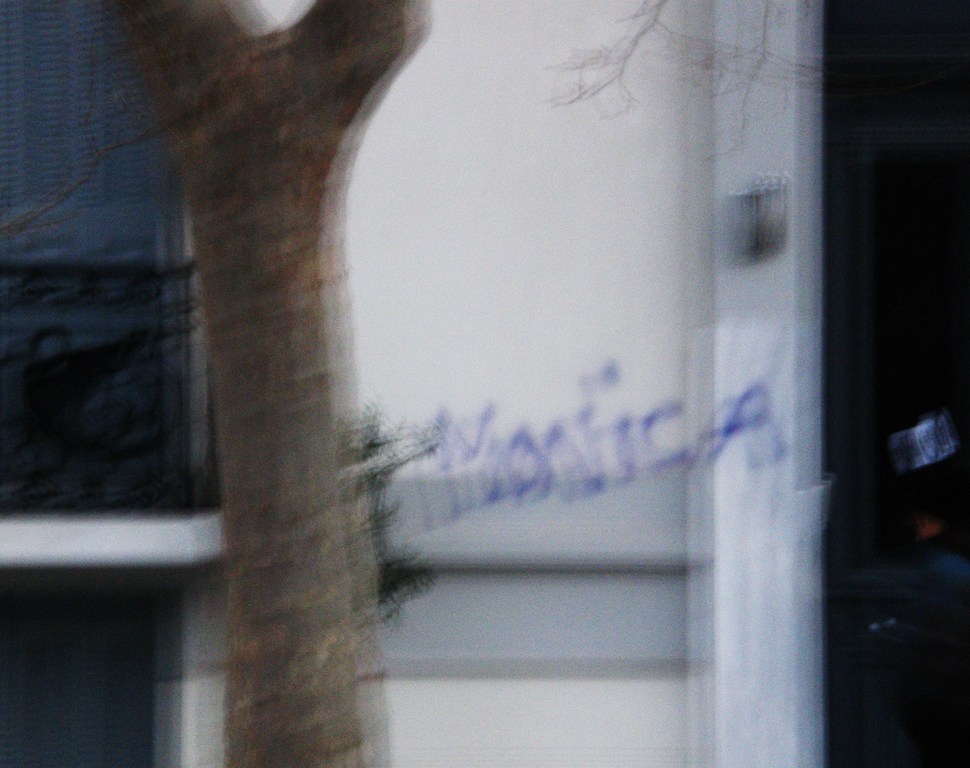 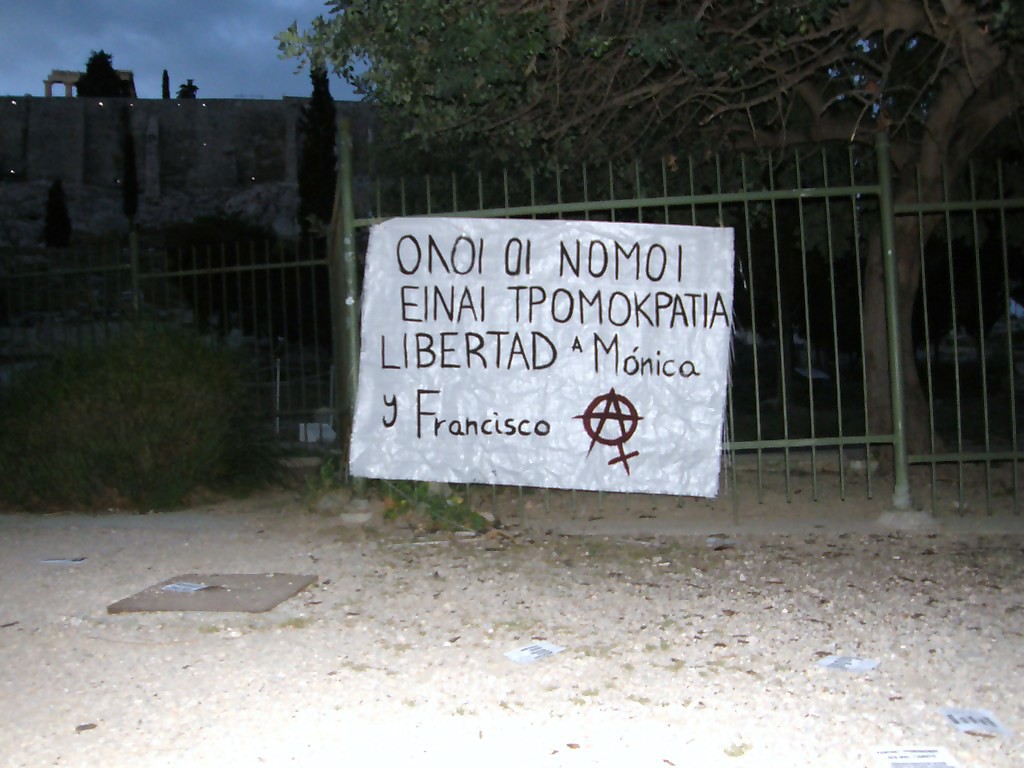 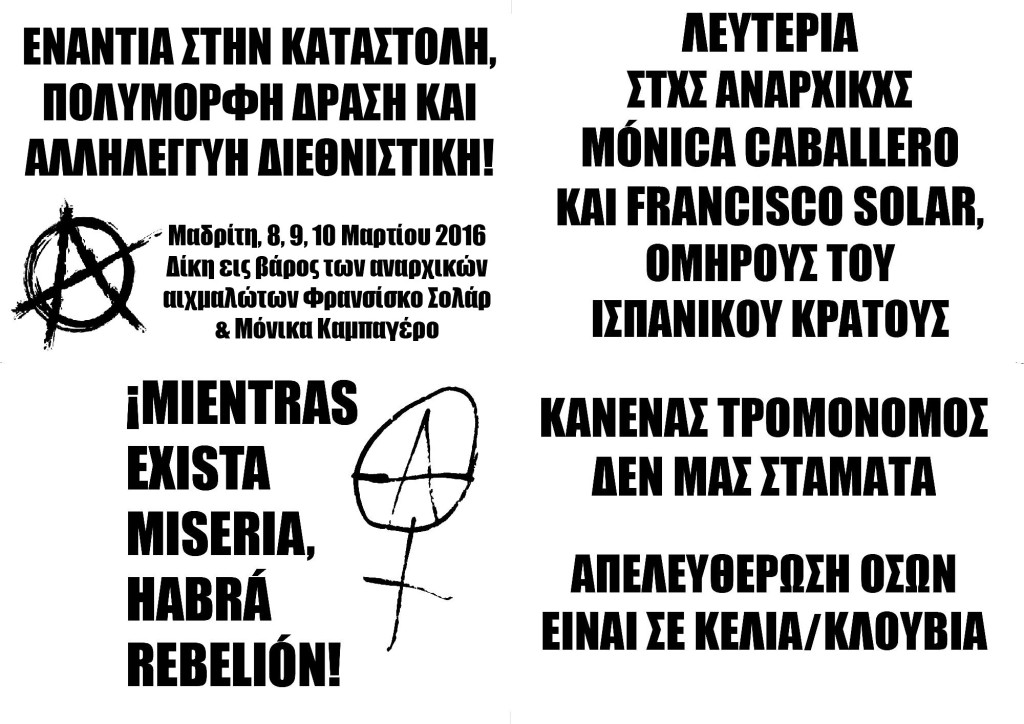 Also, the following text was handed out in Greek and English:

| On the occasion of this year’s 8th March …

8th March is widely known to us as women’s day, internationally established as such in the early 20th century.

The same date may remind us the 1921 execution of the Spanish Prime Minister Eduardo Dato by shots of Catalan anarchists in Madrid.

The 8th of March marks the beginning of the trial against two anarchists from Chile, Mónica Caballero and Francisco Solar, who are currently held in the prisons of the Spanish State.

Back in time, in Chile:

In August 2010, following police raids in squatted spaces and houses in Santiago and Valparaíso, Mónica and Francisco were among comrades captured under the anti-terrorism law, in the so-called “bombs case” (caso bombas). Both were remanded for more than 9 months. Then, together with other co-accused, they faced one of the longest trials with their convictions intact.

It’s probably worth mentioning that earlier, in December 2009, the Chilean police had raided squatted spaces to “prevent” an anarchist attack against the then electoral process. One of the houses raided was the squat La Crota, where Mónica Caballero was also living at the time. During the trial of the “bombs case”, the prosecution demonstrated “findings” of that raid, such as posters against the Church, trying to connect Mónica with the placement of an incendiary device against a catholic church in Santiago.

“Each time I sit in the dock I feel dirty being part of this democratic process; I have nothing to prove to any judge; the only opinion that matters to me is that of my accomplices to the crime of fighting for freedom and anarchy; they want to incarcerate me for not kissing the cross of repentance, for not lowering my head…”

Eventually the sensational trial of the “bombs case” ended in a fiasco, and in June 2012 all of the prosecuted were acquitted of all charges.

About one and a half year later, on the other side of the Atlantic Ocean, Mónica and Francisco were captured again – this time in Barcelona. In November 2013, they were remanded under the anti-terrorism law for actions against the ecclesiastical institution in Spain.

From the first moment of their arrest, the media scum contributed greatly to the anti-anarchist propaganda of cops and judges, while it became clear that Spanish and Chilean repressive mechanisms were in good cooperation.

From the first moment of their arrest, the two comrades – once again – made their stance crystal clear: neither innocent nor guilty.

Mónica and Francisco are charged with placing an explosive device that went off in a cathedral of Zaragoza in October 2013, as well as conspiracy to prepare another attack which was supposed to take place in a monastery of Barcelona. They are accused of alleged membership in ‘Insurrectional Commando Mateo Morral’ (a group that has claimed responsibility for the placement of two devices: one at a cathedral in Madrid and another in the aforementioned church of Zaragoza). According to the accusatory dossier, both are also prosecuted for participation in FAI-FRI (Informal Anarchist Federation-International Revolutionary Front) and GAC (Coordinated Anarchist Groups), although the responsibility claims by ‘Insurrectional Commando Mateo Morral’ make no reference to the specific acronyms.

“We understand solidarity as constantly putting our anarchist ideas into practice, in all their forms, making the enemy understand that nothing ends here, everything continues in the prison or the streets.”

| words from Francisco & Mónica in December 2013

The trial against Francisco and Mónica takes place on 8th, 9th and 10th March 2016 at Audiencia Nacional in Madrid, the highest judicial body that predominantly carries out “terrorism cases.”

This year’s 8th March, date of the scheduled start of the trial against Francisco and Mónica, we send a signal of internationalist complicity to the two anarchist comrades, who remain unrepentant in the Spanish dungeons.

OUR STRUGGLE AGAINST THE CHURCH, STATE, CAPITAL, PRISON
IS MUCH STRONGER THAN ALL THEIR LAWS OF TERRORISM