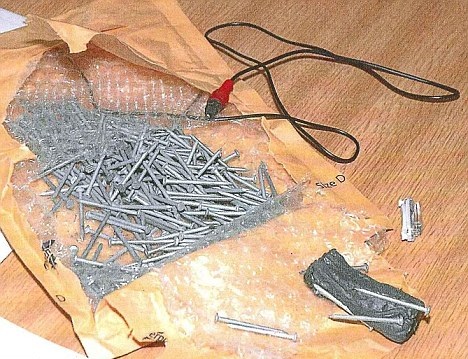 According to the Greek press, on July 28 police reported another parcel bomb was sent to a state judge, in this case it was sent to the bastard P. Houzouris, who received a parcel bomb at home packed with nails and razor blades. [1]

After finding the suspicious package that was disguised as a book, the judge notified police. An anti-explosives squad then proceeded to detonate the device.

According to police, the parcel bomb was similar to the one that was sent in June to judge Isidore Ponga who presided over the judicial council that rejected a 2015 request for the release of Evi Statiri (wife of Gerasimos Tsakalos, member of the Conspiracy of Cells of Fire). [2]

The Greek press and the police are again trying to link our comrades from the Conspiracy of Cells of Fire to these attacks, this time pointing the finger at the comrade Christos Tsakalos who referred in a statement to a major trial that the judge P. Houzouris is presiding over.

The statement in question was published in Greece at the end of June. In it the comrade refers to the trial that the judge who received the parcel bomb presides over. The trial is known as the ‘Noor 1′ trial, named after the boat on which a shipment of heroin was found. Comrade Christos, along with pointing out the inquisitor role of the judges also expressed in his statement: “Faced with the arrogance of the judges and the authorities who enjoy life like small gods in the throne of their offices, we must use the strategy of the anarchist urban guerrillas”. [3]

With this statement the Greek media and police are linking the comrade with this new attack, however, no group has claimed responsibility for either of the parcel bombs.