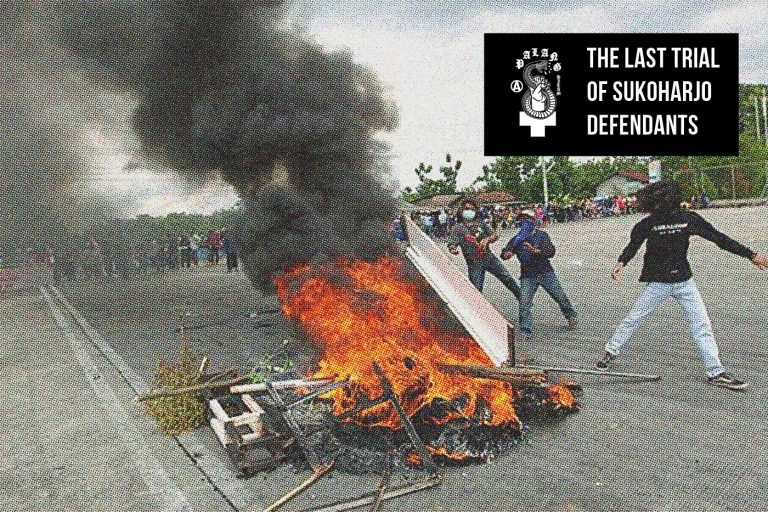 07.08.18: The 7 prisoners from Sukorharjo charged for involvement in the the riots outside the PT. RUM synthetic cotton factory faced their final hearing on Tuesday, August 6th. The riots followed on from the demonstration that took place in front of the factory due to it emitting a foul, toxic odor. The demonstration descended into a chaotic riot that led to the torching of security posts and clashes with the police and soldiers. The 7 prisoners have been detained since their arrests in February 2018. The trial was chaired by Chief Judge Sigit Hariyanto. The sentences of the 7 prisoners were as follows:

The first 3 defendants were convicted for violating Article 406, paragraph (1) of the Indonesian Criminal Code regarding “the destruction of property belonging to another person”. The judge’s sentencing was lighter than the demands of Prosecutor Rohmadi who was seeking 4 years and two months imprisonment for Iss and 4 years imprisonment for Sutarno and Brilian.

The last 4 defendants were charged and convicted for violating Article 187, paragraphs (1) and (2) along with Article 170, paragraph (1) of the Criminal Code.
The sentences for Danang and Bambang were lower than what the Prosecutor was seeking – the Prosecutor was seeking 4 years imprisonment and a fine of 50 million Rupiah for Danang and 5 years imprisonment along with a 50 million Rupiah fine for Bambang.

This entry was posted on Wednesday, August 8th, 2018 at 8:32 am and is filed under Prison Struggle.