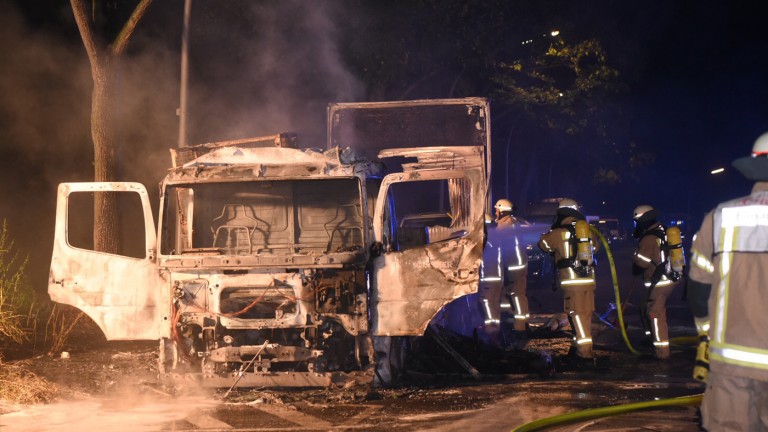 We burned a truck of DB Schenker in the night to August 8th in Berlin-Wedding. When Erdogan arrives in Berlin on September 28. / 29., he will find our hostility here. Who rolls out the red carpet for the fascist Erdogan – X Day – is supposed to feel the ashes of the burning city in the nose.

Already since the year 2000, the ESG Elektronicsystem- and Logistics company runs together with its partner Schenker Germany AG (DB Schenker) the headquarters of logistics – called ZEBEL – of the German Armed Forces (Bundeswehr) in Kassel. From this hub with 17.000 square metres occurs the supply of civil partner companies and military repair workshops, which maintain Bundeswehr systems and vehicles. The transport of war material has most priority for DB Schenker. With it, the subsidiary company of Deutsche Bahn is responsible for the logistics and supply with NATO equipment to the Turkish Army in their war against the Kurdish areas.

We also join the responsibility claims for the recent attacks against Deutsche Bahn in Frankfurt and in Berlin. The flow of capitalist goods and services should not only interrupted by destroying cable and radio connections, but also by destroying of hardware.

The detentions in Frankfurt on June 27, the house searches for an action at the Bundes Press Conference and the countless attacks against Kurdish structures, are part of an increasing repression in Germany and are the attempt to make international connections against the dominion more difficult. It is clear, that this connections against the interest to dominate by individualization, are dangerous for the keepers of law and order. Anarchist and autonomous affinity groups, who already took up the asymmetric resistance in the European Fortress and Middle East, have to overcome the sections of struggles and, referring to each other, attack the pillars of dominion.

However little the campaign fight4Afrin has come to an end, only because this conflict disappeared from the front sides, the solidarity actions for the G20 prisoners will only stop, if nobody is persecuted anymore. Also for this people the truck was burned in Wedding. Just the same we wanted to support all prisoners of social war in the detention centres of the system.

Let us intensify the attacks against structures of war. DB Schenker with its presence in 140 countries, may be a suitable target for our pyromaniac friends everywhere.

(source and translation from https://de.indymedia.org/node/23410)