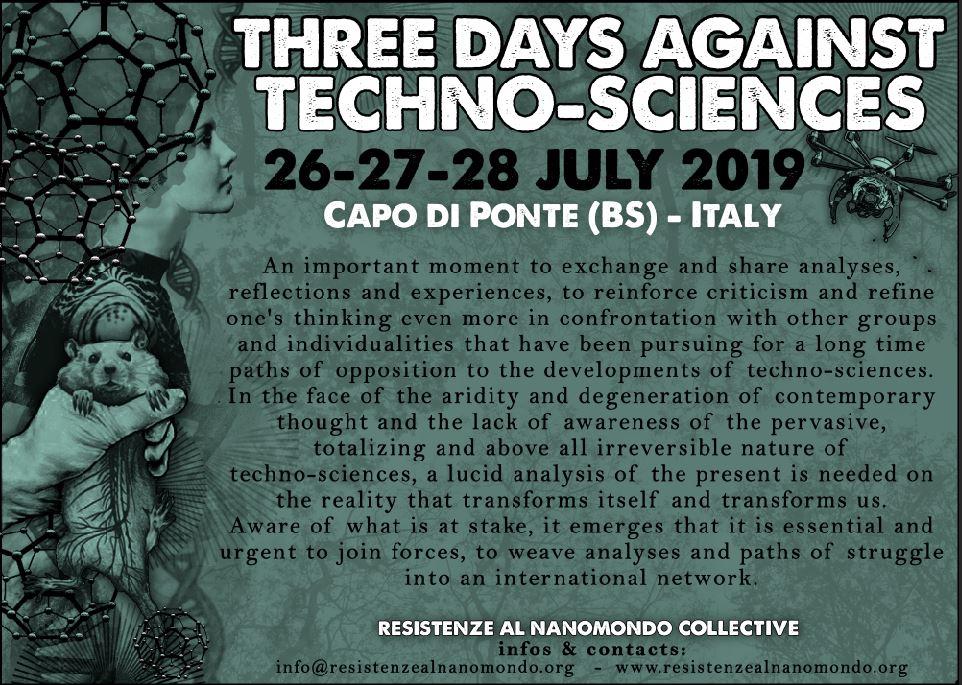 21.00 The non-neutrality of the technique/technology
The dominant thought treats techniques and technologies as simple tools at the service of human desires. To this idea, normally, it is usual to add the idea of an indefinite and continuous progress that makes the trajectory of technological development a universal and indisputable destiny of the human being. These notions reinforce the paradigm of technical neutrality. In this debate we will try to destroy these notions and build a broader proposal that will allow us to understand techniques as social creations, as non-neutral elements.
Adrián Almazán Gómez, member of the Cul de Sac Collective and the publishing house Ediciones El Salmón (Spain), Nicolas del groupo Écran total (France)

9.00 The dangers of postmodernism, rethinking nature in the era of the artificial
It’s been several decades since the dominant paradigm of thought is what we know as “postmodernity”. One of the most dangerous effects of its hegemony was the way in which the concept of nature was attacked. With the excuse of putting an end to all essentialism protected by the idea of “natural”, postmodern thinkers have implemented a crusade against nature that claims to reduce everything to an artifact under our control. Today, all the critical thoughts have the obligation to criticize this delirious idea and return to give space to nature.
Adrián Almazán Gómez, member of the Cul de Sac Collective and the publishing house Ediciones El Salmón (Spain), Nicolas del groupo Écran total (France)

15.00 Can Machines Produce Communication?
Communication automatics in digital networks and electronic mediation of the social factory
Networks are a basic infrastructure of the western developed societies, for which major investments are needed, both material and ideological. The advance of artificial intelligence brings forward the question if machines can be smarter than humans. Modern digital communication, which establishes the machine as a node rather than humans, contributes to the transformation of social relations in a way that eludes us. Digital secretaries thus appear as the saviours who shall organize our everyday life through algorithms. In the end, within the game of automation, will we be players or pawns?
GameOver Collective (Greece)

21.00 It’s time to shut up the machine and get the bodies talking again
The news of the children edited in China is another of the thresholds that have been crossed from which no one can think to go back. Artificial reproduction is a central issue: it means putting the dimension of procreation in the hands of the techno-scientific system, at stake there is a profound and radical transformation of the human and the entire living. The body, the bodies are at the center and increasingly under attack, taken in a grip: on the one hand the techno-scientific system and the bio-market have more and more need of them and they hoard it up to their vital processes, on the other hand their ideologies deconstruct and fragment them. A fluid body, without boundaries, without limits, protein-shaped, porous, malleable and infinitely manipulatible. In times of transhumanist re-signification and the cancellation of reality itself, a reflection to understand and face the new challenges of the present and the non-sense that spreads with ardent and profound awareness of an urgency and a priority. In post-modern dissolution and indeterminacy there is no need for doubts about the road that power is increasingly shaping and the road to take to derail the machine.
Silvia Guerini, Resistenze al Nanomondo Collective (Italy)

9.00 The necessity of resistance
Fighting against exploitation in these times of the new techno-totalitarianism first of all means realizing that the same premises that make us feel and desire a free world are corroded. The same conditions that make life on the planet possible are eroded and also remind us that we are animals among a multitude of other animals that in turn need an intact environment in which to live. The artificial world is changing relationships and emotions in virtual dreams and synthetic environments, and this can only produce GMO chimeras and worlds of Artificial Intelligence. The techno-world destroys and manipulates every freedom from the root, rewriting a history that comes from laboratories and uses the language of war to survive. The resistants in this process will not only risk to remain behind, lost in struggles without content, but also they will take much longer to understand the process, to decipher it in order to be able to explain it. In this generalized nonsense, a reaction that can no longer be expected is urgently needed; not being just accomplices is no longer sufficient. And who knows if the seed of freedom will be the hard one to die.
Costantino Ragusa, Resistenze al Nanomondo Collective (Italy)

How to get there

FOR THE WHOLE THREE DAYS:
– FREE CAMPING, BRING YOUR TENT
– FOOD WITHOUT ANIMAL EXPLOITATION AND WITHOUT POISONS
– TOILETS AND INDOOR STRUCTURE IN CASE OF RAIN
– DISTRIBUTION OF INFORMATION MATERIAL: BRING BOOKS, NEWSPAPERS, TEXTS YOU WANT TO SHARE
– EXHIBITIONS

Help us to organize the meeting in the best way, let us know in advance of your presence.