Mobilization for the Trial of Silvia, Costa & Billy (Switzerland)

Freedom for Silvia, Costa & Billy – Solidarity with all the Revolutionary Prisoners

All meetings will be held in “Casa del Popolo” in Bellinzona, Switzerland, (in front of the train station). As well as the presence during the hearings there will be demos in the city throughout the week.

18 July – 6pm : Struggle against Nuclear Plants
Contributions of past and ongoing experiences. Debate about the possibilities of intervention. Updates on Marco Camenisch

21 July – 6pm : Debate about the importance of solidarity for the revolutionary movement
Information about other trials, like the one that will be held on September 28-29-30 against a comrade of Aufbau and SRI

In April 2010 Silvia, Costantino and Billy were arrested close to Zurich and since then, accused of wanting to attack an IBM laboratory of nanotechnology research with explosive material, they are imprisoned in the Swiss jails. A little more than a year after our comrades are going to be processed (July 18-22) while IBM laboratory “Binning and Rhorer nanotechnology centre”, which opened last May, will be starting its horrible projects. IBM, American corporation pioneer in nanotechnology, through miniaturization of electronic components on nanometric scale would like to transform human beings, animals, natural environment and infrastructures into gears of a mega-machine for life’s absolute control. END_OF_DOCUMENT_TOKEN_TO_BE_REPLACED

ELF-Russia claims responsibility for firebombing of a Lexus/Toyota car dealership in Western Moscow on June the 21st.

Four luxury cars (of them – 3 Lexus SUVs) were lost to a firebomb explosion (butane gas canisters, gasoline and a fuse), according to corporate media reports.

325 received the following communique from Earth Liberation Front Russia – Informal Anarchist Federation / International Network of Action & Solidarity, about a series of attacks in conjunction with the 11th June International Day of Solidarity with Marie Mason, Eric McDavid and Long-term Anarchist Prisoners. Strength and force to all those imprisoned for their ideas, words and actions of resistance – We will never forget our prisoners of war. For a global insurrectional network based on revolutionary solidarity, direct action and subversion:

“For me solidarity is a constant proposal to struggle, is the continuation and the development of the revolutionary action for which the comrade was captured” – Gerasimos Tsakalos, Conspiracy of Cells of Fire

01.06 we torched electrical measuring and control devices in 2 underground service booths of a water communication system that brings hot water to a military intelligence site in Butovskiy forest. To add to the fact that this infrastructure serves military personnel, more than 800 trees were cut during earthworks for this water supply line to even appear in the forest. To hamper service brigades further, we also spiked the road they use for maintaining the system.

05.06 we torched an excavator at a highway construction site west of Moscow (Volokolamsk direction).

06.06 and 10.06 we expropriated some construction equipment and destroyed geologists’ measurement posts in the glades of Butovskiy forest.

11.06 we broke into yet another underground service booth and put to fire all the digital and analog devices and tools inside.

We dedicate these attacks to Marie Mason and Eric McDavid. We don’t have the honour of personal acquaintance with them, but their dedication to protecting our Planet and conscious choices they’ve made not only to act, but also to stand their ground in the wake of state repressions, inspire us and help us to continue on our path.

Note: APECO = Aurora Pacific Economic Zone and Free Port, a huge capitalist industrial development threatening the lives and environment of a large number of people, animals, fish and nature, whilst being promoted as an ‘ecological development’ by the insidious ‘green-wash’ public relations of professional advertising companies. 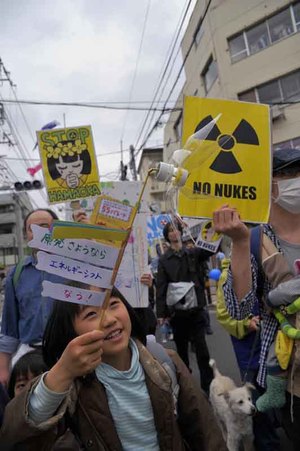 On 7th May 2011, more than 15000 protesters joined May 7th, No Nukes Demonstration!!!!!, which was held at Shibuya, Tokyo. The march was fabulous as diversity of participants gave their voices of no nukes heard. However, the police hindered the demonstration in deploying large amount of riot police which divided the demonstrators into smaller blocks. Due to riot police distraction, it took three hours for all the demonstrators to start walking under the rain. Riot police often stopped the march by surrounding the marching blocks. A list of malicious acts of the police could be endless. Many of participants reported on Internet how riot police were evil to the protesters. If no police distraction, the protesters would have fully enjoyed freedom of demonstration. END_OF_DOCUMENT_TOKEN_TO_BE_REPLACED

Call for an escalated Anti-Genetic Engineering Struggle from Silvia, Costa, Billy, and Marco on hunger strike May 1 to 28 (Switzerland)

From Culmine, translated by War on Society:

From May 1 to 28 we undertake a new hunger strike on relays of seven days each, as a new joint initiative to provide continuity for the links and relationships already intertwined with other strikes and many initiatives of solidarity and struggles outside of prison, and also in response to attempts by the Swiss Federal Prosecutor and by international repression to denigrate, isolate and stamp out the struggle.

Attempts that will always be in vain in the face of our determination not to break the thread that binds ourselves to you comrades outside but instead continue to weave together, as part of the revolutionary movement, the movement of Earth and Animal Liberation. END_OF_DOCUMENT_TOKEN_TO_BE_REPLACED

Tukijo, one of the peasant resistance fighters against iron sand mining in coastal Kulon Progo, Indonesia has been tricked and abducted by police in a planned manner to meet the industrial interests, on Sunday, May 1st, 2011 at 11:00 pm. END_OF_DOCUMENT_TOKEN_TO_BE_REPLACED “On the afternoon of Thursday the 21st of April 2011 we visited the Indonesian Embassy in London, UK to deliver a letter to the Indonesian Government in Jakarta. This was done in solidarity with the people of Kulon Progo, whose lives and land are threatened by the Iron Sands Mining Project being carried out by the Australian Mining Company PT Indomine and the Indonesian State. We also visited the London offices of the Anglo Pacific Group round the corner in Mayfair to deliver the same letter to be sent to Indonesia and Australia. Anglo Pacific Group holds royalties in PT Indomine.
END_OF_DOCUMENT_TOKEN_TO_BE_REPLACED

From 2nd of 9th of April 2011 and after, actions to defend “Khimki hostages”, Alexei Gaskarov and brothers Maxim and Denis Solopov were organised in six countries and 25 cities. Alexei Gaskarov and Maxim Solopov are currently out from jail, in court facing charges following from a demonstration, which was organised 28th of July 2010 in Moscow suburb of Khimki against construction of Moscow-St. Petersburg toll road, and the gross human rights violations against its opponents. Denis Solopov has been granted an UNCHR refugee status in Ukraine, but in beginning of April he was detained and is currently waiting his deportation court in Lykyanovka prison of Kiev.

“Just before midnight on Monday night some angry souls with paint descended upon the Shell offices at Duckmaster near Bolsover (not far from Chesterfield), They proceeded to paint the doors and windows in red and black, with a hint of green for good measure.

This action was carried out as small gesture of love and solidarity with those fighting against Shell in County Mayo Ireland.

This was done with rage against Shell, one of many multi-nationals who continue to rape and pillage the planet in the name of profit.

This was done because we are anarchists who are in love with this planet, and willing to strike wherever and whenever we see fit in order to defend it from corporate greed.

We know this action alone will not stop Shell, but it is a manifestation of desires to see harm done to those who destroy the planet and every living creature on it. We will continue, we will build and develop skills, we will strike again.

We encourage others to express their desires for the defense of the earth, and those with similar inclinations to take action against Shell and all other multi-nationals throughout the summer. “

APECO = Aurora Pacific Economic Zone and Free Port, a huge capitalist industrial development threatening the lives and environment of a large number of people, animals, fish and nature, whilst being promoted as an ‘ecological development’ by the insidious ‘green-wash’ public relations of professional advertising companies. This is a report 325 received from our correspondent there:

Last April 7 and 8 (2011), a huge crowd of approximately 500 people participate to support the two days Anti-APECO Caravan Rally. This people are came from different sector such as farmers, fisherfolks, students, womens sector, indigenous community and churches. They are all against the APECO development because of the unlawful, inhumane and destructive aspects of this governmental project that will affect the natural resources, livelihood and all the inhabitants that already live here. END_OF_DOCUMENT_TOKEN_TO_BE_REPLACED In Albano Laziale, near Rome, there was an action made by eco-anarchists against a developing local open rubbish-dump where an incinerator is planned. The rubbish-dump is a huge hole of approximately 40m of great depth more than a soccer-field. The comrades were able to infiltrate the facility despite the presence of employees and security. Many different parts of the facility were sabotaged including 2 excavators, 1 truck, 1 seam compressor, various hydraulics, various electrical works etc. Sand in the tank of one vehicle. Stolen documents of the service yard, including building plans and photos of the intense activities in the yard.

“Direct Action in Defense of the Earth”

International day of action called by American comrades for the long-term revolutionary eco-anarchist prisoners under severe prisons conditions and subject to FBI & prison authority repression. The day is also called for all long-term anarchist prisoners around the world.

International Day of Solidarity for Marie Mason and Eric McDavid!

June 11th began as an international day of solidarity with long-term anarchist prisoner Jeff “Free” Luers in 2004. At the time, Jeff was serving 22+ years. Infuriated by the environmental devastation he saw occurring on a global scale, Free torched three SUVs at a car dealership in Eugene, Oregon (OR). The sentence imposed on him was meant to send a clear message to others who were angered by capitalism’s continued war on the Earth’s ecosystems – and to those who were willing to take action to put a stop to it. Free is, after all, not alone in his concerns about climate change, fossil fuels, pollution and genetically modified organisms.

After years of struggle, Jeff and his legal team won a reduction in his sentence and he was released from prison in December 2009. But in the years intervening Jeff’s arrest and release, the FBI had carried out a series of indictments and arrests in an attempt to devastate the radical environmental and anarchist communities. Two of the people caught up in this maelstrom of repression were Eric McDavid and Marie Mason. END_OF_DOCUMENT_TOKEN_TO_BE_REPLACED