Because this world is totally subjugated by a system, the State-Capitalism, that devastates the planet and exploits and oppresses all life forms within it. Because in this system, a few privileged ones hold power, economic as well as social or political, and they use it as an instrument for subjugating the rest to the misery of its domination and domestication, through patriarchy, the state apparatus, and the economy, condemning thousands to death, to poverty, and condemning all those who rebel to repression, prison, punishment…

For all these reasons we have to rise up in war against the system and against all those who operate or directly support it: the rich, politicians, police, judges, journalists, and other trash. And to teach by example we try to do our little part so that this trash is also sometimes on the receiving end, via revolutionary violence, of the repercussions of their rottenness; so that at least they don’t sleep tranquilly and so that they feel that at any moment their property, their companies, their institutions can become the target of our rage.

-A bank (Savings and Pension Bank of Barcelona) in the Sagrera neighborhood with the use of a homemade incendiary device consisting of flammable liquid, a homemade initiator, and a slow fuse.
-A Santander bank branch on Passeig Maragall, through the destruction of its windows.
-15 bancs in Gracia through the gluing of their doors and cash machines.

We want to dedicate these small gestures of attack to all the insurgents across the globe, with a special eye towards the 10 anarchists incarcerated in Chile on hunger strike, prisoners within the so-called “bombs case.” For them and all the other indomitables an insurrectionary greeting.

Revolt and sabotage are easy and reproducible. Anyone in any place can, individually or collectively, put them into practice. Let us extend the attacks against this infected system, and solidarity towards those who suffer it and towards those who are repressed by it.

We promise more and better.

Death to the State and long live Anarchy

translated from lahaine.org via anarchistnews.org The action lasted for over 4 hours before a specialist police team from Glasgow removed the people occupying the excavator, which was in the process of loading coal from the seam on to dump trucks. Police arrested four people, two of whom were only supporting the action, and all have been charged with aggravated trespass. END_OF_DOCUMENT_TOKEN_TO_BE_REPLACED

It has almost been two weeks since we began the hunger strike, yet I did not have to wait for your solidarity, and your beautiful gestures have cast light into these dismal halls.

The traps of the persecutors are made to break or mold their own laws in order to create “new figures”. The decisions that will come into effect the 16th of March share these same characteristics, those accused in the “Caso Bombas” may face new charges (the best excuse to prolong preventative detention.) END_OF_DOCUMENT_TOKEN_TO_BE_REPLACED 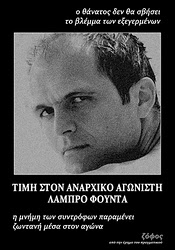 On 10 March 2010 a revolutionary anarchist comrade fell in struggle against the murderers in uniform of the Greek democracy. Lambros was a known and loved fighter and friend to many people and his death will be avenged by our fight against the system. Continuation of the struggle that Lambros felt in his heart is our best dedication to the eternal spirit of freedom which he fell fighting for.

To all comrades, known and unknown, on the earth and with the stars, love and respect.

genuine anguish for the choices, the tomorrow, the comrades, the struggle.

With sharp thoughts, forged in the bowels of personal labour and the movement.

You showed with your life that the way of the revolutionary is to say little, to act with rage and devotion. With rage and conscience.

In your memory fists tighten…

And in death a wolf

breath was enough for you, one decision and the iron will.

With the weapon in your hand and freedom in your eyes you chased your dreams to the end.

As you lived, this is how you left. Wild and free.

they are not lost

They ride a star and draw courses of freedom in the indefinite.

They draw with their blood what each one of us dreams but is afraid to dare.

They are fireflies in the darkness of inertia.

They are the fire, the struggle, the street.

Lets all take the fire from their fire…

“During the week of the 22nd to the 27th of February this year [2011], we sent two explosive packets to the directors of two penitentiaries; to the director of the Reclusorio Preventivo Varonil Norte and to the director of Centro Varonil de Readaptación Psicosocial (CEVAREPSI), both of which are prisons in Mexico City, as we know it this action was completely covered up and censured. END_OF_DOCUMENT_TOKEN_TO_BE_REPLACED

To Rediscover our own History is to Unearth Hope (Indonesia)

People on the left consider the anti-authoritarian movement, and especially the anarchists, as something that is childish or just imitating the west, the creation of people that do not yet understand their own identity. Their reasoning is straightforward, because there is no anti-authoritarian history in Indonesia. Indonesian society, we are told, is a feudal society that is not capable of acting without a command structure and an elite leadership; the actions that are glorified by adherents of anti-authoritarianism always refer to Western states. That’s because, they say, anti-authoritarianism and anarchism are absolutely irrelevant in the Indonesian context.

But let’s take a look just how these people on the left have only one talent: to lie. END_OF_DOCUMENT_TOKEN_TO_BE_REPLACED

You might have heard that Greece is a beautiful country to visit with delicious food and people with great hospitality. Be careful: this is not the whole truth. The reality for hundreds of thousands of visitors is completely different. There is a general threat of human rights’ violations. END_OF_DOCUMENT_TOKEN_TO_BE_REPLACED

Letter of Solidarity to the Chilean Comrades on Hunger-Strike (Greece)

Freedom, as well as bars are firstly and mainly in our heads. There are however moments where it becomes perceptible and with particular intensity the existence of walls around us. Moments where under other circumstances we would risk our skin in order to leave the flames to warm people that are fighting far from us, people that we do not know but we feel them reflecting our egos and what we desire on the other side of the world. END_OF_DOCUMENT_TOKEN_TO_BE_REPLACED

Update on the Conspiracy of Cells of Fire Trial (Greece)

The comrades today asked for the actions that are attributed to them to be recognized as political. At the same time they submitted procedural objections for bad composition of the court as well as for the declaration of the official charges as vague. The objections were rejected repeatedly. END_OF_DOCUMENT_TOKEN_TO_BE_REPLACED

On the 30/3/2011 the trial for the case of “the robbers in black” will take place in the first degree, regarding the January 2006 National bank robbery on Solonos st., central Athens, and six more bank robberies. It is the same case for which Yiannis Dimitrakis was finally sentenced, in the second degree, to 12,5 years of imprisonment. This time Simos Seisidis, who had been a fugitive for 4,5 years, is in the place of the accused. END_OF_DOCUMENT_TOKEN_TO_BE_REPLACED

The following is a statement from Jason Campbell, an inmate in Ohio State Penitentiary where Lucasville uprising prisoners Siddique Abdullah Hasan, Bomani Shakur and Jason Robb recently won significant improvements in the terms of their confinement through a 12-day hunger strike and an international campaign of support. Campbell chose Feb. 27 to start his hunger strike because it is the 38th anniversary of the liberation of Wounded Knee by the American Indian Movement. Since he wrote this statement, the prison has moved him to segregration (the hole) and confiscated as contraband a necklace with religious significance that he had permission to have.

Thank you for your interest in my current plight. I am grateful that there is at least one voice still willing to speak up on behalf of those in my position. END_OF_DOCUMENT_TOKEN_TO_BE_REPLACED

The Authorities Have Taken Another Hostage in the Khimki Case (Ukraine, Russia)

Denis Solopov, who took part in the action outside the Khimki town hall on July 28, 2010, to protest the lawlessness of local authorities and the clear-cutting of the Khimki Forest, has been detained in Kyiv by local police. END_OF_DOCUMENT_TOKEN_TO_BE_REPLACED

NEWS for anarchist comrade Simos Seisidis. From the court, relating to incidents in Petras Theatre, Athens, in 2000 and the forensic report following his arrest, concerning his wounding from behind by a cop, and subsequent amputation of his leg.

On Friday 18 / 2 the trial started about the incidents in the Rage Against The Machine concert in theatre of Petras in the summer of 2000 in Athens. It was interrupted, and was finalized on Friday 25 / 2. Simos Seisidis was acquitted of all charges by a vote of 7- 0 to the line of the prosecutor’s proposal.

He belonged to the group of six anarchists whose names were given by the media and two police officers as ringleaders of the attacks. In the trials that followed the police retracted their statements, as happened now with one of the two cops that appeared in court. END_OF_DOCUMENT_TOKEN_TO_BE_REPLACED

On the 9th of March 2011 the urban justice is to judge in a public procedure my “case”. A “case” that was manufactured in the biological laboratories of GADA (central police headquarters in Athens), but was not in any case a product of science fiction.

The political character of my prosecution can, I believe, be summarized in a abomination of the interrogative proposal, with which it was attempted to confirm the decision of my imprisonment. Immediately after the monotonous effort to support the sole, and this of minimal importance, evidence that the police brought as proof of guilt – a surgical mask with my DNA-, the interrogator continues as follows: “Testifying, anyway, the defendant, in his own phraseology, declares himself an anarchist, does not hide his subversive action, he includes himself in the anarchist movement, he considers himself a revolutionary and he wishes to reverse this world, being included in the daily struggle against the state and capitalism”. END_OF_DOCUMENT_TOKEN_TO_BE_REPLACED