A few days ago a comrade in Lecco found unwanted guests in his car. Some nice bastard had in fact placed, linking it to the electricity supply of the light of the passenger seat, a bug made from a modified cellphone, and aerial, a GPS sensor and a microphone (see photographs). The instrument was placed between the bodywork and the inside covering, fixed by two magnets. END_OF_DOCUMENT_TOKEN_TO_BE_REPLACED 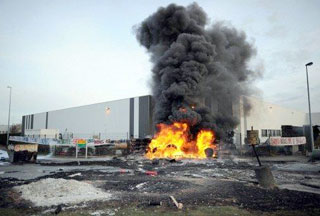 “A Molotov cocktail was thrown at a Serco government services building in Nottingham on Saturday at 4am.

Serco are a giant corporation who profit from the nuclear industry, industrial prison complex and the murderous border regime.

Fire to the Prisons”

On Sunday, June 27 2010 at 5pm there will be a Demonstration Against Prison in Toronto. Anarchists are organizing the demonstration as a part of the larger mobilization in opposition to the G20 meetings. END_OF_DOCUMENT_TOKEN_TO_BE_REPLACED

Declaration to the court read by one of the Turin anarchist antiracists arrested on February 23 2010.

Most defendants in this trial are anarchists, and to accuse anarchists of ‘instigation to committing crime’ is a very easy task, just as to shoot at the Red Cross. END_OF_DOCUMENT_TOKEN_TO_BE_REPLACED

Posted in No Borders |

Written by some anarchists in Belgium

Athens. Greece. At two thousand kilometres distance. A nearly bankrupted Greek state and an economy that doesn’t function anymore. On the advice of the European Union, the ruling socialist party calls for a series of economic measures and restructurings. The ministers swear it will take “blood, sweat and tears”, but “it’s the only option”. Roads, harbours, airports, borders, factories, railroads,… have frequently been blocked since January, blocked by those who know they’re the ones who’ll pay the price. Manifestations follow each other up and not a single politician seems capable of calming down and canalising the protest. END_OF_DOCUMENT_TOKEN_TO_BE_REPLACED

A Moment of Shame, You Scum (Greece)

Translated from the Greek original circulating on the streets of Athens, by anarchist comrades.

Silence, Everyone shut up.

Even if just for a second, shut up.

No more screams and dramatic descriptions of terror from you, the slimy “police editors” that feed off the blood of the victims and the police information.

Gradisca, Italy, 14th March
An afternoon of tension in Gradisca’s detention centre. After a few hours of being locked in their cells without an explanation the detainees started a protest and decided to refuse their meals which the guards wanted to put through the doors “as if we’re dogs”. The guards raided all the cells, and caused more protests followed. END_OF_DOCUMENT_TOKEN_TO_BE_REPLACED

In The Most Free State of the World (France)

Since 1945, they want us to believe that the most serene freedom has arisen in our lifetime; now that housewives have access to all the best household appliances, now that almost everyone has the right to vote, now that “freedom” of speech is guaranteed by the democratic institutions, now that we are left with the listing of false choices- between exploiting or being exploited for nothing at all, and without trying to understand why, threatened to be quashed. Our anxiety and our thirst for liberty do not falter, though that is what it’s all about when the State parrots out its ideas of freedom, democratic and industrial progress. END_OF_DOCUMENT_TOKEN_TO_BE_REPLACED

( Political raids in Turin against Anti-Racists (Italy) and Solidarity attack against Red Cross in Paris (France) ) :

“March 12th: Andrea, Fabio and Luca have been liberated and under judicial control, waiting for their trial”

Some thoughts from Moabit Prison (Germany)

… A letter from Berlin.

The cell is 6.20 × 2.60. It has a door with a peep hole and there’s a window. In front of it are thick bars which are already corroding, do not worry, they still keep doing. Probably the next one hundred years. Behind the bars, there is a tightly woven wire mesh to make sure the prisoners cannot exchange things. END_OF_DOCUMENT_TOKEN_TO_BE_REPLACED

“At 2am on 17 March, anarchists attacked the inner-city probation offices in Stokes Croft, Bristol.

Paintbombs were thrown, the windows destroyed, were to personnel gates locks attached and slogans ” No Prison – No State” and ” For Lambros” on the walls were spray-painted. This activity is inaugurated on the death of our comrade Lambros of Athens in Greece, who was murdered by cops and represents part of our active denial of the control system. This attack came also in solidarity with Alfredo and Christos, with G20 and Gaza defendants, and with all prisoners who fight.”

The struggle of those who fight against all forms of power, who are anxious that each moment should not be wasted and who stubbornly maintain the belief that we are capable of creating a free and non-authoritarian world, is as distant from any kind of mythology or fiction as the earth is from the moon.

This struggle has had, has and will have countless casualties; dead, captured, and people who desist because they lose hope or compromise themselves because the powers that be have found the low or high price to buy them off.

Those seeking saints, martyrs or messiahs, or heroes and mythical beasts, are ultimately no different from those who do not miss the opportunity to point the finger at the scoundrels, the black sheep, the criminally suspect and those who politically have already lost. Both the superior beings depicted by one side and the extremist creatures from the other are equally expendable. In either case the purpose is to keep everyone sedated and docile, despite what the proponents of either side might claim.

Some ecstatically speak of those ‘sacrificed’, while the others piously try to measure the political loss. It is of little importance whether this convergence is achieved due to fanaticism or delusion, ignorance or expediency, for reasons of political visibility and survival or practising dogmatism. Those who are supposed to object shout to convince everyone that they have unfinished business with them, but this fraud is difficult to conceal. But so be it. This scenario is true and played to death, but the beaten path is always the most secure. Always? Or maybe it is not?

The following words, and those preceding them, are not the product of an obligation or sense of duty. Nor are they part of any revolutionary obituary. They are far away from and hostile to any attempt to mythologizing, ownership, engaging or disengaging, against the mud slung and the depreciation, which authority is already trying to spread after the disclosure of the identity and photograph of a dead “terrorist” following a gunfight with cops in Daphne. Lambros Fountas, who fell dead in a shootout with the crew of the police squad car in the area of Daphne is known for his anarchist activities.

From his years as a high school student he was socially active and would later join the anarchist group MAVRO AGATHI (Black Thorn), who issued the DROMI TIS ORGIS (Streets of Rage) zine/pamphlet/serial. He was active and participated in marches, rallies, social conflicts, demonstrations, flyposting, discussions and social events.

He was one of the thousands of young people not enrolled at the time with any political youth party involved in the student occupations, demonstrations and clashes prior to and after the murder of Professor N. Temponera in Patras. Those young people were inspired by the insurrectional events of January 1991 as well as anarchist ideas and practices that they appropriated with a vitality which words are incapable of describing. The anarchist group Black Thorn, until its dissolution, participated in the Co-operation of Anarchist Groups and Individuals for Social Solidarity and Diverse Action.

During the occupation of the Polytechnical University of Athens in 1995 for the anniversary of the 1973 Uprising, Lambros Fountas was among the 504 who were arrested by the repressive state forces that invaded the university grounds on the morning of November 18th. He was, therefore, among so many young people of a generation that the politically correct were quick to describe as lost. Among all those who chose their partners’ hand and travelled the 1990s from protest to protest, from roadblock to roadblock, standing in solidarity with passion in every social aspect, who chose to confront power with their rights and their wrongs, their differences amongst themselves and their stubbornness, confounding the authority that wanted them to simply be passers by in the social struggles. Not that there weren’t any such people. Quite the contrary. Since then I have met up with Lambros and been side by side many times in marches, roadblocks and clashes.

We solemnly believe that what the people who fight leave behind them, is what they really contribute and is not superficial to the liberation process from the shackles of oppression and exploitation. This is a legacy that transcends any needs, decisions and choices.

Because the means are not an end in themselves and don’t differentiate those fighting, but rather reveal possibilities, they don’t sanctify those who choose one or another form, nor do they put anyone on a pedestal. There are no unknown comrades who have been unfairly lost. Nor is the point principally, in these situations, the search for operational errors.

Equally, however, we do not agree with the logic that explanations are the privilege of priests, initiates or those well-educated in internal affairs or with those who deal with cases and craft scenarios all the time, that the answer may begin and end with motto: loss is a necessary evil. Our position must be straightforward and outspoken.

We close, saying goodbye to Lambros with an Indian wish (and certainty):”The next time (we meet) will be better!”

On the day of the hearing in Turin (Italy) against the comrades arrested last 23rd February, and accused of « criminal associations » for their struggles against the Detention Centers for Migrants ; one week before the decision of the judge against the 10 accused of the arson of the Vincennes detention in Paris [France], six offices of the Red Cross have been attacked in Paris, in the night of 9th March.

Located in the 3th, 5th, 9th, 11th, 12th and 18th district, they have been covered with posters, and graffiti, while their locks have been sabotaged and some windows smashed. Graffiti like « Red Cross deports », « Red Cross collaborates with deportations » covered the area of some offices.

Solidarity with Turin comrades
Liberty for all, with or without papers
Let’s sabotage the deportation machine !

nb: The International Red Cross are heavily involved with the detention and deportation machinery for migrants across Fortress Europe and beyond, they are considered a target because they maintain and also ‘soften’ in mediatic terms the conditions of imprisonment, without helping those people who struggle for themselves for freedom, their only crime being not holding the ‘right’ identity papers.