Solidarity with the West Papuan Struggle for Independence

U$A: Solidarity from Philly to Kenosha

After the savage shooting of Jacob Blake by police in Kenosha, Winsconsin, solidarity demos took place in United States, including the city of Philadelphia:

The Solidarity with Kenosha, WI demo was more impressive than usual. People met up, discussed the plan, and started promptly. Escalation started right away and continued as a group of over 45 people marched through the streets chanting and smashing windows of banks, business and developments. There was a surprising amount of destruction. One of the most impressive things though, was the strong collective intelligence. There was good communication, barricading, and improvisation. People were decisive about both sticking to the plan and being flexible. Folks caught and lost a police tail and dispersed smoothly due to barricades and quick decision making all the while staying level headed and tight in stressful moments.
We really appreciate everyone who showed up and their energy! The more we do this, the better we get!
Also here’s two things we think we could get better at: Staying in the streets, not on the sidewalks and covering up better (this includes eyebrows, bangs, tattoos etc.) 🙂

Solidarity with trash workers and the recent storm leaving us ample debris.
Solidarity with anarchist prisoners, Kenosha Wisconsin, and everyone consistently turning up and inspiring us.

– The 3rd Annual Summer of Rage

Black August
What Went Down
New Projects
What Next?
Repression Updates
Die-Off Debate
DIY Defunding
Back to School
PSL, Occupations, & Some Better Possibilities

Prisons are places of darkness, of gloom, real life cannot flourish there. Because what is “real life”? It is one in freedom, integrated in friendly relationships, experiencing oneself as an individual. Because we live ourselves and are not lived.

It is not without reason that prison criticism is therefore always also a fundamental critique of society and the system, because within the prison walls the same mechanisms prevail as outside the gates, only in a much more severe form.

ABC’s Solidarity week for anarchist prisoners takes place in a time marked by the Corona pandemic. The pandemic in particular once again clearly reveals the injustices.
Members of marginalized social groups have a disproportionately higher risk of infection, illness and death (which also applies outside pandemic times, but is only currently particularly evident). And those who are in prison are even more vulnerable, because the general conditions, as the Prisoners’ Union (GG/BO) also tirelessly points out, are often pretty lousy. END_OF_DOCUMENT_TOKEN_TO_BE_REPLACED

$hile: Letter by Imprisoned Comrade Francisco Solar for the International Week of Solidarity with Anarchist Prisoners

How can we achieve moments of freedom, even if they are only brief and sporadic? What are those moments where we feel that what limits us loses weight and sense?

The answers can be multiple depending on the interests of each individual, how they understand and situate themselves in this world. Perhaps some people already feel free and these questions are unnecessary because they are alien to the tentacles of power.

Those of us who do not have these kinds of dreams know that the very existence of the State places us in a situation of oppression, a situation that is necessary to fight and attack if freedom is the horizon. It cannot be otherwise.
And it is in that option of attacking that we find true moments of freedom. Since we decided to confront this world and situate ourselves as its enemies, we began to look at our surroundings differently, we began to visualize objectives and their vulnerabilities, we began to see the best way to strike at power, we began to position ourselves on the offensive. END_OF_DOCUMENT_TOKEN_TO_BE_REPLACED

The news of the death of Stuart Christie was communicated to me by telephone, the day before yesterday in the afternoon, by my comrade René after asking me if I was aware of the new bad news and after answering him abruptly: who has died? Well, from the tone of his voice, I immediately sensed that it must be the death of someone close to me.

His answer left me stunned, because although Stuart had confirmed to me a week earlier that he was still suffering from cancer and that the results of the medical examinations were not very encouraging, at no time had I thought of such a quick end for him. Close to me are several comrades -more or less my age- who are not in very good health, and the “normal” thing, at my age (soon ninety-three years old), is to think that it is you that time is counting down on.

So, in Stuart’s case, how can I think about it when he’s eighteen years younger? Besides, we were both in common projects and determined to continue participating in the fight against the world of power and exploitation.

For me, his death is not only the loss of a comrade, of a friend; it is the end of a collaboration of many years in common actions and initiatives to denounce the injustices of the world in which we live and to fight for a more just and free world. A world that is possible and for everyone, which we have not ceased to long for and to try to build through the consistent practice of active revolutionary and internationalist solidarity. END_OF_DOCUMENT_TOKEN_TO_BE_REPLACED

The PSNI (Police of Northern Ireland) and the Gardaí (Police of the Republic of Ireland) this week conducted a cross-border operation officially to combat the activities of the New IRA. PSNI officers made nine arrests in the North on 18 August under the Terrorism Act. The arrestees were seven men and two women, aged 26 to 50, including eight members of the Irish Socialist Republican Revolutionary Party, Saoradh. In the Republic of Ireland, the Garda also carried out a number of searches in support of the operation. These searches were carried out in Dublin, Laois, Cork and Kerry. Detectives from the PSNI Terrorism Investigation Unit obtained from the court an additional 72 hours of detention from 5 a.m. on Thursday, 20 August to interview those arrested and detained at the Musgrave Serious Crime Suite. A new operation finally took place on Friday 21 August: the PSNI searched four Saoradh premises in Belfast, Dungannon, Newry and Derry.

Note: Another man was arrested 22 August at Heathrow Airport in London in relationship to this case. The New Irish Republican Army is considered by the British security services to be the most dangerous armed Republican group and is thought to be responsible for numerous attempted attacks against police officers. 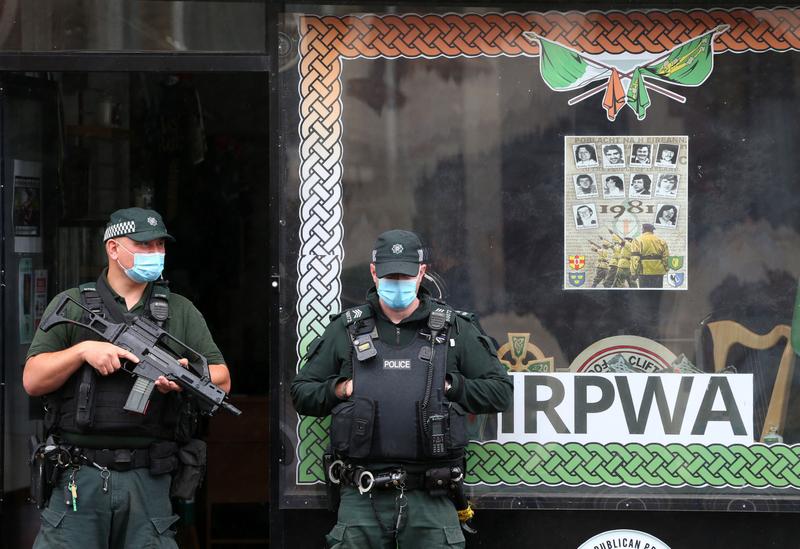 Search of Saoradh’s premises in Belfast

In the morning of 17th of August Terra Incognita gets TEMPORARILY evicted by the repressive forces of neoliberalism. Police forces intrude in the building and conduct researches for hours and confiscations. Days after the eviction the squat still remains open with cops celebrating TEMPORARILY their capability of violating every corner of our liberalized grounds.

For over 16 years Terra Incognita constituted a meeting place for hundreds of people of the struggling social basis. With constant events, direct acts, demonstrations and conflicts Terra Incognita was present in moments of the violent struggle against the violence of the state, the benefits of capitalistic monopolies, against the violating authority of fascism and patriarchy, against any type of discrimination and speciesism. In the grounds of the self-organised structures of self-education, solidarity and mutual aid of the squat all the “known-unknown” strugglers of freedom met and will continue to meet. Liberating and equality-based relationships were constructed, subversive plans and operations, dreams that day by day found and still find a space of moral and physical substance. For 16 years the squat proves itself to be the flesh of the flesh of the multiform struggle against any type of authority and oppression, without prioritizing or distinguishing the means that contribute to the spreading of libertarian ideas and the organization of social and class-conscious counter attack. Because for us this is liberation. END_OF_DOCUMENT_TOKEN_TO_BE_REPLACED

The witness explained about the violence experienced by the defendant during arrest and procedural errors committed by the police, such as the family being late in receiving an arrest warrant, searches, etc.

EN | Text by anarchist comrade Dinos Giagtzoglou: For the day of agitation and propaganda in solidarity with Monica Caballero and Francisco Solar

The NYC Anarchist Book Fair will be held virtually this year, with a few limited outdoor events. Our website will host presses, live digital conversations and workshops, prerecorded talks and roundtables, a film festival, and archival materials from previous events. Deadline for Sept 25-27 NYC ABF submissions is August 31.

(You can still submit your ideas after the deadline but we may not be able to accommodate on Sept 2020 event. If that happens we may contact you about future opportunities in our year long programming.)

When we construct parallel worlds (worlds guided by logics other than consumerism, accumulation, and hierarchy) we lay the groundwork for a viable anti-capitalist life, one free from police and prisons, hunger, propriety, money, and the systemic violence levelled against the physical, psychological, spiritual and communal health of all beings. END_OF_DOCUMENT_TOKEN_TO_BE_REPLACED

Welcome to the 37th edition of Bad News. This is your Angry Voices From Around The World for August, 2020.

In this episode you will hear contributions from:

1. A call for the International Week of Solidarity with Anarchist Prisoners (23.-30.8.2020)
2. Radio Fragmata (Athens):
* Updates from so-called Greece
3. Anarchist Assembly Valparaíso (Chile)
* Statement on the current imprisonment of two comrades
4. FrequenzA
* An interview about the Coordinating (prisoner support) group 18th of October in Chile.
5. A-Radio Berlin (Germany)
* A summary of the ongoing Mapuche hungerstrike in Chile

Other audios from A-Radio Berlin in English here.
.