Refugees demonstrating after the burning of Moria. “Azadi!” Freedom!

In the following report from Greece, anarchists describe the burning of the refugee camp, Moria, and the response countrywide, as well as the latest chapter in other struggles against state repression on a variety of fronts.

A report by Radio Fragmata.

Another month, another report on the situation here in Greece. There has been no pause in the repression of the state, nor any peace for the marginalized and excluded. Another historic squat has been evicted, the economic despair many already face is becoming generalized, society drifts towards the right at the guidance of state and corporate media, and the largest concentration camp housing migrants in all of Europe has been engulfed in flames, displacing thousands.

As in the rest of the world, each morning brings new concerns, new disasters, new forms of precarity. We share the following information in the pursuit of a relentless and borderless solidarity.

The refugee camp Moria on the island of Lesvos has burned down.

The state claims this was the result of demonstrations by desperate people inside the camp reacting to new measures the police had opportunistically declared in response to an inevitable and now unavoidable outbreak of COVID-19 inside the camp. Some 35 cases have been made public as of early September; considering the intense overcrowding of the camp, the number should be assumed to be much higher. Some wonder whether nearby fascists took the opportunity to set fires under the cover of the refugees’ protests. It is certain that some of the villagers wanted those fleeing the flames to burn alive, as they pushed those who tried to flee to the nearby village of Mytilene back towards the blaze. END_OF_DOCUMENT_TOKEN_TO_BE_REPLACED

[Video] : Flush the Anti Terrorist Law – Solidarity with the Philippines

International Solidarity Call from Italy : ‘Who Aspires to Freedom Cannot Be ‘Measured’

«From 2019 to today the Italian State has carried out many repressive operations and inflicted a series of restrictive measures on anarchist comrades, limiting their freedom of movement and forcing them to remain within the limits of their city or to move away from the city or region where they reside.

As recipients of these kind of minor measures, together we want to relaunch our solidarity with the more than 200 comrades involved in the various trials in Italy that are starting this September and that shall continue throughout the autumn.
In particular, the appeal trial of the Scripta Manent Operation will resume at the beginning of September: this trial involves 5 comrades who have been in prison for 4 years (two of them for 8 years) and which has resulted in 20+ years of sentence in the first grade. END_OF_DOCUMENT_TOKEN_TO_BE_REPLACED

Technological domination is a giant with feet of clay. All it takes is a little bit of determination and caution to make it wobble. On the night of August 31st we set fire to a mobile phone antenna in El Prat de Llobregat (Barcelona).
Solidarity and complicity with all those who walk with their heads held high, both inside and outside the prisons.
And long live anarchy!

On 11th September a maxi-trial will begin in Lecce against almost a hundred demonstrators accused of having opposed the realization of the TAP gas pipeline in various ways. A sort of spectacular event with big numbers set up mainly to impress and leave a sign of repression that can also be a warning to others in some way. Besides the place, a bunker courtroom, chosen for the trial, officially for reasons linked to anti-Covid regulations, unofficially to create an atmosphere suitable for the criminalization of the TAP opposition, the obstinate and law-dependent clerks of Order and the Economy do not have much in their hands. In fact, we have nothing to defend. On the contrary: this trial should be an accusation that rebounds against those who are devastating the earth in the name of a progress that has been revealing its rotten face for centuries. Infrastructures with a strong impact such as a gas pipeline are feeding an energy-consuming system that only produces devastation, control, repression. It’s enough to just take a look around. There is not one thing that is not connected and linked to everything else. That is why we can’t see the realization of a gas pipeline as that alone. On the contrary, this is an operation that is colonizing places and minds. It is the expression of an economic system that is pushing the planet to the brink, to the slavery and death of millions of individuals. END_OF_DOCUMENT_TOKEN_TO_BE_REPLACED

Claudio Lavazza has been transferred to Spain.
Here is his new address :

Flavia Digiannantonio
C.C di Roma Rebibbia, via Bartolo Longo 92,
00156 Roma, Italy
(at the moment she is in cell with Anna Beniamino)

We are midway through Black August and I’ve been doing lots of thinking, fasting, and trying to grow as a person and as a radical anarchist. Lots of fitness, reading, mentally taking stock.

This is my third Black August in SHU. I was thrown into segregation two years ago on August 17th and was kept within for a year pending prosecution; then, after they brought these new charges, we’ve done another year pretrial. It’s been a rough two years filled with restrictions, violence, abuse, but also love strength and friendship. Resistance is strong.

Last year’s Black August was spent partially at USP Lee, where I met Thomas Smith (aka Mad Dog) a blood leader and revolutionary who was also participating. He had been in SHU at that point for 18 months pending an ADX transfer. We fasted together, had long conversations on resistant strength and what it means to be a revolutionary today. I still think of Mad Dog often and encourage everyone to write and send reading material into him. END_OF_DOCUMENT_TOKEN_TO_BE_REPLACED 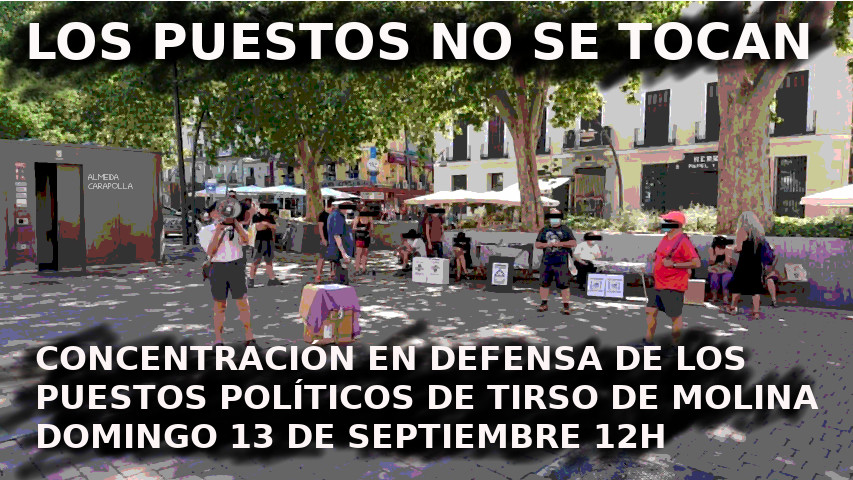 In fact, the only official justification we received from the agents was not having a license and the assertion that “El Rastro was closed by municipal order.” The reality is that El Rastro continues to be closed as of today since the stalls do not accept the City Council’s reform plans that seek to end the emblematic market as we know it and also know that for more than three decades political stands lack licenses. For this reason, we are convinced that the Pandemic is only an excuse to eliminate political positions that spread ideas and free culture, and it is clear that Tirso de Molina and El Rastro are also part of the gentrification plans that we have been suffering in the area in recent years. END_OF_DOCUMENT_TOKEN_TO_BE_REPLACED Jennifer Laude is fondly remembered by her friends and family fondly as a beautiful person who was confident in her identity and sexuality. However, Pemberton did not care for Jennifer Laude as a human being. He was unrepentant at his trial, even going so far to dehumanize Jennifer Laude by referring to her as “it.” END_OF_DOCUMENT_TOKEN_TO_BE_REPLACED

Since the first Industrial Revolution began in the 1700’s, successive industrial revolutions have profoundly affected labour, the workers themselves, creating even the concept of the ‘working class’, how they lived, their integration into the advancing urban hell holes, the prisons of the factories, mills and mining pits, even their children were not spared the indignity, even death of modern slavery of the time. Industrialization, the result of mechanisation in industry, fed modern enslavement and domestication of human beings in every corner of the spreading empires and colonies not just the rest of the living planet.

We are now on the cusp of the beginning of a 4th Industrial Revolution (4IR) and even a 5th (5IR) that will affect just as radically our imprisonment within the technological society as it did in the previous ones. The very concept of labour, even work itself will change beyond recognition once again. Already in the ensuing ‘coronavirus pandemic’ and curfew controls that have been enforced on billions worldwide, the signals of the coming industrial revolutions are already appearing, with millions being reported to lose their jobs in many countries. END_OF_DOCUMENT_TOKEN_TO_BE_REPLACED