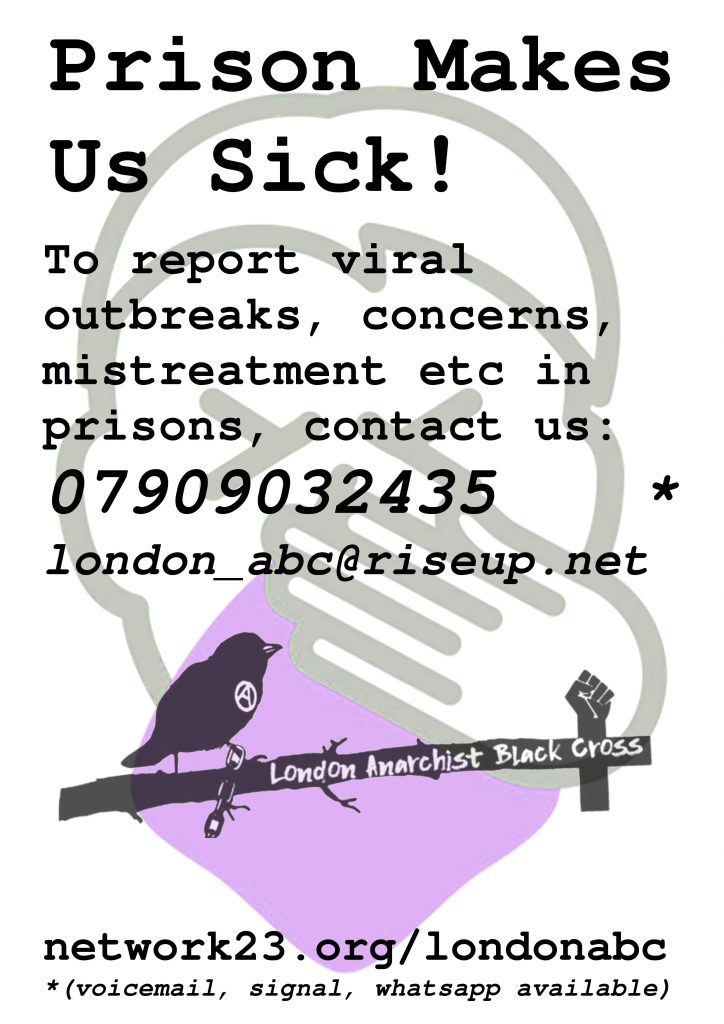 In this moment of not knowing what’s coming next, the failure of this system is more and more clear: a world wired for ever-growing speed, circulation, and productivity, suddenly has to stop. In this moment when power gets more power, fed by the general panic of an unknown and new situation, there’s a pressing need to listen out and to fight for those who are most affected, those who already know what it is to be trapped, isolated and repressed.

We will be publishing information, hoping to amplify unheard voices, and to break the silence that risks making an intolerable situation even worse. Now, more than ever, those caged by the state face precarious conditions, with low hygienic standards, very poor healthcare and overcrowded cells. While the ‘managers’ of the crisis carefully calculate how this or that measure can protect the political and economic order, the basic steps we need to take to slow down the contagion are clear: keep distance between each other, maintain good hygiene and avoid crowded places. Inside, this will be difficult or impossible for many. We are not going to ‘take this on the chin’! Prison makes us sick!

Take a minute to share this poster, as an easy and first step to practicing solidarity. Email us with any questions. We won’t share any details without consent.

‘Let’s go into the streets together, to send up our rebel signal to those held hostage in the entrails of Fortress Britain. Let’s go out into the night and make a dent, however brief, in the illusion of the authority of the courts, cells, judges, screws and cops who would separate and govern us, and pretend themselves our captors.’ Two anti-fascist prisoners currently serving a custodial sentence in relation to a fight with the South East Alliance in London during the summer of 2014. If you would like to write to either K or D, address envelopes to one of them and send to Freedom Bookshop. They will then be forwarded on to them. Remember to include a name and address on the card/letter for the prison to accept it.

We at London Anti-Fascists believe history has taught us that anti-fascist action is ALWAYS self-defense. It’s in that radical tradition of confronting fascist’s and their ideas that we organise to create a space for working class organisation in order to realise a world without hunger or fear.
Solidarity!

This is also in solidarity with comrades from Greece
Comrades coming from various geographies and different paths of
struggle, yet having the same longing for the diffusion of anarchist
offensive, support the call for a Black December 325 recently received an email from London ABC who are part of organizing a tour for a member of the Belarus ABC about repression in that country. London ABC asked us to publicize their meeting in Freedom Bookshop, but instead we publish the details of the entire tour. We’ve previously reported repression and resistance news from Belarus. You can find the reports in our Belarus section.

For more information about the prisoners and the ABC in Belarus: http://abc-belarus.org ‘Come show solidarity with our comrades in the cold dark months of december by attending London ABC’s letter and christmas card writing day at Freedom bookshop on Sunday the december the 9th. To send our solidarity to all imprisoned comrades showing them they are not forgotten’

A Prisoner Art Exhibition, collected and co-ordinated by Anarchist Black Cross (ABC) groups and allies, has now arrived at Colorama #2 (or C2), South London, as it begins a year-long tour visiting over a dozen venues across England, Wales and Ireland.

Opposite the old Colorama Cinema, C2 is fast becoming a hub of activity as residents transform the office block and ground level warehouse into an anarchist social centre, while hosting the start of the ABC art tour for approximately 10 days. It will then move onto Britain’s largest anarchist bookshop Freedom Press, in Whitechapel, before being displayed at the London Anarchist Bookfair in the University of London on October 27th.

Featuring 32 pieces from seven current and past prisoners, including well-known artist Lucy Edkins and Phil Africa from the MOVE family, the exhibition shows the artistic talent of those behind bars, as well as highlighting the political cases of the prisoners themselves. END_OF_DOCUMENT_TOKEN_TO_BE_REPLACED

A noise demo to show solidarity with prisoners at HMP Brixton, because frankly we don’t feel like celebrating 60 years of having a queen, especially a queen who takes pleasure from imprisoning our mates, comrades, and other fellow human beings. What kind of a sick mind takes pleasure from locking people up in prison? Prisons destroy people. They destroy familes, friendships, and communities too. Putting somebody in prison is an act of violence which contributes nothing real or positive and only brutalises those who are already struggling. END_OF_DOCUMENT_TOKEN_TO_BE_REPLACED