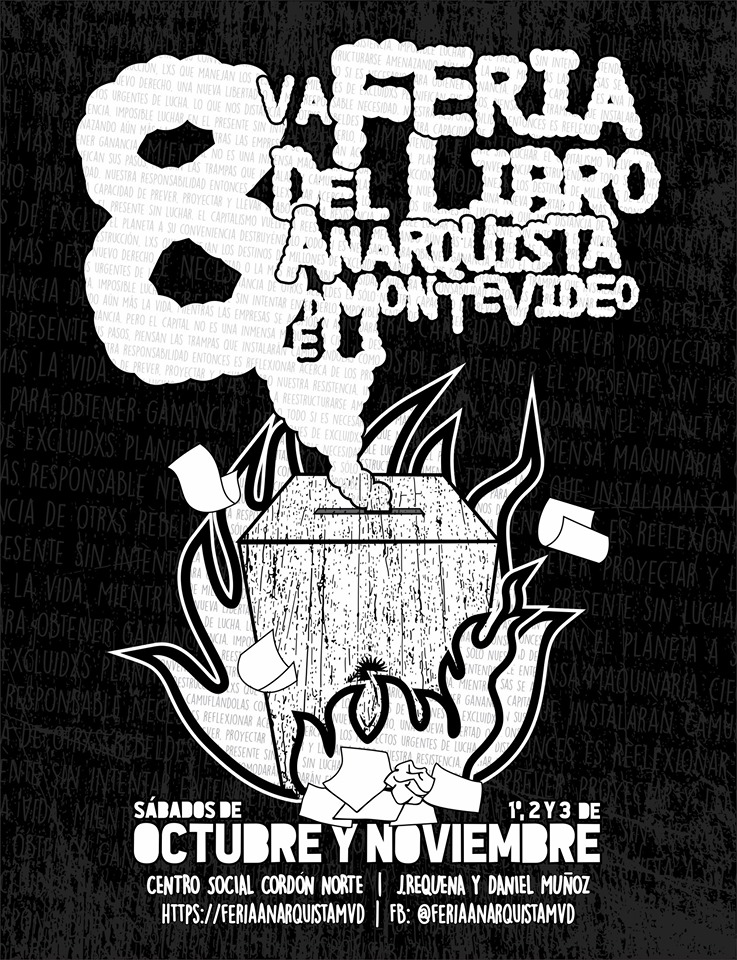 A-Radio Berlin had the chance to talk with some of the organizers of
this 12th BAB about the event, its trajectory and perspective for the
future, as well as the experiences of anarchist organizing in Serbia and the Balkans. END_OF_DOCUMENT_TOKEN_TO_BE_REPLACED

Anarchists are no strangers to conflict or violence. Yet we feel that the way the conflict unfolded at this year’s London Anarchist Bookfair was deeply disturbing and should have nothing to do with anarchism. The organising collective have, as a result of events on the day and subsequent reactions, issued a statement announcing that they will not be doing a Bookfair again next year. What we would like to talk about here though is the worrying climate in which the events took place, and the dangers of dogmas in the anarchist milieu.

The events at the Bookfair

Some individuals attending the Bookfair, one of whom was a Green Party politician, distributed provocative leaflets on the perceived ramifications of changes to the Gender Recognition Act. They were confronted by a group and expelled.

But it didn’t just end there. Having defended those who had distributed the leaflets, Helen Steel (‘HS’), a long-standing agitator and comrade to many, became the group’s next target. HS is known for having fought the infamous ‘McLibel’ trial for over a decade, and was subjected to intrusive state surveillance by an undercover police officer who deceived her into a two-year relationship. HS had not given out the leaflets (contrary to rumour), but had expressed support for those who had, and maintains some positions held by ‘TERFs’ (Trans Exclusionary Radical Feminists). The crowd demanded she leave. END_OF_DOCUMENT_TOKEN_TO_BE_REPLACED

This morning (October 25th) the civil police in Rio Grande de Sul executed several search warrants on residences and collective spaces in the metropolitan region of Porto Alegre (RS) to collect materials for investigation. Police allege that the addresses are linked to a group that would have carried out attacks on vehicles, political party headquarters, police stations, banks and car dealerships. The action was violent and the police assaulted the people who live in these spaces and took some of them to the police station.

There were a total of 10 search and seizure orders, where anarchist material (posters, books, banners, etc), fantasy masks, spray cans and other common objects, including plastic bottles filled with plastic bags were seized and reported as being molotov cocktails. Not even police officers are so ignorant as to think that once can make molotov cocktails with plastic bottles and without a flammable liquid. In fact these bottles were going to be used as ecological bricks for bio-construction. END_OF_DOCUMENT_TOKEN_TO_BE_REPLACED

Participation at the bookfair is open for all anti-authoritarian/anarchist groups, publishers, initiatives, places etc. (not just from the Balkans) so feel free to come and set up your stall or just visit the bookfair to participate in discussions. END_OF_DOCUMENT_TOKEN_TO_BE_REPLACED

The Eleventh Anarchist Bookfair in Zagreb will take place on April 10th to
April 12th, 2015.

Anarchist Bookfair in Zagreb (ASK – Anarhisticki sajam knjiga) is annual
anarchist event and first ten bookfairs went well, and we hope to bring in
more and more people every year as participants, publishers, groups,
projects – whoever is interested in what the bookfair has to offer.

For discussion part everything is open, as every year, so all suggestions,
ideas, etc are welcome, as well as texts that you find interesting for
further debate. END_OF_DOCUMENT_TOKEN_TO_BE_REPLACED

It is clear that nationalism is a tool used against the exploited classes. In the Balkans, (especially in the region of ex-Yugoslavia) the rise of nationalist ideology in the 1990’s helped enable the brutal capitalist attack against society. It further atomized the population and destroyed established networks of cooperation and solidarity.

The need to confront nationalist ideology from a radical and anti-authoritarian perspective gathered us in Mostar on the 5th and 6th of September 2014, for the 8th Balkan Anarchist Bookfair. We came from Bosnia and Herzegovina, Croatia, Serbia, Slovenia, Albania, Romania, Greece and other countries outside the Balkan area.

The true nature of nationalism is nowhere more obvious then in Mostar, a city divided in two, with the signs of wartime brutality still evident in the streets of the city. END_OF_DOCUMENT_TOKEN_TO_BE_REPLACED

Program of 8th Balkan Anarchist Bookfair: Over the Walls of Nationalism

Eighth Balkan Anarchist Bookfair will take place in Mostar on 5th and 6th of September 2014 as part of Anti-Fascist festival, annual Mostar event.

We invite all anarchist/antiauthoritarian groups, individuals, publishers, initiatives and projects from Balkan (and beyond) to come and participate at BAB in discussions and meetings which will help us build solidarity networks and strong anti-nationalist and anti-capitalist movement. Mostar in many ways represent misery that is imposed on big part of Balkan through divisions created by nationalism, war and fight for power between political elites which were and still are working on destruction of all social
networks in town that go beyond these artificial “differences”. All this fits perfect to capitalist logic of “divide and rule”, since it’s used as tool for prevention of all social revolts and attempts to build up social connections that were violently broken. END_OF_DOCUMENT_TOKEN_TO_BE_REPLACED

8th Balkan Anarchist Bookfair: Over the Walls of Nationalism (September 2014)

Eighth Balkan Anarchist Bookfair will take place in Mostar (Bosnia and Hercegovina) on 5th and 6th of September 2014 as part of Anti-fascist festival, annual Mostar event. We invite all anarchist/antiauthoritarian groups, individuals, publishers, initiatives and projects from Balkan (and beyond) to come and participate at BAB in discussions and meetings which will help us build solidarity networks and strong anti-nationalist and anti-capitalist movement. END_OF_DOCUMENT_TOKEN_TO_BE_REPLACED The assembly of the participants of the Balkan Anarchist Bookfair 2013 (that was taking place in Ljubljana/Slovenia 24 – 26 May 2013) decided to use the opportunity and make a political intervention in the city.

The Statement from the action:

WE ARE THEIR CRISIS — for a transnational struggle against capitalism and repression!

We, the participants of the Balkan Anarchist Bookfair in Ljubljana, are taking to the streets today in order to express our common rejection of capitalism and repression. We are an international community of anarchists and anti-authoritarians, engaged in struggles against the regime of capitalist exploitation, austerity measures, the rise of nationalism and fascism and state repression. END_OF_DOCUMENT_TOKEN_TO_BE_REPLACED