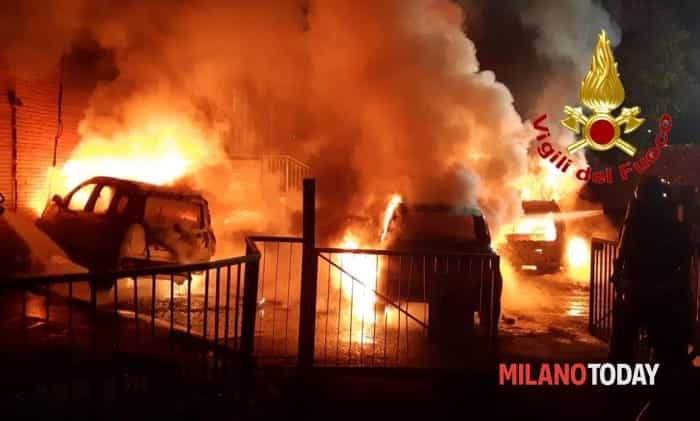 On the night of November 6, 2019, we burned 5 cars of MM [Metropolitane Milanesi] in Forze Armate street in Milan because MM is one of those responsible for the evictions of houses.

Note: Metropolitane Milanesi, the company that manages underground transport in Milan, since some years is managing a part of the residential popular housing in Milan; while the remaining part is managed by Aler. Barona is a neighborhood in Milan; the repressive fact referred to in the text happened on October 30, when some members of the Comitato Autonomo Abitanti Barona (“Autonomous Committee of Barona Inhabitants”, an antagonistic group related to the struggle for the house in the neighborhood) received some “divieti di dimora” (bans) from Milan.

On November 12, 2019, Amma, Uzzo and Patrick were transferred from the “Le Vallette” prison (in Turin) to house arrest, with no other special restrictions. They had been arrested on September 20, 2019, in the context of a repressive operation aimed at carrying out some precautionary measures (in particular, in addition to their arrests, about a dozen “divieti di dimora” from Turin – a measure that requires the accused not to reside in a particular place and not to access it without the authorization of the proceeding judge) and some searches, referring to a investigation by the prosecutor’s office of Turin over charges relating to the conflictual demonstration of February 9, this year in Turin, against the eviction of Asilo Occupato and the repressive operation “Scintilla” (February 7), for which currently only Silvia is imprisoned (since a few months under house arrest with all the restrictions). On September 20, to arrest a comrade the police had surrounded the Casa Brancaleone occupation (in Milan, also the home of anarchist space L’Accerchiata), threatening to evict the squat – an attempt that not happened because the comrade was arrested.

We recall that on October 8, Amma, returning to prison following a judicial hearing concerning the arrest, was beaten and threatened by some prison police officers; a serious physical consequence of this beating was the perforation and damage of an eardrum.

We also recall what happened on February 9: a demonstration in response to the “Scintilla” operation moved through the streets of Turin, trying also to approach the Asilo (completely surrounded by police and carabinieri, and in the meantime devastated by the police and the workers in charge of closing the building), subsequently going against the police, the city and things that are daily the frame of the existence of the oppressed. During the demonstration some people were arrested and detained in “Le Vallette” prison – and then released a few days later.

Those arrested and under investigation on September 20 are accused of “aggravated injuries”, “resistance to a public official”, “damage” and “dirtying”.

We learn that on Wednesday September 25th, 2019, following the acceptance of the request for house arrest, Silvia was transferred from the “Le Vallette” prison in Turin to house arrest, with all restrictions. The comrade is the last anarchist to be imprisoned for the “Scintilla” operation of February 7th this year, which involved the arrest of five other people, the eviction of Asilo Occupato in Turin (anarchist squatted building existing since 1995) and some house searches.

The main accusation, according to the documents of the Turin prosecutor’s office, was that of having constituted or participated in a “subversive association” (article 270 of the Italian penal code) and of having carried out some direct actions concerning the fight against the CIE and the CPRs, prisons for migrant people. END_OF_DOCUMENT_TOKEN_TO_BE_REPLACED

Niccolò Blasi, anarchist arrested 7.02.2019 in the context of the repressive “Scintilla” operation – which involved the eviction of the Asilo Occupato in Turin and the arrest of six people (two of whom were subsequently released from prison following the fall of the “subversive association” accusation) -, was again transferred, this time from the prison of Ivrea to that of Cuneo. Below is the address:

While the others arrested on 7.02.2019 still in detention are always in the prisons of Ferrara and Rome Rebibbia. Here are the addresses: END_OF_DOCUMENT_TOKEN_TO_BE_REPLACED

About the repression against anarchists in Italy

ABOUT THE REPRESSION AGAINST ANARCHISTS IN ITALY

Unfortunately, Italy has a long history of repressive operations against anarchists. Since Operation Marini in 90s, the waves of repression against comrades, which brought into jail many people with charges of terrorism or criminal association, were countless. Just to name a few of the biggest repressive operations: Cervantes, Croce Nera, Ardire, Mangiafuoco, Thor, Ixodidae, Nottetempo, Fuoriluogo…

These operations usually lead to several house raids in all Italy and to the arrest of several comrades who spend 1 or 2 years in pre-trial detention. Then they face trials with charges of ‘association’ and usually they are also accused of several direct actions for which the inquisitors never found any responsible. Sometimes the public engagement of these comrades in the anarchist struggle and their open expression of anarchist ideas (direct actions support, prisoners solidarity, running an anarchist magazine or website and so on) is the only evidence that the prosecutors bring into the court. For this reason, in the majority of the cases all the accused are later acquitted at the trial, but only after having spent many months or years in prison.

Besides these huge operations, there is a constant small-scale repression against local anarchist groups which are especially active on the territory, for example with struggles against police repression, evictions, detention centres for migrants, jails, gentrification, corporate interests… In these cases anarchists are constantly repressed with recurring trials and spend much of their time going in and out of prison, house arrest or other restrictions of their freedom. This kind of police strategy of trying to burn out comrades with the aim of destroying the local anarchist group happens in many cities but since many years has been especially strong in Torino. END_OF_DOCUMENT_TOKEN_TO_BE_REPLACED

Update: Solidarity with the imprisoned comrades in Turin (Italy)

Here is the address:

Silvia Ruggeri and Giada Volpacchio continue to receive mail via the following address:

In moments like these, we stand together. Regardless of whether the comrades are «guilty» or «innocent». The state will always persecute those who want to overthrow it. So let’s take good care of each other and don’t leave the prisoners alone!

In closing, we would like to quote a part of the accusations that led to the arrest of the comrades in Turin:

“In order to establish contacts within CPR [Immigration and Repatriation Centre], they threw tennis balls with a multilingual brochure and a mobile phone number with which they agreed simultaneous actions within and outside the CPR structure. Then they put matches and everything needed to start a revolt and setting fire in packages of biscuits and other goods.”

May the revolt spread.

Call for Solidarity with the Imprisoned of Operazione Scintilla, Italy

This is a translation of an original article in German, with pictures.

On Thursday 7 February 2019, at 4:40 a.m., the eviction of the squat “Asilo occupato” (“the occupied kindergarden”) in Via Alessandria 12 in Turin, occupied since 1995, began. The eviction was carried out as part of the “Operazione Scintilla” (“Operation Spark”). Several hundred
Carabinieri in riot gear, police officers and Guardia di finanza with machine guns and plain clothes police not only evicted the house, but also arrested six anarchists. A seventh person is still being searched for.

The charges are serious: formation of a subversive association, incitement to crime and the possession, manufacture and transportation of explosives in a public place. The charges are related to the resistance against the Italian migration regime, namely against the deportation camps/prisons CPR and CIE (Centro per l’Immigrazione e il Rimpatrio = Immigration and Repatriation Centre; Centro di identificazione ed espulsione = Identification and Deportation Centre), more information below. END_OF_DOCUMENT_TOKEN_TO_BE_REPLACED