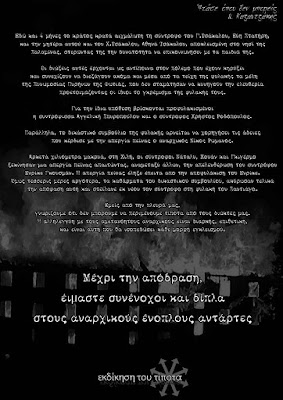 On April 20th, in the special court-martial of Koridallos women’s prisons where one more trial session of the second ‘Halandri case’ took place, Michalis Nikolopoulos read his request for postponement of the trial and then another statement by Christos Tsakalos and Damiano Bolano (both comrades were absent from court due to their hunger strike). Later, the defense attorney Frangiskos Ragousis handed the judges a letter from Athena Tsakalou, the mother of Christos and Gerasimos Tsakalos. She herself was present in the courtroom but she refused to testify. The letter wasn’t read in court, and the presiding judge simply announced that ‘it will be added to the transcript.’ The complete letter is as follows:

‘Every act of rebellion expresses nostalgia for innocence and an appeal to the essence of being.’
[Albert Camus]

I am asking myself: why are parents of the anarchists–revolutionaries of the Conspiracy of Cells of Fire being subpoenaed to trial? Why are they subpoenaing me? Are they doing it in order to ask me if I know something about the organization? To ask me questions about the personal lives of my sons, sketch out their ‘psychological profile,’ or get an opinion on their ‘family life’? Or to ask me if I agree with the actions of my children and, in general, those of the organization? To stand me up in front of this court, supported by that little book, and make me swear to that god you have placed in the service of Power? To make revolutionary anarchists feel uncomfortable while their parents are asked a bunch of awkward questions? Or is it so that you yourselves can rejoice at the thought that you have made us believe it is we who must give the answers and make an apologia? END_OF_DOCUMENT_TOKEN_TO_BE_REPLACED