International Anarchist Solidarity with Antifascist prisoner Jock Palfreeman from the Solidarity Action Group of Indonesia and Australia. Comrade Jock recently completed a 33 day hunger strike in protest against the conditions of his imprisonment and ongoing harassment from prison authorities for his work with the Bulgarian Prisoners’ Association. Jock is serving a 20 year prison sentence for defending 2 Roma boys and himself from a racist mob. Free Jock! Long live the Bulgarian Prisoners’ Association.
END_OF_DOCUMENT_TOKEN_TO_BE_REPLACED

Kunin Law: Crow and Country – A Letter To All First Nations (Australia)

“an independently produced film bringing the voices of the contemporary Adnyamathanha, Gurindji, Tanganekald, Yankunytjatjara Anangu, Mirning, Narunnga Aboriginal Australian people forward who are united in their stand AGAINST the present and planned uranium mining and nuclear dump activities in South Australia. Bruce Hammond, an Aboriginal Tanganekald man with ties to the coast in the lower South East of South Australia and the central desert regions of Finke and Alice Springs in conjunction with Alexander Hayes & Magali McDuffie from Ngikalikarra Media brought the ‘Protecting Country’ documentary film on a screening road trip across Australia.”

19.11.17: Tonight, a group of people in Naarm / Melbourne, responding to the call out for 8 Days of Solidarity for Refugees, undertook an action targeting Serco. Serco is a multinational corporation which is directly responsible for the inhumane incarceration conditions faced by refugees, asylum seekers, and detainees, in so-called Australia. Serco is also a major player in the international privatised prison complex.

Wilson Storage and Wilson Parking benefit from the suffering caused by Wilson Security on Manus, Nauru and elsewhere. In the past week we attacked both subsidiaries with glue, concrete, paint and hammers. We will continue to attack Wilson Group until they pull out of detention wholly and permanently. Any company associated with the border industrial complex is a target. We urge our comrades to join us in solidarity with protesters on Nauru and all others incarcerated.

On the night of Sunday 26th June we glued the locks and spray painted the entrance to Wilson Security on Sydney Road, Coburg in Melbourne.

Wilson provides security at Nauru and Manus Island detention centres and are responsible for numerous, well documented abuses of detainees.

Solidarity with the protestors at Nauru detention centre!

Sabotage of political offices in solidarity to detained migrants (Australia)

On the 2nd July, the day of the federal election in so-called Australia, we glued locks, graffitted and broke the windows of Liberal and Labour MP offices across Narrm/so-called Melbourne.
We did this in solidarity with those on Manus Island, Nauru and in detention centres everywhere. End the border & prison industrial complex. End white supremacy.

In the final hours of December 2015 we attacked the offices of the
defense contractor BAE Systems on River Boulevard in Richmond with paint
and sledge hammers.

BAE Systems make billions from war and their technology is responsible
for countless civilian deaths worldwide.

This action was carried out as part of Black December, a month of
anarchist direct action that was initiated by the anarchist prisoners
Nikos Romanos and Panagiotis Argirou in Greece. 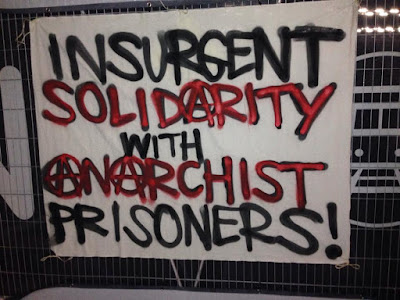 Melbourne, Australia: In the early hours of Sunday, August 30th we attached a banner to a fence outside the Richmond railway station in inner-city Melbourne as a minimum expression of our participation in this year’s International Week of Solidarity with Anarchist Prisoners.

INSURGENT SOLIDARITY WITH ANARCHIST PRISONERS!
FIRE TO THE PRISONS AND THE SOCIETY THAT KEEPS BUILDING THEM!

For the Media and Public Opinion

JAZIRA, Rojava (July 1, 2015) – Through history, with any identity that it might be, humanity has assembled around definitions such as freedom, equality and peace – and it always has risen in defiance of tyranny, oppression and cruelty. Freedom-lovers throughout the entire world have continuously been involved in a struggle to leave a free and peaceful future for their children.

The Kurdish people has played a big role in this revered struggle of peoples, as they continue to conduct their significant part. For thousands of years the pressure and war of deadly powers has not been reduced, yet our relentless people have always stood strong in face of those dark forces and have held high the flag of struggle. In order to grant freedom and democracy, whatever price it has been required, these people have paid confidently. This struggle of Kurdish people can be taken into account as the hardest and longest struggle of human history. Today, a streamer of this respected battle is waved by proud combatants of the People’s Defense Units and the Women’s Defense Units in Rojava Kurdistan, Syria.

This valued fight of our forces today has echoed widely throughout the entire world, and has been of abundant hope and belief for freedom-loving young men and women. For that, willing individuals from all around the world step forward to come to Rojava and be a part of this shared struggle of peoples. This assembly and reaching each other, defines well that humanity still lives with the same principles and purity. How hard determined unrighteous ones try, warriors who march taking those principles as value, are more resolute to let not the enemy forces a single opportunity. END_OF_DOCUMENT_TOKEN_TO_BE_REPLACED