“From Baghdad to Beirut, we shall continue. No Sunni, no Shia…” – Internationalist text from the Middle East

بەکوردى بۆ بڵاو کردنەوە [ku]
“From Baghdad to Beirut, we shall continue. No Sunni, no Shia…” [ar]

The Iraqi government is made up of all bourgeois factions in Iraq, and it is accepted by regional forces and the world bourgeoisie, but the proletariat tried to bring it down…

The “Green Zone” in Baghdad is a centre of the world’s capitalism; the proletariat tried to occupy it and lost a lot of lives for it…

The port of Basra is a global corridor for oil exports and international trade and the proletariat blocked it, and tried to control it.

The Iraqi police, security forces, special forces and military forces are forces of global capitalism (with the participation of Shia, Sunni, Christian, Kurdish, and Turkmen bourgeoisie, with a large numbers of regional and international forces, including troops of America and Europe, Turkey, Iran, etc.), but the proletariat attacked them, their centres and detachments in the streets, and as many as 650 proletarians have been killed by them and more than 20 thousand wounded (this is not to mention the number of abducted and imprisoned…).

The proletariat in all rebellious areas of Iraq burned down the headquarters of the political parties (religious and national without exception), they burned down the houses of members of parliament and State officials and they also attacked security and police stations, media, judicial institutions and the Ministry of Justice, newspapers and television stations… By doing this, the proletariat attacked the whole State.

According to the prime minister Adel Abd al-Mahdi, this movement destroyed the national economy (capitalism) in all its aspects. The proletariat in its struggle attacked without exception everything, any symbol, any person, any base attached to the history of the authority and repression including military, diplomatic institutions, trade centres and secret services, internal as well as external. All the attacks on the repressive forces of Pasdaran in the city of Karbala are not really anti-Iranian as the media said, but it is a part of the class action against the repressive forces and centres in all their forms just like the attack on the Green Zone and the other places. END_OF_DOCUMENT_TOKEN_TO_BE_REPLACED

Towards an International Meeting in Kurdistan

In front of the expansion of the Middle-East War and the new Iran-Iraq revolutionary waves: Towards an International Meeting in Kurdistan

In the last decades, the capitalist society as a whole is splitting up more and more into two great hostile armies directly facing each other: Bourgeoisie and Proletariat. Our epoch, the epoch of the deepening of the global industrial and commercial crisis and thereby increasing class struggle around the world has already passed various stages of development, through which the proletariat has exceeded its first stage of the isolated and sporadic phenomena. The growth of the class war will more and more take on an increasingly international form. And despite of the capitalist war in the Middle East, and new attempts by global capitalism to widen the circle of the war under the pretext of striking Iran’s nuclear weapons, proletariat in Iran has joined-up the current international wave of class struggle. The strikes and demonstrations in Iran have spread to over 249 cities in all of Iran’s 31 provinces. These revolutionary waves did not set an end in Iran, before the proletariat in Iraq entered this historical wrestling ring.

​In July 2018, a new wave of the class struggle in Iraq, with 30 victims killed and 700 injured during the past 10 days, more than 50 police and security men were wounded – proletariat in Iraq too started moving towards the universal scene of the class struggle. During the same week, demonstrations erupted in all towns and cities in central and south Iraq, where dozens of demonstrators were wounded, and hundreds arrested. END_OF_DOCUMENT_TOKEN_TO_BE_REPLACED 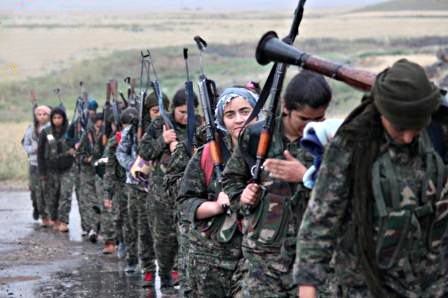 On the 10th of June 2014, Daesh terrorists could occupy the city of Mosul in Iraq and seize large numbers of weapons and military equipment, adding to their military supplies that already were controlled in Syria from the Syrian Regime and the Free Syrian Army. While taking control of some of Syria and Iraq’s oil and gas fields, the terrorist group tried to enlarge its controlled territory from North of Aleppo up to Hasakah outskirts, north of Mosul to Takrit and up near Baghdad. END_OF_DOCUMENT_TOKEN_TO_BE_REPLACED