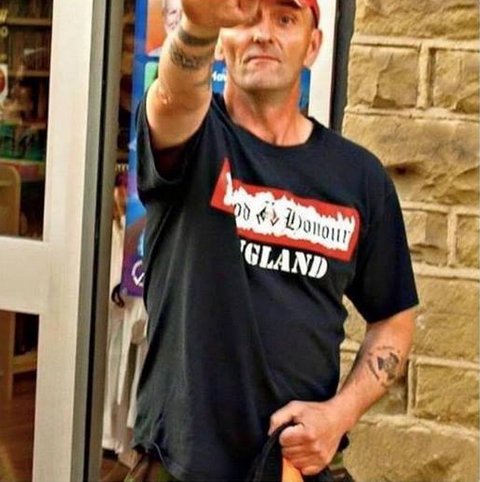 On Thursday 16 June Labour MP Jo Cox was shot and stabbed to death by the fascist nationalist Thomas Mair in Birstall, West Yorkshire. Mair shouted nationalist slogans, apparently “Britain First”, during the assassination. We publish this article and the photo above, in contrast to the corporate media who have overwhelmingly played down Mair’s Neo-Nazi links, instead presenting him in the typical ‘Lone Wolf’ garb suitable for covering up the extensive growth of a dangerous right-wing that has been nurtured by the daily press.

Thomas Mair is portrayed by the right-wing tabloids as being ‘mentally ill’ – a label usually reserved for those perpetrators of a political assassination if they are white. But Mair’s far-right, neo-Nazi links not only span decades but countries: a network of hate and racism that knows no bounds. The network, both formally and informally, links fascist organisations and tendencies globally. In Mair’s case, his links extend to organisations that span at least three continents. Mair is charged with the murder of Jo Cox MP, who was a lifelong campaigner of human rights and spearheaded many humanitarian causes. She was just the sort of person Mair and his fascist associates detested. Some may believe his alleged vile act was not premeditated, but his history proves otherwise. That Mair allegedly chose to carry out the act in the lead up to the EU Referendum speaks volumes. Below is a mapping of the trail of hate that provides the topographical context to Mair’s beliefs and motivations. Moreover, what this trail shows is that Mair and his hate-filed colleagues were the subject of surveillance by an MI5 (and FBI) informer as far back as 2000.

Read the full story on undercoverinfo.