“ITS, or the rhetoric of decay” (Joint statement of insurrectional groups in Mexican territory)

From the website La Rebellion de las Palabras, critique of the excremental choir calling themselves “Eco-Extremist Mafia” – aiming at the eco-fascist and nihilist-right groupscule Individualists Tending toward the Wild (ITS), written by anarchist-insurrectionalist groups, CCF-Mexico, anonymous others in the territory of the Mexican State:

“The Tiger, in its unconquered gait, accumulates the memory and the traces of the road travelled, to stubbornly reaffirm it; unrestricted freedom that does not assure food but which a priori omits any possibility of degenerating into a herd or of assenting to grazing. Indomitable and irreducible, it confronts the most tenacious enemies. To do this it wields its instincts, taking advantage of its portentous night vision, its prodigious smell and its finely tuned ear. In its right attack: it disfigures, tears, kills and dies, to be reborn indomitable and fierce. Nothing escapes this becoming and it is exposed to the most daring hunters and the most tenacious tamers, veterinarians and circuses, taverns and altars, customs and laws, systems of thought and political institutions. Everything is shaken, torn or eliminated in this movement of which only the imagination can disern a principle but of which nothing and no one is able to decipher its objectives and its end. (…) Anarchism, conceived not as an inescapable realization but as a permanent tension embodied in an open configuration of thought and action, is also a tiger, indomitable and fierce, affected from end to end by this capricious walk into freedom.” – Gustavo Rodríguez

“Everything that we can identify as negative elements within our “space “, is also the responsibility of each of us to contribute to eliminate them. Bureaucracy, hegemony, informal hierarchies, intrigues, false friendships and false ‘comrades’ stabbing our backs have existed since the dawn of the so-called anarchist movement, because they are an intrinsic part of the human factor and our contradictions that constantly arise and are in conflict with each other. All these pathologies are due to attitudes that do not properly belong to a particular anarchist tendency but are present in all, and as long as they are not treated for what they really are, we will find them in front of us again and again.” – Conspiracy of Cells of Fire / Metropolitan Violence Cell

To the comrades in the Mexican region and the world, to the incendiaries and refractories of the planet, to the internationalists committed to a new coordination of anarchic informality:

Exactly 5 years and seven months ago we signed a “joint statement” at the request of a comrade for whom we feel great affection and respect. That text was entitled “2nd Joint Statement of the Anarchist Insurrectional and Eco-Anarchist Groups”. It was an unquestionably necessary writing given the context in which it was written and so we clarified it from the first lines: END_OF_DOCUMENT_TOKEN_TO_BE_REPLACED

“Sacco and Vanzetti: A journey through time” – Text by Members of CCF for Bibloteca Kaos during the International Week of Solidarity for Anarchist Prisoners (Brazil)

Here is a text that several imprisoned members of the Conspiracy of Cells of Fire in Athens, Greece, wrote for an event at the squatted anarchist centre Bibloteca Kaos in Brazil.

To all comrades, to all our anarchist brothers and sisters who are present in this event organized by the anarchist library Kaos. Let our thoughts break out and travel to Brazil so as to send these few words with the hope that maybe a little, you can feel our presence beside you.

In response to the subject of the event taking place during the International Week of Solidarity to Anarchist Prisoners and on the case of Nicola Sacco and Bartholemeo Vanzetti we would like to throw in our personal and historical contribution. The Conspiracy of Cells of Fire was from the very beginning an anarchist group of direct action that aspired to an upsurge of the anarchist aggressive presence in Greece. Thus, the CCF did not hesitate to often criticize that which was believed to be preventing the generalization of this intensification. But when the oppression finally made it to our doorstep, we fully understood that we would not own up to our standards should we refuse to defend our identity, our political viewpoints and our very substance. Furthermore we could have ended up being in complete contrast with our critiques against others in the past. So seven years after the day that repression struck us, we remain at the forefront of anarchist dignity, at least so as we perceive it. We refused to dishonor ourselves in any way and defended what we believed we had to defend, still paying the price of our uncompromising attitude. END_OF_DOCUMENT_TOKEN_TO_BE_REPLACED

The text comprises a proposal for continued informal coordination and includes an analysis of the Black December experiment, in printable Dark Nights format. The text just missed our deadline for April’s version and so gets an issue all to itself… print & distribute…

A Theoretical Contribution In Proposal for an Informal Anarchist Platform

1) Disobedience is a virtue

“You are obliged to pretend to respect people and institutions that you consider irrational. You live by fashion in a cowardly era, attached to ethical and social conventions you despise, that you condemn and you know they lack of any background. It is this constant contradiction between your ideas and desires and all the dead formalities and conceited spearheads of a culture that makes you sad, disoriented and unbalanced. In this unbearable struggle you lose every dance for life, all sense of your personality as every moment they oppress, they limit and control the freedom of your strength. This is a poisonous and deadly blow caused by the civilized world.”

We have long since opposed the world of authority and its countless projections and impositions on our lives. We have toed the line with the world of anarchy seeking to find accomplices in the “crime” of anarchist insurrection as a living stance towards the barbarism of modern times.

So far we have attempted to realize smaller and bigger mutinies, always on the principles of self-organization, anti-hierarchy and horizontal structures. Seeking through collective processes to achieve our personal self-education in order to acquire experiences, becoming familiar with anarchist procedures while making our “possessions” more and more forms of struggle, we came to meet each other based on common objectives and aspirations so as to continue wandering on the paths of anarchist action, walked or not up to now. END_OF_DOCUMENT_TOKEN_TO_BE_REPLACED

Dark Nights #45 : ‘Without a Trace of Remorse’ by Aggeliki Spyropoulou & ‘April’s Dream’ by Eat (ACN)

Bringing together two escape attempts, a dream, letters, claims of responsibility, interventions and the perpetual destruction of the existent…

1. ‘Without a Trace of Remorse’ by Aggeliki Spyropoulou.
2. ‘April’s Dream’ by Eat.
3. Coverage of the CCF Escape Case Trial.
4. ‘The perpetual move towards freedom…’ by Christos Tsakalos, CCF / FAI-FRI.
5. Message from CCF / Metropolitan Violence Cell to Las Lecheros Library, Chile.
6. CCF – FAI/IRF: The Free Besieged.
7. Open letter of Pola Roupa about the attempt to break Nikos Maziotis and members of CCF out of Korydallos prison.
8. Intervention of Christos Tsakalos at an event in the self managed hangout in Karditsa.
9. Direct Action Chronology 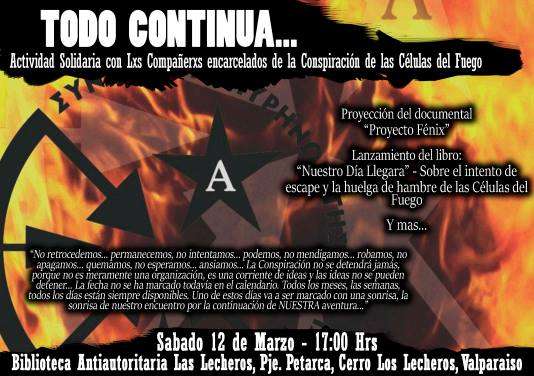