Yogyakarta – Indonesia : We claim the burning of a luxury car in front of the Sinar Mas office last night on Ring Road Utara Yogyakarta. And it’s not just solidarity for combatants on the streets against the Omnibus Law. But because we understand that the Sinar Mas Group is responsible for the destruction of rainforests in Indonesia to be converted into the palm oil industry.

“We want the world and we want it on fire”.

“We want the world and we want it on fire”.

Statement by Alfredo Cospito read in the courtroom on September 9, 2020 for the appeal of the Scripta Manent trial

I would have liked to be silent and let only my lawyer speak (who is more than capable), but seeing that my ideas have been torn to shreds and that words that I have never said have also been put in my mouth, I am forced to intervene directly in the first person.
For us anarchists the end does not justify the means, we firmly believe in the ethics of the means we use, for us it is the means that justify the end, not the other way around.

That is why I must reiterate that I have never made an apology for massacres or mass murder (as stated by – the prosecutor – Sparagna in a previous hearing). The prosecutor is confused, deliberately confusing “terrorism” with “massacre.”

Two ugly words (without a doubt): one belongs to me, “terrorism”, the other is totally foreign to me, “massacre.”

(I open a brief parenthesis on “terrorism”)

Sparagna, in order to create the monster (“the bloodthirsty anarchist,” myself, so we can understand each other), has fished in the context of many of my writings, extrapolating phrases at random. Phrases that are the result of a diatribe (from one of the many debates) that our movement is going through, “the legitimacy of the use or not of the term ‘terrorism’ in an anarchist sphere.” For those who are not anarchists, it is difficult to understand the passion with which we anarchists collide on certain issues. END_OF_DOCUMENT_TOKEN_TO_BE_REPLACED

On the night of October 21st [2019], a SUV car with a diplomatic plaque was burned, on rue Dumont d’Urville, behind the Greek embassy in Paris.

With this small action, we want to send a sign of solidarity to the anarchists in Greece, who fight against the State and Capital (legal and illegal) and to defend the occupied spaces.

A thought also to the anarchists imprisoned there, in particular the two comrades imprisoned for a robbery in Thessaloniki or the members of the CCF [Conspiracy of Cells of Fire] still in jail.
Freedom for all!
Solidarity is the attack.

On Wednesday, 24.07, anarchist comrades Christos and Gerasimos Tsakalos, members of the Conspiracy of Cells of Fire were released. The comrades were originally convicted with sentences of over 70 years, which were reduced to 20. The comrades made use of the Paraskevopoulos law that was introduced by the previous SYRIZA-led government and were released after having served 8 years of their 20 year sentences.

After their arrests they claimed full responsibility for their actions and proclaimed themselves “proud members of the Conspiracy of Cells of Fire”. During their imprisonment in Korydallos prison, the CCF claimed responsibility for Phoenix Project actions, including the bombing of the Prison Director’s car as well as sending a parcel bomb to the former head of the anti-terrorism unit, Dimitris Chorianopoulos.

Until the last prison has been destroyed!

Subversive anarchy past and present

“Revolution is aimed at new arrangements; insurrection leads us no longer to let ourselves be arranged, but to arrange ourselves, and set no glittering hopes on ‘institutions’.”
– Max Stirner

Don’t walk ahead of me… I’ll not follow you…

Carve your own path… Become yourself…”
– Conspiracy of Cells of Fire,
Imprisoned Members Cell

“I know that there will be an end to this fight between the formidable arsenal of the State and me. I know that I will be vanquished, I will be the weaker, but I hope I can make you pay dearly for the victory.”
– Octave Garnier

On this date over 100 years ago, 21st of April 1913, Illegalist and Individualist anarchist Raymond Callemin was executed by guillotine by order of the French state.
On the anniversary of his execution I write this in memory of all those that have fallen or been jailed in the social war against society.

The illegalist current is an offshoot of individualist anarchism. Refusing to be exploited, forced to work for some rich tyrant, instead the illegalist chooses to rob them. It’s an anti-work ethic for individual autonomy to be realised in real life right away through Individual expropriation also known as individual reclamation. END_OF_DOCUMENT_TOKEN_TO_BE_REPLACED

Panagiotis Argyrou was arrested on November 1st, 2010, following over a year of living in illegality during a campaign by the Conspiracy of Cells of Fire to send parcel bombs to European leaders, offices of European institutions and embassies of foreign countries.

He immediately claimed full political responsibility for his involvement in the Conspiracy of Cells of Fire and remained in prison for 8 years and 5 months with several convictions against him that reached a total of 220 years before the second instance (initial sentences: Halandri Case 37 years, Bombs Case 10 years, Phoenix Project Case 21 years, case involving all actions by Conspiracy of Cells of Fire 23 years, Escape Plan Case 115 years, City Bus Arson Case seven years). After serving 1/2 and 1/3 of his merged sentence (25 years under the sentence cap), the comrade was released on the 8th of April, 2019.

Until the last prison has been destroyed!

We support the imprisoned fighters morally, materially and politically…

(via Athens Indymedia, translated into English for Mpalothia by Anarchists Worldwide)

On Sunday the 11th of November, today’s greatest slaughterers commemorated the first world war’s butchery (and they prepared for future carnage). We continue to carry the old slogan of the anarchists from that era: against their war, against their peace, for the social revolution.

On the night of Monday, November 12th to Tuesday, November 13th, in this militarized capital and under video surveillance, we torched a car of the diplomatic corps at the intersection of Rue Spontini and Foch Avenue, as well as the big bourgeois Porsche that was parked next to it (yes, it is possible to bring war to the rich and the powerful!).

For the comrade Mikhail Zhlobitsky: we want to remember him this way, not with words, but with flames. Solidarity with Russian anarchists who respond to repression with direct action. Solidarity also to the anarchists who face the judiciary in Greece (CCF), in Italy (Operations Scripta Manent and Panico) and everywhere else. A thought for Krème and S., imprisoned in Limoges.

Solidarity flyposter for Aggeliki Spyropoulou, imprisoned anarchist comrade in the CCF Escape case. The comrade was sentenced to 28 years in prison for her involvement in the 2015 escape attempt to blow up part of Korydallos Prison and free the imprisoned members of the Conspiracy of Cells of Fire.

From the US Prison Strike to the Greek Prison Struggle: An Interview with Imprisoned Anarchist Christos Tsakalos 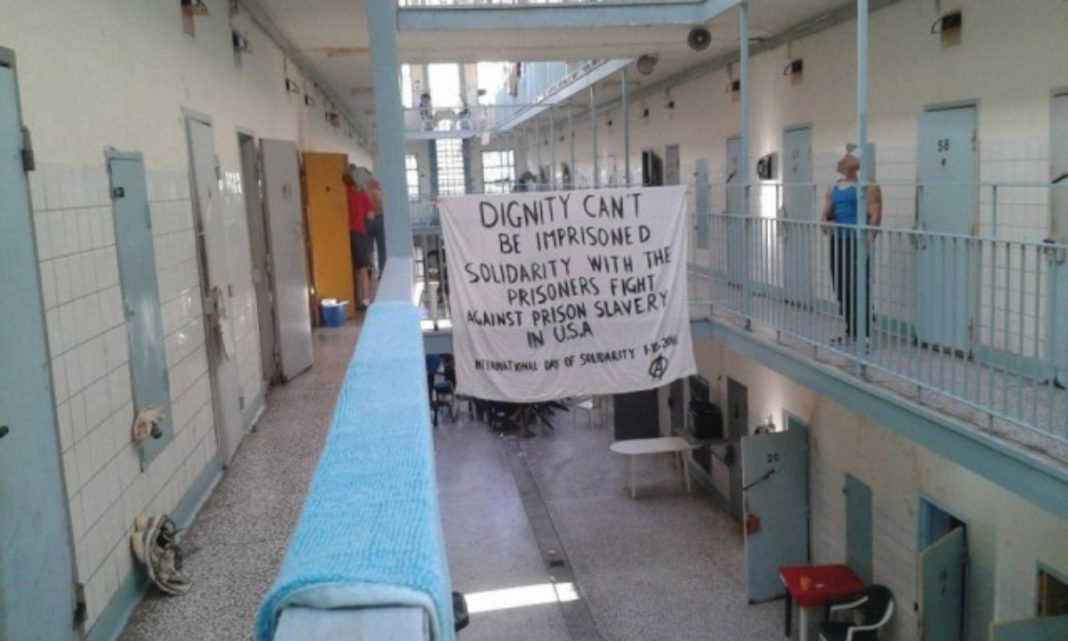 From It’s Going Down:

Below is an interview with Greek anarchist prisoner Christos Tsakalos that discusses the situation of heightened repression and resistance inside of Greek prisons, and discusses the influence of the US prison strike on Greek prisoners.

The following is an interview with anarchist political prisoner Christos Tsakalos who is currently in his 7th year of 180 year prison sentence in the Korydallos prison of Athens, Greece. He is accused of association with the revolutionary group known as the Conspiracy of Cells of Fire or CCF. Christos has refused to ever claim innocence as he refuses to kneel with remorse for acting against his enemy the state and capitalist society. He was caught while on the run from the state in 2011 in the city of Volos. He has been accused of bank robbery, participating in dozens of actions against the state and capitalism claimed by CCF, and given 115 years for a prison escape in itself. He has remained active throughout his time in prison, and has shown inspiring integrity in his refusal to cooperate or compromise with the state.

CCF was a group that was formed out of the December 2008 uprising in Greece that resulted from the police murder of a 16 year old boy Alexandros Grigoropoulos. The group saw defeat and futility in the street protests happening both in reaction to this murder, plus the dawning austerity of the 2008 crisis, and began a clandestine campaign of revolutionary action. With an extreme effort by the state to crack down on “terrorist” groups, CCF faced an extensive operation against them, resulting in the imprisonment of alleged and admitted members, plus a new dawn of modern surveillance and counter-insurgency strategies by the typically disorganized Greek state.

Christos is one of many political prisoners in Greece who have remained active in prison, and has openly declared solidarity with the prison strikes happening in the USA. There have been solidarity actions in Greece this year alone at the Korydallos and Larissa prisons of Greece. END_OF_DOCUMENT_TOKEN_TO_BE_REPLACED

On Tuesday 23/10 at 10PM in the Korydallos Prison Judicial Hall, the Court of Appeal continues for the 250 explosive and arson attacks by the CCF. 10 members of the organization were sentenced from 21 to 28 years in prison.

Comrades who are prisoners of the state are part of our struggle and part of us.

Solidarity with prisoners and persecuted comrades is inextricably linked to the struggle for the revolution, for a society of equality and freedom, for anarchy.

On Friday, July 20th at 10AM, in the Korydallos Prison Special Court, the Court of Appeal continues for the 250 explosive and incendiary attacks by the Conspiracy of Cells of Fire.

The accused are the 10 members of the organization who were sentenced from 21 to 28 years.

Comrades who are prisoners of the State are part of our struggle and part of us.

Solidarity with prisoners and persecuted comrades is inextricably linked to the struggle for revolution, for a society of equality and freedom, for anarchy.

IN-OUT
A network of counter-information and solidarity for political prisoners.