On September 30th, 2019, the trial with 4 anarchists and one environmentalist accused in operation Fenix 2 will be taking place at the district court of Most, at 8:30 a.m. Come to support them at the courthouse or by any solidarity action. Let them know you are not apathetic to their future as you are not towards the freedom of all of us. Any way of expressing support is welcomed!

What is Fénix 2 about? (Czech Republic) 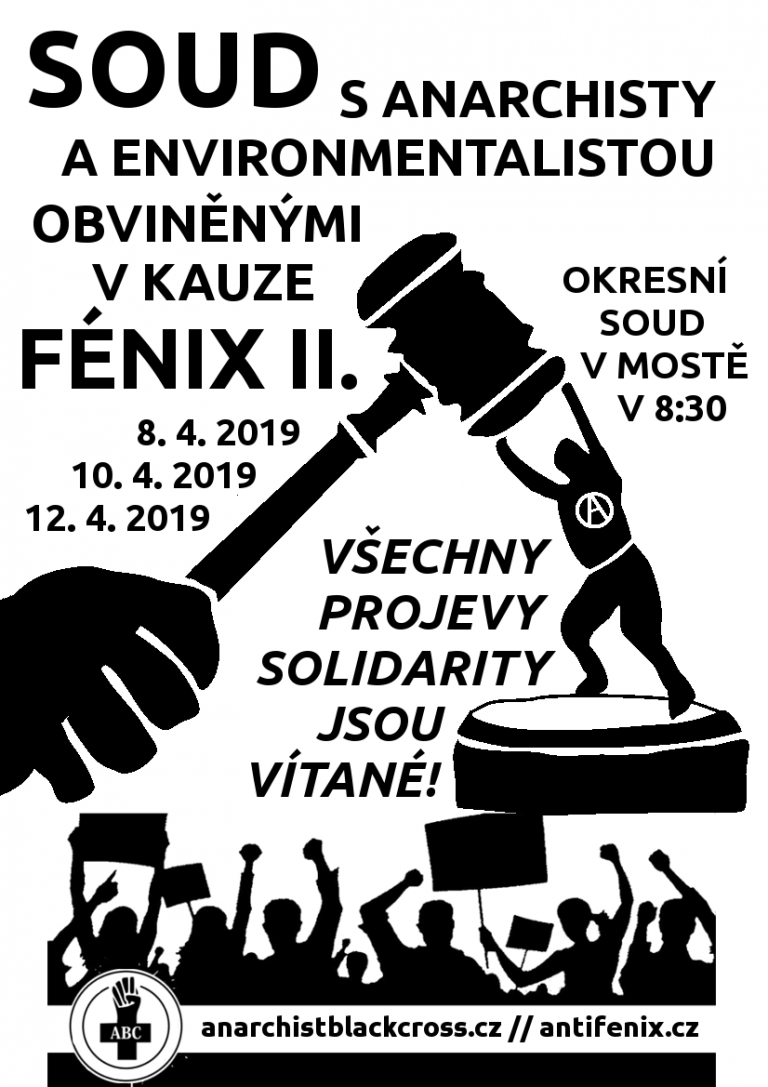 For a long time, we hesitated how we would take the word. First of all, we have led discussions that have allowed us to understand what we have. Then we set up this site https://kronika.noblogs.org/ about global anarchist practice. That’s what we missed here, and that makes sense to us.

There are many important topics and we do not have the capacity to do it with everyone. We will try to bring at least some information about attacks, campaigns, projects, communiqués … about living anarchist practices.

In the way, there are state pawns and their fake critics, such as „anarchists“ from academia, leftists, journalists, pacifists and other reformists. We will go against their way. We will be of explaining our attitudes here. No, we do not believe we will change the strength of the arguments of their attitudes. But we want to bring
food for the brains to our comrades. END_OF_DOCUMENT_TOKEN_TO_BE_REPLACED

Network of Revolutionary Cells: ‘Call to Fight: Sabotage the activities of those bastards!’ (Czech Republic)

We see that the repressive campaign on the anarchist movement does not cease. Examples are enough: The operation Fénix case in the Czech Republic, the case of the Warsaw Three, charges of bank robbery in Aachen, courts with rebels against the G20 summit in Hamburg and other cases.

Cops, judges, prosecutors, mass-media. They are haunted, imprisoned, robbed, manipulated. This is a challenge to all Revolutionary cells and other groups and individuals. Do sabotages the activities of those bastards. Turn them into terrain, technology and structures. Organize resistance. Support the fugitive and their loved ones.

What destroys us will stop by fighting.

‘All power to the imagination?’ – Text by persecuted anarchist comrade of Anti-Fenix, Lukas Borl (Czech Republic)

When extensive strikes and workers’ and students’ riots took place in France at 1968, one of the slogans back then was “All power to the imagination”. Czech police and courts now have their own interpetation. They assert their authority through fostering their own imagination.

When police wanted the arrest warrant on me, their claimed reasons for that were speculative statements and bunch of random bullshit. Obviously, it was enough for getting the warrant. It is even scary, how powerful their imagination can be.

It was written in certain documents: „Lukáš B. doesn’t have any permanent residence in Czech republic. Based on current investigation it was found out, that in time of October 2015 till December 2015 he was moving on the territory of Slovakian republic in Žilina town surroundings. Then, at April/May he was moving in Slovenia in Ljubljana city surroundings. END_OF_DOCUMENT_TOKEN_TO_BE_REPLACED

In addition to the “3 years of lack of evidence” pamphlet, we made a timeline A2 poster “Repressions in so-called Czech republic”. Please spread that <3 ... Please have a look and download for printing and spreading here: https://antifenix.noblogs.org/post/2017/11/10/repressions-in-so-called-czech-republic-timeline-a2-poster/

Have a good day!

The Fenix case uproar, consists of a lot of accusations of many crimes, ranging from the one of so-called “promotion of terrorism” to the one of preparation of terrorist attacks. These are the ones that were most discussed at the latest Municipal Court Hearing in Prague. During their verdict, the judge acquitted all the five defendants of the Fenix 1 case. Is it a victory? Why this decision isn’t final? Followed article is a translation of a month old overview over the court hearings and some analyses of our situation and experience, originally written in Czech language.

This long court hearing was about five anarchists, three of them accused of plotting a terrorist attack on a train carrying military paraphernalia. Two of them were accused of knowing about such plans and not having stopped the presumed authors. Two of these five people were also accused of preparing an attack with Molotov cocktails on police cars during the eviction of the Cibulka squat. Basically, according to the deployed police agents, there are in total five people and three different crimes involved. (And all this is just for Fenix 1, because some of these people are facing further accusations in the context of Fenix 2). END_OF_DOCUMENT_TOKEN_TO_BE_REPLACED

UPDATE: All the accused in “Fenix 1” are found innocent on all points. The verdict is inactive due to the appeal of the state attorney but all the custodies and so on are taken down and as a first step this is quite a relief. There will be more trials. There will be a proper post about it soon.

Tomorrow morning the city court in Prague will decide whether or not the 5 anarchists in Fenix 1 (the conspiracy of a preparation of a terrorist attack against the train carrying military equipment – entrapment by the state agents) will be found “guilty”. The sentence will be in the morning hours and besides deciding over the lives of the five, it will show how far police can take it in repression against counter-cultural movements or groups.

We will for sure inform you as soon as we know more. If they will be sentenced we will do an international call for action and organize stuff here.

All of this case cost us many emotional and physical resources and after all the court hearing we again hit the bottom of our economical budget, so if anyone has any extra money, we would very appreciate it.

We apologize we didn’t invite for the court through our blog, but we can’t access it due to admin problems. Hopefully it will change within hours.

Two activists Markéta Všelichová and Miroslav Farkas were arrested on the 13th of November 2016 while attempting to cross the Habur border crossing from Turkey to Iraq. They were accused of participating in terrorist activity in Northern Syria and taken into custody.

On the 2nd of August they were sentenced to 6 years and 3 months for belonging to the Kurdish defence forces YGP/YPJ (these non-state kurdish groups are fighting Daesh/ISIS, the turkish army which has been repressing Kurds for several decades, and the dictatorial regime of Bashar Al-Asad).

Markéta had been to Rojava twice, according to her own words she joined the defence forces and fell in love with the region and its specific cultural and political situation. This time she and Mirek were on their way to Rojava, where they planned to set up a field hospital for fighters and civilians, and eventually help with defence, as she says herself. Together they made a campaign before their big journey, during which they wanted to acquire the necessary material, while also not being afraid to make lectures about life, fighting and revolution in the region. These public activities also probably raised the interest of Turkish agents.

In an interview Markéta said she feels with people, who risk their life in the fight against evil, that she would like to help Rojava with anything it needs, and that she realizes that as a European she has greater possibilities how to get involved and help. A bit my own way, but with them, as she said. END_OF_DOCUMENT_TOKEN_TO_BE_REPLACED

It was quite clear, that releasing Lukáš Borl from the prison doesn’t mean the end of another continuing of Fenix operation. More precisely Fenix 2 (The case of Lukas Borl [+ 4 other people]). One of the charges brought against Lukáš is establishing, supporting and spreading a movement leading to suppressing human rights and freedoms. But the police will have kind of a hard time to prove existence of a group, where ther is only one person. Even for terrorism are needed at least three people, every newbie at the police academy knows that.

And members of police units are not counted as part of the group! And so genius idea was born and it was clear that at least the second episode of Fenix needs a better reputation. END_OF_DOCUMENT_TOKEN_TO_BE_REPLACED

Lukáš Borl, an anarchist imprisoned on remand since September 2016 was released on bail today. That means that he will wait for the court outside of the prison walls. It is the first time since the beginning of the Operation Fenix when no anarchist in so called Czech Republic is held in prison.

In the end of November of 2016 we had the opportunity of recording a presentation in Berlin by the Anarchist Black Cross in Czech Republic on the topic of Operation Fenix. The talk comprised the following topics: a short review of what had happened, the use of the term „terrorism“, the topic of solidarity in Czech Republic and in general, a reflection on mistakes and how to deal with repression and police infiltrators, and finally the current development of the anarchist movement in that country.

You’ll find the audio (to listen online or download in different sizes) here.

You can find other English and Spanish language audios here.