Frankfurt/Main, Germany: We are all 129a!

§129a Investigation in Frankfurt/Main, Germany

17.06.2020, 6.00 a.m., windows break. The residents of the shared flat jump out of the bed because they think Nazis are smashing the windows, but the loud shouts, and hooded people with flashlights leave no room for discussion until all residents of the living community are already in pain on the floor. It takes a while for the excitement to subside and they realize that there are more than twenty Federal Police BFE cops in the little apartment. Others are waiting in the entrance and have positioned themselves around the house. It takes even longer until a search warrant is finally handed out and the lead management is handed over to the investigating BKA. They try to act formally legally correct, their goal is to work legally clean. These are the different sides of the repression, the hooded thugs are supposed to intimidate, the jovial BKA cops collect everything they can get and organize the whole thing.

The accused’s room and common rooms are officially searched, and the rooms of the other residents are filmed.

The search warrant is issued by the Federal Court of Justice (BGH) on January 20th, 2020. They are investigating against the person concerned and at least two other unknown perpetrators for being part of an alleged “terrorist organization”. On New Year’s Eve 2018/2019, they and many others allegedly attacked the BGH branch in Leipzig. DNA finds on clothing and camera recordings are brought forward. The police are looking for certain clothing, communication media, other references to this alleged association. 3 laptops, a USB stick, papers and small items such as a balaclava were confiscated. END_OF_DOCUMENT_TOKEN_TO_BE_REPLACED

During the night of the 14th to the 15th of October in Frankfurt-Heddernheim we destroyed two vans of the company Vonovia with fire. We took care that no people or other objects were damaged, only the vans were completely destroyed.

Vonovia, the largest real estate company in Germany, is guilty of forcing people out of the districts, including Frankfurt, which continue to be gentrified. The sole driving force of the group, profit maximization via privatization and luxury refurbishments, means that as usual the tenants suffer. Since we still lack the ability to expropriate the group, we wanted to draw attention to the impact that private housing companies and Vonovia itself have and the great damage they cause by sabotaging it’s day-to-day business.

The anger against the housing policy is felt everywhere and there have been many attacks surfacing. Therefore, we are in solidarity with the fight against gentrification on many levels and look forward to the Mietwahnsinns demo on October 20th in Frankfurt.

In solidarity with a city for all! 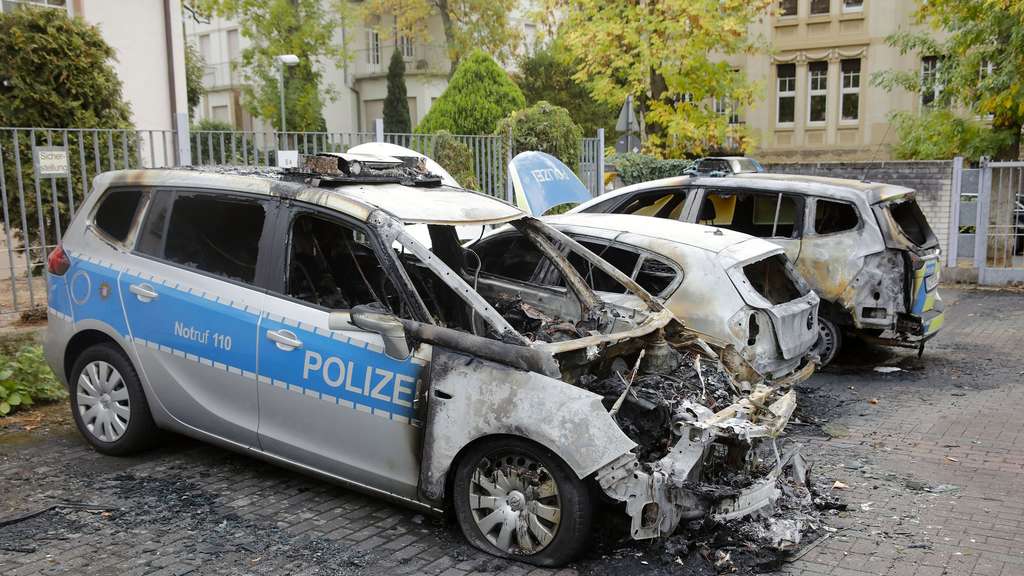 In Offenbach, many people hate the police. On the night of the 13th to the 14th of September 2018 we torched some cop cars in the parking lot of the cop station in Offenbach am Main.

The letter claiming responsibility which was also sent to the media:

The best way to explain what we do is that everyone can understand the image of burning cop cars.

In Offenbach, many people hate the police. END_OF_DOCUMENT_TOKEN_TO_BE_REPLACED

06.07.18: Last night we destroyed 6 Deutsche Bahn (German Railways) vehicles near Frankfurt West railway station. We are opposed to German support for the war of aggression by the Turkish government in Northern Syria as well as the ongoing raids and arrests of left-wing activists.

We set fire to six Deutsche Bahn vehicles used for making repairs. We deliberately carried out our action in a way that ensured there was no danger to anybody. Deutsche Bahn is a leading logistics partner of NATO. Dying and killing in the name of our ‘democracies’ is not an option for us. We will continue to side with the revolutionary forces in Syria and elsewhere.

Here in Germany there are enough reasons too, we do not even know where to start with this police state: the complete erosion of what once referred to itself as a constitutional state. Mass public manhunts. The raids against German technology associations because they have a donation account for a legal US email provider and for using an email address that was used to promote protests against the AFD! (Alternative for Deutschland, right-wing populist party)* Or the banning of Linksunten Indymedia. Or the arrests in the Rhine-Main area for alleged participation in the G20 protests. Or the searches in France, because those affected allegedly raised their arms at the G20. What a complete misunderstanding of every situation in the Schanze.**
END_OF_DOCUMENT_TOKEN_TO_BE_REPLACED After the Nazis’ show of force last Sunday in Cologne, largely tolerated by the police’s repression of antifascists’ counter-demonstration, the Nazis and their football hooligans are planning “a revolution” on November 9 in Berlin, and attacks against Rote Flora autonomous social center in Hamburg during another demonstration on November 15. They plan similar demo in Wuppertal this weekend.

On November 9 in Berlin, Nazis plan to gather in front of the Reichstag to start “a revolution” for white Europe. They choose this date because it’s the commemoration of the Kristallnacht, the pogroms against Jews in Austria and Germany on the night of 9/10 in November 1938. The terror inflicted on the Jewish population by the SA paramilitary assisted by the local population marked the beginning of the state’s policy of exterminating the Jewish population of Europe. END_OF_DOCUMENT_TOKEN_TO_BE_REPLACED

Come to the Opening of the European Central Bank! | Frankfurt Fall 2014

A Call from the Destroika for a Fantastic Convergence of Resistance

From issue-less “days of action” to inconsequential general strikes, the recent struggles in Greece, Spain, Italy, France, and Portugal invariably seem to stumble over the limit of their own national frame of reference. The standpoint of the nation, long considered synonymous with political activity per se, be it that of the State or one or another revolutionary party, has revealed itself as being the very scale of our own collective powerlessness. It is this powerlessness, turned against itself, that fuels the fire of so many nationalist resentments. END_OF_DOCUMENT_TOKEN_TO_BE_REPLACED

Sibylle S. (witness not cooperating with authorities) stayed four months in prison under ‘coercive detention’ because she had repeatedly refused to testify as a witness against Sonja Suder. On August 6th, 2013 it finally became evident that her continued detention would not change her unyielding stance, so Sibylle walked out free.

On the other hand, Sonja is still in custody.

FREEDOM AND HAPPINESS FOR SONJA AND CHRISTIAN!

In Berlin, the month of December hosted several events under the motto “Behind different windows… but the chains remain the same ones! New year’s eve to the prisons – question, demount and destroy the machine of prison!”, events ranged from discussion about ongoing trials against comrades, the building of a new detention center at the new Berlin’s airport, to a demonstration against the local detention center for immigrants. END_OF_DOCUMENT_TOKEN_TO_BE_REPLACED