While the situation in the rebellious Northern Part of Friedrichshain is calming down for the moment and we find time to build Rigaer 94 back up again, the social war around us is continuing with its normal intensity. We received news about the state attacks on people and squats in Thessaloniki. Here and there we are fighting against the social democracy and confront the social war with polymorphous struggle. Whether in the black july or in our daily local conflicts, we are involved in a common fight that gains power in its mutuality.

In this very moment, the greek state seems to be striking out with a general attack against autonomous structures. In Thessaloniki and in other cities, self-organized structures of migrants are especially becoming more and more endangered. While fullfilling its function as a manager of migration-streams, the state attacks those who try to move, self-determined, through a world of exploitation and oppression and who won‘t bow to it‘s authority.

Three occupied houses in Thessaloniki were affected and over a hundred people arrested. One person was killed during the eviction [Correction received: one day after the three evictions, a young migrant woman died due to medical negligence at one of the state’s detention facilities in Thessaloniki.]. In Athens, squats which are being used by migrants are also threatened with eviction. The goal is to create an atmosphere of fear, while oppressing those who are self-organising and attacking the authority of the state. END_OF_DOCUMENT_TOKEN_TO_BE_REPLACED

The last days of May, in the centre of Athens, we torched two ATMs of Alpha Bank, as well as an excavator used for the metro line extension in the area of Exarchia.

We perceive the State’s effort to upgrade the control and disciplining mechanism as a way of establishing a consumerist and peaceful normalcy everywhere, and attacking spaces that diffuse anarchist theorisations and practices – which is why we choose to attack every form of Power with all available means.

We also carried out this action in memory of our comrade Mauricio Morales, who was killed on May 22nd 2009; and in solidarity with our incarcerated comrades.

ALL OUR FALLEN COMRADES COME ALIVE
THROUGH THE FLAMES OF INSURGENCY
GUERRILLA GREETINGS TO THE CCF COMRADES
GALLOWS FOR THE JUDGES, BULLETS FOR THE COPS
FIGHT NATIONS, SQUAT THE WORLD

Cell for the diffusion of insurrectionist violence / FAI-IRF

This text is a response to the call „Fuck nations, squat the world“. The discussion about squats as focal points of lawlessness and coordinated anarchist action are held everywhere across the world. Surely the „rebellious Nordkiez“ (the northern area) in Friedrichshain is relevant for many people, not only those that inhabit it. And what occurs outside of this bubble, for example the fascist and state attacks against Greek squats and in the area of Exarcheia, is connected to it.

Report from the Nordkiez – where the state of emergency became normality

There have been innumerable episodes in this neighbourhood. Our story is that of an area of constant unrest, which has been a place of autonomous struggle for the last 26 years. We continue writing this history by declaring that the episode of the „Dangerzone“ is over, it is time to move forward in our struggles against the state, capital and the entire apparatus of domination and exploitation which surrounds us.
END_OF_DOCUMENT_TOKEN_TO_BE_REPLACED

Text by CCF : Urban Guerrilla Core in the context of the international squatting campaign (Greece)

Some thoughts on the invitation sent by the comrades of Papamichelaki Squat, of Teflon Library, of Radiofragmata and of Continuous Deconstruction, about the Squatting issue.

The following text corresponds to snapshots and features that we can find in the current squats in Greece.

I) Property is theft.

“Property is theft” says one of the oldest anarchist slogans. It is the theft of collective life, it is the abolition of community, it is the refuge of taking distance from the commons, of fear.
Property and its twin sister power, gives birth to the distinction of people based on titles, positions and privileges… Just like the sky has no borders, the land should not be owned.
A human from a collective being becomes an owner. An owner not of their life but of walls, windows and furniture…
Squats have begun as a form of denial of property, and of self-organised expression. The course of the squat movement has many shades… Some of them are more militant, others are more harmless… There are anarchist squats and alternative squats, squats which are cores of lawlessness and squats which are dehydrated cultural centers.
Today in Greece there are much more squats than in the past, not only in Athens but also in many cities. END_OF_DOCUMENT_TOKEN_TO_BE_REPLACED

Regarding the link of dynamics of the people who take action in squats and choose to clash with the above aspects of the dominant complex, we believe that a necessary tool is the coordination of individualities and groups which act within and around the squats, so as to able to form a living organism with direct offensive reflexes. The coordination and the interaction between squats mustn’t be determined by the attacks from the state and its mechanisms -official or unofficial- but to form a cell of essential political fermentation and a meeting place of our individual and collective negations and desires. END_OF_DOCUMENT_TOKEN_TO_BE_REPLACED 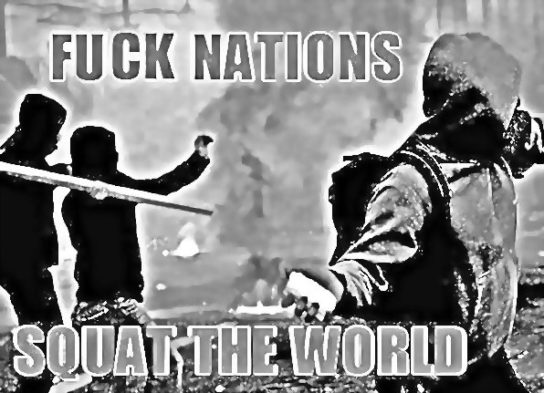 Conspiracy of Cells of Fire: Call for international ‘Fuck the Nations, Squat The World’ actions (Greece)

The well-regulated normality of social life within systems of power is not the product of a one-dimensional strategic perception that follows a determined path, but on the contrary it’s the totality of many well-thought and tested logics, tactics and practices. It’s a fact that power would not be what it is today, had it not been in a constant process of self-evolution covering previous deficiencies and weaknesses in the management of social tolerance of its followers. It is not accidental that there have been and continue to appear entire political and philosophical currents that examine the necessity of power structures within human societies. Through the constant appearance of experiments, studies and dissertations, a series of political and scientific think-tanks arm the hand of power with more and more specialized methods that ensure social tolerance.

»If the initial imperceptible signs of disarray are not combated, then chaos and anarchy will soon prevail.» The above sociological interpretation, which posits the essence of a particular theory, upon which a variety of repressive plannings have been formed, is inextricably connected to the way the enemy handles all possible dangers of destabilization since their birth and in their totality, even before they have flesh and bones. Speaking of the danger of destabilization which may be manifested in subversive radical currents, we could say that the zero-tolerance doctrine aims at their preventive tackling. Different phases of preventive tackling have been noticed. It is observed that during the first phase, with the beginning of a new subversive current that internally acquires a more radical and aggressive logic, repression is upgraded almost instantly and becomes excessively disproportionate in order to stop any further sharpening of the current’s offensive characteristics. Those who express this combative logic are met with the ruthless vengeance of the system that does not hesitate to turn against their entire social circle in order to create conditions of generalized fear. END_OF_DOCUMENT_TOKEN_TO_BE_REPLACED

It’s been about four months since the action campaign of Black December finished. The subversive experience of Black December and the density of anarchist action that developed was a springboard for fermentation and discussions for the reconstruction of anarchist methods in an informal shape. The actions in reference to Black December have continued until today, while cycles of discussions in and out of prisons have reached a number of conclusions, proposals and positions, that have as a common reference point the desire for intensification of our attack on the sites of power.

One part of those discussions was the proposal for an informal anarchist platform that lays the foundations for an informal coordination for diverse anarchist actions, thus enabling them to set in motion autonomous struggle campaigns with our own initiatives and forces, thus producing for ourselves the events and strategies we think necessary for today. A choice that reflects our desire to create centers of autonomous thinking and acting for those who challenge the existing social system. Following the initiative of the comrades from Rethymno, there was the proposal for the informal anarchist platform to be named The Insurrectionary Association of Theory and Practice, a proposal has been accepted by some comrades and is an open and simultaneously informal coordination structure that is still being worked on by those comrades who wish to adhere to it. END_OF_DOCUMENT_TOKEN_TO_BE_REPLACED