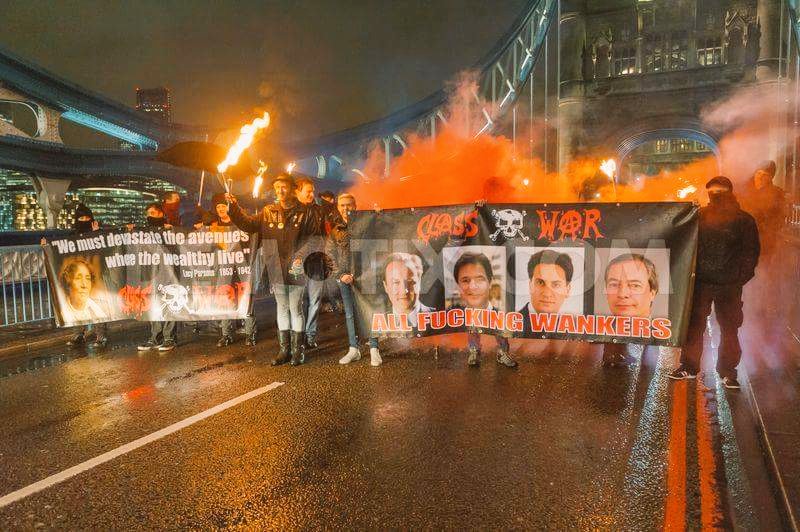 Two brave and uncontrollable brothers (David ‘Paddy’ Foster & Joe ‘Little Joe’ Foster) who were arrested at the squat Telepathic Heights after the disturbances in Stokes Croft, Bristol, have been in prison since the riots with two other young comrades (Ben, and another unknown one who was disappeared into the jail without so far any chance of finding them.). END_OF_DOCUMENT_TOKEN_TO_BE_REPLACED

Update 30.4.11: 1 comrade remains inside the cells in Bristol from Telepathic Heights, accused of manufacture + possession of molotovs + making threats with the items. Others arrested that night have received charges or are on bail, whilst a few have already been before the judge receiving low penalties.

April 21, 2011. 10pm. A riot starts after a 160 strong multi-regional police force coordinated assault shuts down a district and breaks down the door of a squat named ‘Telepathic Heights’ in Bristol.

The cops then violently harass local people and get attacked in return. Telepathic Heights is in the busy cultural area of Stokes Croft, Bristol, where there are many bars, cafes, squats, community projects, etc. 300 people fight the police for hours and hours in response to the police occupation of the neighbourhood. A corporate supermarket is looted and destroyed, whilst none of the other (independently-owned) shops on the streets are touched in the disturbance.

Everyone is in the streets. Barricades are lit, the cops face an anger that has not been seen for a long time. It seems like it is just beginning. Bristol has been burning now for some time… it will be a hot year of discontent.

9 people are arrested: 5 from the street, and 4 from Telepathic Heights accused of possession and manufacture of molotovs.

“On Sunday night at 1:45am the Tesco’s on Hucknall Road was visited by some individuals. As a result of this visit it’s front door was smashed and ‘every little hurts’ was written on it’s wall. We did this because of hatred for the physical manifestation of capitalism that is Tesco’s.

We also did this as gesture of solidarity with the people of Kulon Progo in Indonesia who fight with beauty, rage and defiance against the capitalist forces which are trying to destroy their land. We know our efforts are slight, but they are sent with love for anyone who struggles against the systems of destruction and domination. END_OF_DOCUMENT_TOKEN_TO_BE_REPLACED