On the 20th of April starts the second grade trial not only for the C.C.F. Case and some of its actions, but also for some other different cases of anarchists accused for actions of revolutionary violence. All these cases were attached to each other in a single trial, in order to serve many different and parallel judiciary manipulations against all those accused.

Regarding ourselves, we make it clear that towards the legal processes of this court, as well as any of its issues, we are completely indifferent. But even if the legal dimension is not one of our concerns, we’re interested in taking advantage of this opportunity to defend once more the action of the Conspiracy of Cells of Fire, to convert one more court-trial into an arena where anarchy stands against the enemies of freedom. A chance to confront again the technocrat servants of Justice and show that they are responsible for the misery that their existence carries.

The starting point of the state’s repression, the raid and invasion at the house in Halandri on 23/09/2009 and the arrest of Haris Hadzimihelakis – a member of the Conspiracy as well as that of others related to the case or not, and the barrage of persecutions that followed was a strong surprise for an important part of anarchy. It is a fact that a great shadow of fear spread causing a generalized numbness which contributed to the halting of the aggressive polymorphy that occurred during the period 2008-2009, as direct action decreased steeply.

At the upcoming trial inside the courtroom, a section of the history of the Conspiracy of Cells of Fire, which the state seeks to punish through the dead letters of the pages of the penal code which constitutes the peak of repression against the anarchist prisoners, will live again.

The dozens of arson attacks against state and capitalist targets, the bombings of politicians’ homes, the arrest warrants, captivity, illegality, the upgraded explosive devices in courts, prisons, banks, homes of fascists and other enemies of the revolutionary cause, are our own subversive experience as it proceeded through the Conspiracy, and we will defend it as such.

By defending politically our actions, we want to make it clear that we remain impenitent for our choices and actions through the Conspiracy of Cells of Fire, and we aim to abolish the mapping of our history with the laws and the “wooden” language of the judges and instead impart to it its real characteristics, those of the decision of an anarchist group to arm themselves and carry out attacks against the system and its servants.

The fact that after so many years in prison we continue consistently supporting anarchy, the urban guerrilla and the option of all-out attack against the existent is our way to remain deniers of this society and its civilization.

Seven years later therefore, we don’t regret anything. The Conspiracy of Cells of Fire is more than a simple tool. It’s part of our own life and we’re never going to renounce it.

Because if time could turn back we would still walk the same path, because the fire of anarchist revolt still burns in our hearts.

Today more than ever there is a need to coordinate our passion to destroy the authoritative structures that surround us and to throw ourselves into a battle seeking freedom through thousands of acts that tries to disrupt the normality of the social machine.

The nuclei of the Informal Anarchist Federation, anonymous comrades who disturb the peace of the capitalist metropoles with their attacks, the polymorphous anarchist action trimming the function of sovereignty, the Black December project, the Insurrectionary Association of Theory and Action, is nothing but pieces of a mosaic of actions that build again an anarchy that is a real danger for power and its civilization.

Let’s turn these plans into an everyday war against the state and let’s venture into the ceaseless battle for the resurgence of the constant anarchist insurrection.

The bet is still open…

The members of the Conspiracy of Cells of Fire – FAI / IRF 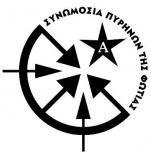 Declaration for the 1st November letter-bombing against European State targets by Conspiracy of Cells of Fire. Read also the Letters of Gerasimos Tsakalos, Panagiotis Argyrou and Harris Hatzimichelakis, plus the International Call for Solidarity.

Currently our three brothers, three members of our group are incarcerated in the prisons of Greek democracy. Their absence from our side is not rectified through the text of a proclamation. The words seem hopelessly small and insignificant against the intensity of situations and emotions that we share with them. END_OF_DOCUMENT_TOKEN_TO_BE_REPLACED