13.01.2020: The Şehit Sorxwin Roboskî and the Şehit Soro Amed Revenge Units carried out actions against factories in Başakşehir, Istanbul that supply clothing and equipment to the Turkish military. The Revenge Units issued a written statement explaining their actions that took place on January 11th, 2020:

“On January 11th, our members organized an action against a factory that makes military clothing for the occupying Turkish army. The factory is located in the PİK Dökümcüler Industrial Estate in the Başakşehir district of Istanbul. 8 minibuses owned by the factory were destroyed as a result of this action. At the same time as this action was carried out, members of our unit also sabotaged a factory on another block located in the same industrial estate. This factory manufactures equipment for military vehicles belonging to the occupying Turkish army. END_OF_DOCUMENT_TOKEN_TO_BE_REPLACED

Posted on December 10, 2019. Note A2DAY: Ukrainian media, citing the police, report that on December 10 the tower of the operator Vodafone, not Lifecell, was burned in Kiev. A2DAY: “Makhnovists” affinity-group confirmed that due to the mistake tower of another operator was attacked.

In the night of December 10 a group of anarchists burned down the cell tower of Lifecell operator settled by the crossroad of Hostomel road and Big Ring Road in Kyiv. Lifecell is owned by the Turkish company Turkcell. This company is the participant of aggression of Erdogan’s regime against the people’s self-government in Kurdistan. The latest episode of its criminal politics is the invasion of Turkish army into the Democratic Federation of Northern and Eastern Syria (Rojava) in October 2019.

Turkcell constructs its towers in the areas of Syria occupied by the Turkish government as it happened in Afrin, Shahba and Idlib. This mobile network which is under control of Ankara authorities appears in every place invaded by Erdogan’s soldiers. Kurdish guerillas destroy Turkcell towers — we are proud to take the torchlight of the struggle from their hands. Revolutionary resistance and solidarity lie beyond state borders and national boundaries.

We performed an attack against Lifecell/Turkcell also as the response to the violent incident which took place in front of Embassy of Turkey in Ukraine. On October 11 anarchists and people from Kurdish community organized the peaceful demonstration against the aggression of the Turkish state. Embassy workers have attacked demonstrators and smashed a face of one of the female comrades participated in the event. Violence should not be left without a response.

Freedom to the peoples — death to the Empires! 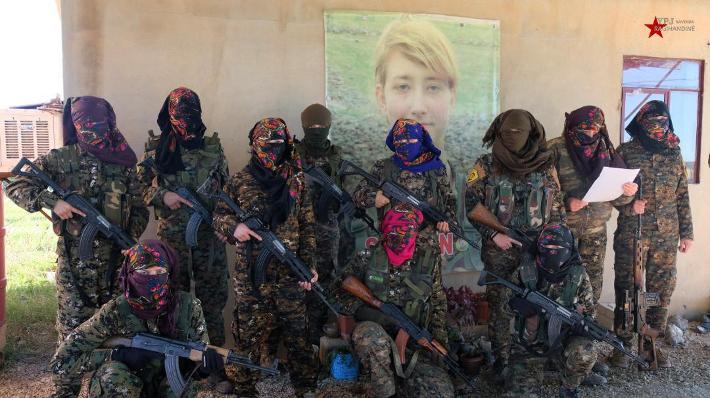 Those five days of supposed firearm rest actually have been decisive for the United States and Turkey, to redefine the conflict, to realign the situation of war, confrontation and resistance against our forced withdrawal that no one expected. No one could believe it, after 11 days of resistance, beautiful and very hard at the same time. Leaving the city. The Turkish invasion of Serekaniye did start some days before, 8th of October, with a bombing of our military post that hasn’t been answered, for not to unleash what happened later anyway. It was an attempt of the friends to protect the people and the society. But the next day, about 3 to 4 pm, another bombing of a post of the YPG took place, where 5 friends have fallen, and since then they bombed the whole border. END_OF_DOCUMENT_TOKEN_TO_BE_REPLACED

In October 2019 the Turkish state invaded Northern Syria. The target of their aggression was Democratic Federation of Northern and Eastern Syria (Rojava). By the fault of rulers blood is being shed again and peacful people are suffering and dying. The goal of the president of Turkey Erdogan is to destroy revolutionary Autonomy of Syrian Kurds. Revolutionaries of Kurdistan build a society of stateless popular self-management. And Rojava became an example and model for Kurds in Turkey. That is why «Turkish sultan» started a war.

In the night of November 11 we destroyed two cell phone network towers of the Lifecell company settled by the Zahaltsy and Piskivka settlements in Kyiv region. Lifecell is fully owned by Turkish giant TURKCELL, the largest mobile provider of the State of Turkey. As a large corporate tax payer Turkcell appears as the indirect sponsor of the aggression of Erdogan`s regime. There are also widely known connections of the provider with the ruling «Justice and Development Party» which construct the basis of the current system in the country. These are the reasons why we consider the property of Lifecell as a legitimate target for the sabotage.

We stay in solidarity with revolutionaries and people of Kurdistan. They fight the occupation and oppression — for the liberty and social justice. We call to everyone who cares about the situation to participate in the resistance in a manner according to their abilities.

Freedom to the peoples — death to the Empires!

A coalition of Bristol groups blocked all the entrances to BAE and MDBA in Filton this morning, [25/10/19] preventing the arms factories from opening. We stand in solidarity with the people of North and East Syria and against Turkish fascism! #Riseup4Rojava #BoycottTurkey #StopArmingTurkey

On Monday, October 21nd, we send a message to several world media. We wrote an e-mail, that the bomb is in Istanbul Airport (Turkish Airlines company) and in MKEK – Mechanical and Chemical Industry company in Ankara.

There was no bomb. We just wanted to start a evacuation. When the police evacuate some place, they block production in this place.

This is sabotage of Turkish economy!

This is sabotage of Turkish army!

This is our support for revolutionary fighters in Rojava!

Greece: Statement by Pola Roupa and Nikos Maziotis on the Planned Turkish Invasion of Rojava

After a period of a hypocritical stance by the American state towards the Kurds of Northern Syria and the other rebellious peoples of the region whom they supported militarily as they gave their lives in battle against ISIS (Islamic State) and their armed forces of men and women liberated one city after another by expanding the revolutionary project of Democratic Confederalism, the US regime has shown its true face by giving the green light to the Turkish state for the military invasion of the region. It is the expected development of the “democratic” American state and the “democratic” West in general. END_OF_DOCUMENT_TOKEN_TO_BE_REPLACED

In the afternoon of 9 October the fascist Turkish occupation army and its Islamist murder gangs started their war of aggression against the liberated areas of Rojava. With massive artillery fire and widespread air raids on towns and villages along the Syrian-Turkish border, the front was opened and ground invasion began.

The fascist AKP-MHP regime is turning its threats into reality and under the cynical name ‘Operation Sources of Peace’ has launched a new campaign of extermination against the people of the region. From the North, jihadist gangs try to advance to the cities and settlements along the border and the villages in the vicinity have become the scene of fierce battles between the self-defence forces of the population and the invading troops. While the fascist invaders attack the civilian population of Rojava under the protection of their heavy weapons, artillery and the bombardment of their war planes, sleeper cells of the Islamic state carry out coordinated attacks in the interior and spread fear and terror. END_OF_DOCUMENT_TOKEN_TO_BE_REPLACED

‘We Will Never Abandon Rojava’ by Keith Malik Washington (USA)

“Revolutionary change will not come as a singular event, nor an immediate exchange of power, but an ongoing struggle to free us all from the bonds of oppression and distribute power to communities of resistance. The illusion that a small group can seize state power and enact the will of the majority has dried up in the gulags, prisons, and killing fields of nation-states around the world. The Cantons of Rojava, a network of councils without the State, has introduced a new revolutionary paradigm… As we formulate our next steps, we harken to Rojava as a model. Just as it is grounded in the Kurdish liberation movement in Rojava, we here must ground ourselves in the black liberation movement against slavery.”

–Burn Down the American Plantation (What We’re Working Towards), pg 68-69, Revolutionary Abolitionist Movement

Did you really think for one moment that I was going to remain silent?

I began working with RAM because of Rojava. The Kurdish struggle struck home. Do you realize that these Sisters and Brothers in Northern Iraq and Syria helped fight and defeat ISIS? Yeah! That is right! These beautiful people, who Donald Trump wants to abandon, sacrificed their lives for the good of all. I was careful when I decided to speak out. Right around the time Trump made his announcement that the U.S. would pull out of Syria – George W. Bush had died. It wasn’t really good for me to say what I needed to say but now I am going to say it!! END_OF_DOCUMENT_TOKEN_TO_BE_REPLACED

“All power to the Kurdish people fighting for their autonomy and liberation.”
Ikarus Gang Solidarity. East Borneo, Balikpapan.

Internationalist from the Hambach Forest in the YPJ ranks (Germany, Rojava)

Elefterya Hambi is an internationalist in northern Syria and is fighting in the YPJ ranks. In an interview, she talks about her reasons why she decided to help create a new social model in Rojava.

Şehîd Şahîn Qereçox, known as Waka to his many friends, was sadly martyred in the fight against Daesh in Hajin on 6th October. He had been serving in the YPG, fighting for the revolution in Rojava for 4 months. For as long as I’d known him he was a loving comrade and a true revolutionary. I’m still struggling to find the words to describe him – he was so thoughtful and creative he defied simple generalisation. Whatever I write will merely scratch the surface of what he meant to me and so many people. END_OF_DOCUMENT_TOKEN_TO_BE_REPLACED

Memorial video for the anarchist internationalist fighter of Rojava Haukur Hilmarsson (Sahin Huseyni). Sehid Sahin has fought against I.S. (DAESH) in Raqqa and martyred while he was defending Afrin from Turkish State’s military invasion.