Paris, France: Against reform and its world, let us multiply the attacks! 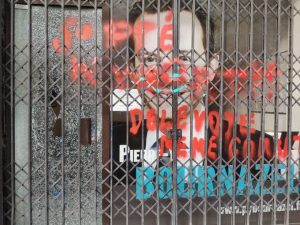 This morning [Friday, January 24, 2020], the inhabitants of the 18th arrondissement of Paris were able to see that the premises of the party Les Républicains [the main right-wing party, formerly “RPR” at the time of Jacques Chirac’s presidency and “UMP” at the time of Nicolas Sazkozy’s presidency] were stormed tonight: the window was shattered and the words “Juppé, Woerth, Delevoye, the same struggle” has been left [Alain Juppé was prime minister during Chirac’s presidency; Eric Woerth was minister of labour in Sarkozy’s presidency; Jean-Paul Delevoye, former RPS, former UMP, who now is a member in parliament of La République en Marche, the party of Emmanuel Macron, was the extender of the pension reform project; France in recent months has been agitated by opposition to this reform project.].

For decades, the French state has been imposing its neoliberal policies on us through the various parties in power. Whether it is the RPR in 1995, the UMP in 2010 or LREM in 2020, they all serve the same objective of the bourgeoisie to exploit us for longer and at a cheaper price.

The workers and the exploited are mobilizing en masse to oppose the Delevoye reform, the government’s response is complete disdain, and it counts on passing its law, no matter what the message of the square. In order to make it bend, in addition to the continuation of the mobilization and the general strike, let’s take it directly to those who are our enemies in the social war: political parties, ministries, capitalist institutions. This is an appeal to multiply actions of this kind!

Let’s show them that they are not at home, outside of the rich neighborhoods, and that never will a Republicains’ place be welcome in the 18th [the poorest area in the French capital].

Let us show them that if they destroy our lives, we will destroy their world, and actions of this kind will become more numerous and offensive.

Let us show them that we are not afraid to retaliate with attacks on their attacks!

Against “Paris en commun” [the coalition supporting the current syndicate, Anne Hidalgo, of the Socialist Party, at the March 2020 municipal councils], for a Paris transformed into a commune, thanks to STAVO* for this work!

[Note: In square brackets there are clarifications by the person who translated, useful to understand the context in which the action fits. The acronym “STAVO” means “Section Travailleurs.ses Autonomes Venère Offensive”, in English: “Angry and offensive self-employed workers section”].