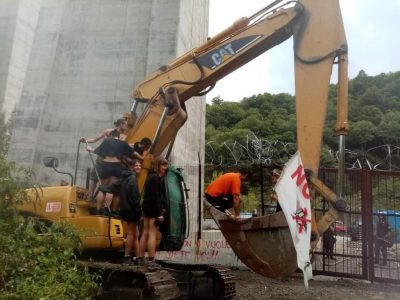 The No TAV campaign in northern Italy has been fighting an expensive, unneeded and corrupt high speed railway link for over three decades. The proposed mafia-linked freight train service from Turin to Lyon has been repeatedly exposed for its fantastical predictions and is slated by local people who see no reason to leave their homes for a white elephant. If you are already thinking about the similarities to HS2 here in England then you are in the right place. I will start by giving a very brief history of No TAV, then an update on recent events. In the second half, I will concentrate on what the Stop HS2 movement can learn from No TAV.

For those who have never heard of the No TAV movement, it is a campaign born thirty odd years ago to resist the construction of a 270 kilometre long high speed railway (Treno di Alta Velocita) between Turin (in Italy) and Lyon (in France). There is widespread opposition on both French and Italian soil, since the railway is a corrupt scheme proposing to transport freight based on fantasy figures and the people who live along the route see no benefit (the train won’t be stopping there). They argue that the already existing railway infrastructure should be improved instead. The resistance is greatest in the breathtakingly beautiful Val di Susa (Susa Valley), which stretches from Turin to the Alps for fifty kilometres. In summer, the valley is bright with colours, the blue sky and green grass bisected by the snow on the mountains. It has a unique environment, since one side sees the sun and the other does not. The train line would rip straight through it before entering a tunnel of 57.5 kilometres to France. This tunnel would be longer than the Chunnel and in fact would just squeeze in as the longest rail tunnel in the world, if it ever gets built. Local people are concerned that drilling into the mountains will disturb uranium and asbestos deposts, that mafia construction will lead to health hazards and that the overall economic case for TAV no longer stands up. END_OF_DOCUMENT_TOKEN_TO_BE_REPLACED

By an incendiary moon, the night of November 11th. While others honor pointless deaths, while others are lounging peacefully in their sleep and false certainties, while most confine themselves to helplessness and fear, we light wicks. Some Molotovs inadvertently landed on the Tete d’Or police station. As the municipality
is armed and hosts the rest of the military, they must know that when they darken our lives, their walls will lose some of their luster.

Thoughts and courage to the six comrades from Lyon in their fight against the law.*

*Refers to the 6 antifascists arrested on November 13th for an action against local fascists Bastion Social. All of them have come under judicial supervision after being held in police custody.

NO TAV: Sabotage and solidarity actions in Savoy & Lyon (France)

From cette semaine, translated from informa-azione (click for photos):

We learn from the press of the regime that early in the morning on Saturday 3rd March acts of sabotage were carried out on the French railway trunk line. Three arsons hit the railway structures in the town of La Ravoire, Saint-Pierre-d’Albigny and Chamousset, near Chambery (Savoy).

These acts of sabotage, two of which on the high speed railway (TGV), caused delays throughout the day of Saturday for a hundred trains on the lines going from Chambery to Mondane (and to Italy), Bourg-Saint-Maurice and Grenoble. Therefore high speed trains to Italy were delayed besides those full of tourists going skiing (it’s school holiday in France).

Two signalling caves were set on fire, which are particularly important on this line because high speed trains use only one track on both directions. According to the press, unknown people tore off the cable trays in concrete running along the railroad tracks and set fire to the caves inside them (signalling cave) using rags soaked in petrol and oil. A graffiti saying NO TAV was left on a railway sentry box close to the arsons.

Police say they are not sure that the sabotage is linked to what’s going on in Val Susa (!) but a great numbers of gendarmes backed by helicopters equipped with thermal cameras were deployed to patrol the railroad tracks in the area…

On Thursday 1st March a solidarity demo with the NO TAV movement was held in Lyon. A group of unmasked people split from the march and forced a technician to open the door of a railway centre. The small group of demonstrators went up the railroad tracks and threw bags of sand at the air cables which feed the trains, thus blocking the latter. All trains that were due to pass by on that track were therefore delayed for one and a half hours (on one of the trains there were even two ministers visiting the area!) During the night paint was threw and graffiti were left on the walls of the Italian consulate of the city.