Tulungagung, Indonesia: Solidarity with the Makassar and Tangerang Anarchist Prisoners

As anarchists we believe, direct action and insurrection is the soul of anarchism itself, while prison and humiliation are the consequences of every direct action we take.

Our comrades in Tangerang and Makassar have decided to fight back against state oppression and must now be locked up in prison, and this is our duty to ensure they are not alone! We did a little decoration in an unused building a few days ago as our solidarity, let’s make and spread solidarity!

Our hugs and love for Makassar and Tangerang anarchist prisoners. Fire for prison! No anarchy without abolition of prisons and police! Solidarity with the Anarchist Prisoners in Makassar (Indonesia) 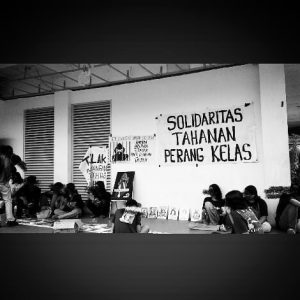 Surrendering to state domination is the death of living for humans, contempt in the face of this is freedom and independence.
Free choice to continue to survive and assemble all forms of power to keep burning and ready to burn all threats, to fight all forms of dictation of power, oppression and all forms of capitalism domination.
There is only one war, namely CLASS WAR !!!

Solidarity is a Weapon 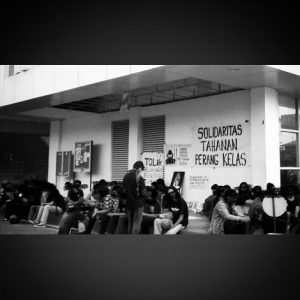 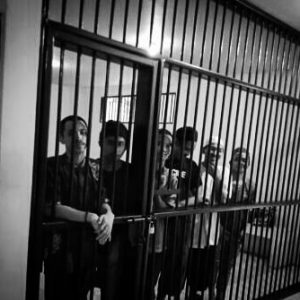 Pandang Raya: Update about the battle for the squatted district + Poster (Indonesia)

Updates: On the poster written about Pandang Raya inhabitants who are now living in the shelter, they need help. It can be read on the poster. The slogan said “Pandang Raya Haven’t Lost!” They need donation such as money, medicines, clothes, bed, etc. Contact person is written on the poster.

This is the link of previous battle years ago:
http://www.youtube.com/watch?v=Fv15BLM-lCU

This is the link of the recent battle:
http://www.frequency.com/video/tolak-digusur-warga-makassar-bentrok/192969033?cid=5-191

“And as the damned soul rises, so does the fire!”

Pandang Raya (Makassar) has been demolished to the ground. Friday 12 September, at 5 o’clock in the morning. Pandang Raya inhabitants and other rebels, build a barricade across the street with wood, tires, and rocks. At 6am, there’s appearance of pigs without uniform watching the blockade. Two of them watching the blockade close by. About an hour more, police vehicles filled with 600 pigs in uniform, including 365 the notorious Brimob (special police–my ass). Not long after that the battle began: Pandang Raya combatants throw molotovs, rocks, and other traditional weapon (such as arrows). The resistance were responded by huge blows of water canons and after that, large numbers of gangsters, who claimed that they got orders from Court of Law tried to entered the fights but were denied by the pigs because they don’t carry their ID’s. At 8.30 the pigs have successfully break the resistance. Other combatants have successfully fled from police arrest. But 9 person were arrested. Afterwards, several years of organizing side by side with anti-authoritarians, leftist, and other organisations; creating library and meeting place; in which Pandang Raya have already become their own ‘Cinema Paradiso’, have been destroyed to the ground entirely using big excavators and other heavy machines. The last stand and they were lost.

Ps: Rich people and their politicians, and also with their dogs or pigs in uniform, wanted Pandang Raya to be developed for their business purposes due to its strategic geographical location in the city.

In need of solidarity! Not money. Not banners.

But full frontal attacks of every political institution abroad and every fucking developer.

The last stand and another battle is lost?
After Karawang and then Pandang Raya, which is next? Wait and see? More formal meetings? More worthless gossips and dead-end ideological subdivisions. An act of war is not negotiation. And how useless the so-called movement when this sort of thing comes. 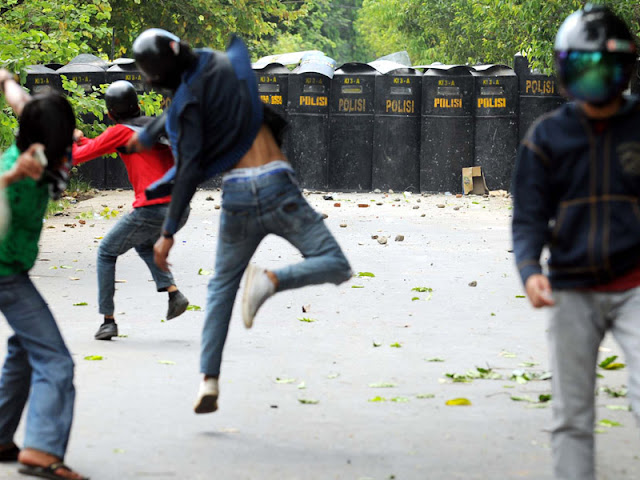 “Better to burn out than go out slowly.

Destruction of property is not violence. Violence is when you do it against an individual, and that’s not what we do. After all, those properties are produced by workers paid little.”

Hidayat, social combatant from Makassar, in prison after being caught over the action of solidarity to the insurgents occupying the Bima Sape harbor where eight people were shot dead by police.

News via Kokemi: Update – Comrade Hidayat is back inside the prison…

This news story is one of the horrors of life in prison, concerning being held in prisons that are contained therein inside the prison. Our comrade Hidayat being undertaken at this time, he was isolated in a room captured, called “Red cells”, the prison mini small-sized 2m x 1m, dark and dirty mental intimidation and terror of the state apparatus.

From the reports, comrade Hidayat was held captive for five days in jail also smaller than this size. Besides he reports he often gets intimidation and beatings, Comrade Hidayat also never received the package of food and beverages that he was sent. And our hearts are very painful, access to meet with him is limited. None was allowed to meet. According to information passed along, comrade Hidayat always is targeted by some extortion scenarios which are done by the prison apparatus and the prisoners who are also a finger in the hands of prison officials. END_OF_DOCUMENT_TOKEN_TO_BE_REPLACED

Comrade Hidayat has been moved to house arrest (Indonesia)

From kokemi. Rough automatic translation follows. Solidarity with the struggle for freedom in Indonesia. Liberty for Hidayat!

Hidayat in prison in Makassar after Bima demo – call for solidarity! (Indonesia)

Makassar Police Headquarters have finally charged our comrade Hidayat, who is accused of damaging Police outposts during a demonstration supporting the people of Bima. According to the police, Hidayat’s status has been changed to ‘accused’ because they have sufficiently strong evidence to justify this higher level. They also claim to have video and photo evidence.

Hidayat participated in a solidarity action that took place in Makassar on 26th December 2011 against the brutal police clearance of the anti-mining protest in Bima, where thousands of people had occupied Sape port. From what we have managed to find out, he was arrested secretively in the crowds between Jalan Gunung Bawakaraeng and Karebosi Link. END_OF_DOCUMENT_TOKEN_TO_BE_REPLACED

“A group of men threw Molotov cocktails at a Makassar Police post early Monday morning, one day after a local Pizza Hut restaurant was attacked.

The post was not occupied during the attack and no casualties were reported.”

“More than a dozen individuals in ‘motorcycle gang’ threw Molotov cocktails on Pizza Hut restaurant of Pettarani branch in city of Makassar. The action was conducted 04.30 in the morning. Door and windows were smashed and the Molotovs caused an enormous fire inside. The perpetrators also left an anti-capitalist message on the front of the door. Greetings of the coming insurrection.”

More than 50 youth with black hoodies attacked and destroyed PTPN central office in Makassar City, South Sulawesi. The action was conducted during the 100 days anniversary of SBY-Boediono’s corrupt government that was celebrated by large number of mass demonstration. Police with motorbikes come to chase the “black-hooded almamater” and no one got arrested. No communiques and statement was made by the group. PTPN (state-owned plantation companies) is a notorious institution since the Soeharto New-Order regime up to now. An institution who are responsible for taking over peasants land, destroying environment, and selling forest and land
for private business. For more comprehensive and one example of PTPN case written in english click to this link.