How to Take Down a Drone

via Down and Out.

PDF: How to Sabotage the Game Farming Industry

PDF: The Time is Now

This is a PDF explaining how to sabotage game farms. It needs to reach as many people as possible. Against all authority, speciesism and capitalism.

THE TIME IS NOW, BRING DOWN THE GAME FARM INDUSTRY

A step by step guide to sabotaging game farms and putting an end to this fucked up industry.

Game farming is abhorrent. Hunters will use the excuse of conservation as a justification for their murderous actions, but game farming cannot be sustained in any way. Breeding wild animals to be released with the sole purpose of killing them, modifying the countryside to suit the needs of the hunting community and killing all other wildlife in the process with the only aim of capitalising on animal exploitation. Game farming is, indeed, a multi million industry that can be toppled very easily using direct action.

As game farming is an incredibly lucrative business based on breeding and rearing wild animals, direct action focused on sabotaging the infrastructure and releasing the animals into the wild is the biggest and most impactful action anyone can do bring the business to their knees. I will repeat this to clarify: YOU CAN STOP THIS INDUSTRY BY WALKING IN THE COUNTRYSIDE.

This document will solely focus on how to liberate and sabotage game bird farms as a map has been made available with hundreds of entries throughout Europe where you can find your closest farms. That does not mean we do not encourage you to seek other farms, like deer, wild boar and even fox (yes, people are breeding foxes for hunting) and do exactly the same thing. You might need to modify some of the advice, but it will still be good for the most part. 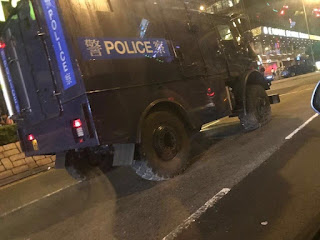 If you look closely almost every police intervention requires vehicles. And even the Power Rangers need wheels. The vehicles and not radio or riot gear, not even the policemen themselves, are the key to their capacity to intervene. A mobile unit without mobility is just useless.

It can not be understood why there are still areas that suffer the militarized police ravages that do not use this easy and so effective tactics.

First of all the wheels are not punctured, but cut to be precise. Cutting wheels in any of its variety and situations [Here Manual in Spanish] is by far the easiest, cheapest and most effective method to counter its immediate repressive action.

[Make one stabbing cut with a screwdriver or sturdy boxcutter into the softer sidewall of the tyre, not the tread]

Especially organized in coordinated parties of “Wheel Hunters” (see below).

I.e. a campaign of 20 vehicles per day for a week would collapse car cranes, workshops and some stocks. To increase the khaos, also cut the wheels of these same car cranes.

We agree that burning vehicles is in any case the most effective and definitive but has a number of drawbacks: alert all the rest of cops, reinforcements are called, they usually carry fire extinguishers in their vehicles, they will be likely to initiate an CSI [forensic] investigation and request CCTV records, which could initiate a repressive campaign, if you get caught in the action they will charge you with terrorism and attempted murder, and much more dangerous, you will face a shot instead of a blow. END_OF_DOCUMENT_TOKEN_TO_BE_REPLACED

PDF: How to Make Paint Bombs

PDF: How to Make Paint Bombs

How to Make Paint Bombs

Eggs filled with paint. Make a tiny hole either end of the egg, about the size of a syringe (no needle). Get the egg fluid/yolk out without leaving DNA traces on the egg. You can use the syringe or air pressure. After you have got the disgusting egg mess out by any safe means possible, let it dry and seal the bottom of the egg with strong tape (no DNA traces!). We like to use a parchment parcel tape because the paint bonds with the tape before drying, which helps destroy any forensics on the tape and the parchment doesn’t survive the action as well as the plastic-type tape. Fill the egg with paint via the syringe, being careful about all the paint traces, i.e. don’t get paint everywhere. Let it dry and cover the top hole with tape. We find it good to place all the eggs in an egg box.

Be careful about the egg box because sometimes they are marked with a QR/barcode that shows where the eggs/egg box is manufactured and also it’s point of sale. Be careful about where you got the paint, tape, eggs from etc. Police forensics can trace different types of paint, tape and eggs too. Keep a clean preparation space, clothes and no unexposed skin or hair. It’s a good preparation practice for further illegalist work.

With the eggs -paint-bombs- you can hit up targets quickly and almost silently (compared with smashing the windows), and gives you a good practice for
using stones and molotovs in actions. Learn how to throw if you can’t do it very well! The paint will splash back if you are too close to the target. Make sure the paint won’t come out during flight. The eggs can be transported inside the box and used in night actions, demos etc. Just don’t smash them on yourselves or in your bag accidentally and never throw anything from the back of a crowd, only from the front before disappearing into the mob!

It’s possible to make a lot of these and mass paint-bomb targets with high coverage in places under quite intense surveillance due to the speed of use and lack of noise. Using the paint-bombs newer comrades and those a ‘little out of shape’ can gain experience and learn from the techniques, checks and practices used in an active setting.

Good luck, and take care of each other!

How to avoid or destroy DNA traces

To avoid or at least minimize the risk of leaving DNA tracks it is necessary to use new gloves, mouthguard, Hairnet or even better closed headcovering (e.g. bathing cap) and washed clothes with long sleeves and trouser legs. However, usually all the other People leave traces as well, means that on more or less public places it won‘t be enough of the cops to simply sweep the mixed dirt – also frequently touched things lead sometimes to mixed traces which can‘t be evaluated. But to rely on this can be dangerous: In some cases they make extensive analyses, and if your DNA is found between many others, it‘s still there.

Often they find DNA on the fibers of clothes. Also places where people did piss can be interesting for the cops. Very famous are the thrown away cigarettes and saliva remains on stamps and envelops. Also famous, but less interesting is the hair, it‘s only valid for DNA analysis if the root of the hair remains. Not helpful to confuse the cops is the DNA of non-human beings. But a specific dog can be identified through DNA what could be a hint for the cops. END_OF_DOCUMENT_TOKEN_TO_BE_REPLACED

Anarchist and revolutionary must be ready for revolution to happen in every moment, especially now, when social and political protest all around the world are arising more and more often. Moreover, the possibility of global catastrophes and cataclysms is always present, and saving ourselves along with continuing our struggle in that case should always be in our agenda.

To write this article, we adopted the experience of people’s struggle in Ukrainian Maydan, successes and failures of recent anti-governmental protests in Belarus and Russia and analyzed the capacities and repressive tactics of police and intelligence in our country in last years. Though this tips were written first of all for comrades from above-mentioned countries, they may be useful for anarchists in any part of the world.

Note: for publishing this article, our site www.pramen.io was officially labeled as “extremist” by the Central district court, and blocked in Belarus (only accessible via Tor or VPN).

To avoid more repression from the police – think about your communication! The pigs get many informations through the unnecessary use of telephone and Facebook. Try Tails https://tails.boum.org/news/index.en.html , it is the most safe way of communication and internet using.

Tails is a live system that aims to preserve your privacy and anonymity. It helps you to use the Internet anonymously and circumvent censorship almost anywhere you go and on any computer but leaving no trace unless you ask it to explicitly.

It is a complete operating system designed to be used from a DVD, USB stick, or SD card independently of the computer’s original operating system. It is Free Software and based on Debian GNU/Linux. END_OF_DOCUMENT_TOKEN_TO_BE_REPLACED

This guide has recipes for two electrical timers, the Old-Fashioned Kitchen Timer and the SCR Digital Timer. Both recipes have been greatly expanded to give extremely clear and detailed instructions. Our goal has been to eliminate ambiguity from the directions and to provide as many helpful tips as possible. You don’t need prior experience with electronics. You need only practice some with a soldering iron. As long as you pay attention to details and do the proper testing, you’ll be able to construct highly reliable timers.

The Old-Fashioned Kitchen Timer is relatively quick and easy to construct. The SCR Digital Timer takes much longer to build, especially the first few times, but it is worth the effort. At the target, it can be positioned and activated with unparalleled speed and safety. In addition, the SCR Digital Timer is extremely precise – down to the minute, and even down to the second, depending on the timepiece. With that level of precision, you can guarantee that multiple incendiary devices will ignite at the same time. Simultaneous ignition is especially important in situations where you expect firefighters to arrive quickly. If ignition is not simultaneous, the first fire may bring firefighters onto the scene before the other fires have a chance to do damage.

There are two other timer recipes that have been passed around. Both have serious drawbacks and should no longer be used. One recipe uses the hour hand on a wind-up wristwatch to push two wires together. It is terribly imprecise and most wristwatches are unable to perform the job. The other recipe uses an alarm clock that plugs into an electrical outlet. (It must be an alarm clock with a battery backup.) This type of alarm clock shuts off its display when unplugged, creating complications for the saboteur. Another problem is its reliance on a REED relay, which is not a solid state component and not as resilient as an SCR. The SCR Digital Timer is more foolproof and easier to use.

We hope you find many good uses for these timers. Enjoy.