In the night from 19 to 20 October unknown people have thrown Molotov cocktail on territory of the prison. The same night two anarchists Nikita Yemelyanov and Ivan Komar were detained on the streets for this attack. In the rucksack of Nikita police found clothes containing traces of Molotov mixture and GoPro camera. Several days later both are charged with property damage and vandalism with sentenced going from 3 to 10 years.

During the first interrogation Ivan Komarov cooperates with police and gives all the information about the attack claiming that it was done in solidarity with another anarchist. The responsibility is put on the shoulders of Nikita. During the same time Nikita doesn’t admit any guilt for the attack.

Right now both are under arrest before the trial. Charges are mostly based on testimonies from Ivan Komar. Taking in account his cooperation Anarchist Black Cross Belarus have decided to support only Nikita Yemelyanov in this case.

We are calling for solidarity actions and donations to support the anarchist struggle in our country! Send your reports of solidarity actions to belarus_abc@riseup.net. To figure out the way to transfer money you can check our page on donation (we accept paypal, bitcoin, credit cards) – https://abc-belarus.org/?page_id=8661&lang=en. If you would like to do direct bank transaction – write us an email and we will give you the details.
Anarchist Black Cross Belarus

Athens: Claim of Responsibility for the Molotov attack against the Management of Police Operations – Base of Riot Cop Units MAT-YMAT (Greece)

In these days, the units of the repressive forces suppress once more the collective outburst of rage and the necessity for violent conflicts. In their offices, riot buses and coffeeshops they fed by the idea to catch insurgents in their grip to be able to humiliate, torture and imprison them. In these same days we attack them in their headquarters. To take them by surprise, to expose their weaknesses and failures in front of the ever-going will to destroy them. The same cops who are proudly patrolling in the city, convinced of their unlimited ability to terrorize the populations, were forced to run away loaded with fears in the night of December 2, in front of their own station.

As democratic state is maintaining the population in a constant state of survival without starvation and widespread sicknesses, in the same way the riotcops units are using the maximum of repression without direct execution. Their presence is to impose control, their actions to re-establish order. The war is chemical and the weapons they are allowed to use are not lethal. In every way they are the frame of stability, designing the inner borders of metropolis, tracing routes and dead ends for the demonstrations. They are occupying grounds, defining the danger zones which have to be surrounded. They are used against social uprisings, against the migrants inside the camps, to secure the destruction of natural places. They are the symbol of the dominant subject in the social base as the white straight European male, guarantor of the law in favor of statist and capitalist society.

The establishment of the YMET police station in Kaisariani was a planified move of the counterinsurgency policies. During the German-Greek Nazi occupation and the Dekemvriana 1944, this neighborhood was an area of resistance. Nowadays, it seems normalized in the neighborhood to have a constant presence of cops in uniforms circulating and living around this military base. This is a result when oppression is not to confront in itself but the enemy is to be found in the national origin of this oppression. Populations are accepting to be dominated by the local repressive forces if no foreign powers are involved. Some parts of the resisting forces, though the last decades have denied the left-patriotic characteristic of the guerrilla tradition. We are one part of this negation and we seek to develop our analysis beyond the leftist hegemony.

The insurrection of 2008 in Greece was one of the most powerful in the contemporary world. It showed an the amount of power and creativity which can be brought against the state mechanisms and how weak and small they looked those days. The murder of the anarchist Grigoropoulos from the Greek police will always be present in our memory and through our actions. Even though, we are to mark that this assassination, and the insurrection it brought within the society and the all left political spectrum was mainly because he was a 15 years old white Greek student (meanwhile they try to hide his political identity). From our sight, we are seeing the state‘s murders in various subjects, in a daily base along with the imprisonment and domination over the ground. That is why our struggles are violent and constant. Our insurrectionary acts do not depend on social legitimisation. Society is an abstract concept, more likely it refers to what is visible and approved to exist. Our struggles are connected to our experiences. We do not fight to save the people, we fight to survive and give solidarity to those who resist with the target to stimulate more individuals and collectives to join this sincere anarchist struggle.

Our tactics can easily be adopted in any metropolis of the InterState fortress. Every preparing action, every conversation, every aspect of our plan, can get us one step forward from our enemy giving us the advantage to surprise him. Let’s create an insurrectional movement without borders that will be able to spread anarchistic ideas and practices.

We send a burning signal and we join the call for a Black December announced by the comrades in Chile by communicating with this action and our words with the insurgents around the world. In fighting memory of all friends, comrades and unknown killed or imprisoned by the state.

By an incendiary moon, the night of November 11th. While others honor pointless deaths, while others are lounging peacefully in their sleep and false certainties, while most confine themselves to helplessness and fear, we light wicks. Some Molotovs inadvertently landed on the Tete d’Or police station. As the municipality
is armed and hosts the rest of the military, they must know that when they darken our lives, their walls will lose some of their luster.

Thoughts and courage to the six comrades from Lyon in their fight against the law.*

*Refers to the 6 antifascists arrested on November 13th for an action against local fascists Bastion Social. All of them have come under judicial supervision after being held in police custody.

In the evening of Friday December 16th, shortly before 20:00, we decided to pay a visit to the Piraeus Bank branch located at Canningos Sq. After smashing the ATM screen and the windows next to it with a hammer, we poured gasoline on the machine and torched it. Before leaving, we also threw a molotov to the ex-Ministry of Commerce located opposite the bank.

This action is dedicated to the memory of anarchist-nihilist Sebastian Oversluij, who was shot dead by a security guard while attempting to expropriate a BancoEstado branch in Santiago, Chile, on December 11th 2013.

This is also an act of complicity in solidarity with anarchist Tamara Sol Farías Vergara, who is held captive in the Chilean dungeons for taking revenge for the loss of Sebastián by opening fire against another private security guard of the same bank on January 21st 2014.

REMEMBER AND FIGHT FOR THE FALLEN AND IMPRISONED COMRADES!
INFORMAL COORDINATION AND ATTACK BY ALL MEANS!

“The State and Capital is the real terrorist. Solidarity with Kulon Progo Peasant Struggle!”

Two brave and uncontrollable brothers (David ‘Paddy’ Foster & Joe ‘Little Joe’ Foster) who were arrested at the squat Telepathic Heights after the disturbances in Stokes Croft, Bristol, have been in prison since the riots with two other young comrades (Ben, and another unknown one who was disappeared into the jail without so far any chance of finding them.). END_OF_DOCUMENT_TOKEN_TO_BE_REPLACED 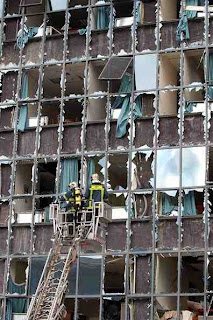