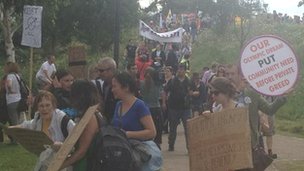 Last night we visited GDF’s office on the Anglo Office Park in Speedwell, broke around 20 windows around the unit (on both the ground floor and first floor) and left spray-painted tags next to the front door, ECOCIDE (with an arrow pointing to the company logo) and A.C.A.B. with an anarchist symbol.

GDF (while not a house-hold name over here yet) is a global energy and utility corporation with many arms, which among other things was a pioneer of nuclear power in Europe (including the UK, where they’re now in line for a new reactor in Sellafield), are involved with building police infrastructure here in the South-West, run 15 private-public prisons and surveillance camera systems in hundreds of cities and towns in France, provide communication systems for the defence industry, security for Total’s oil rigs in Nigeria…
END_OF_DOCUMENT_TOKEN_TO_BE_REPLACED Ever since they were founded in 1896, the modern Olympic Games have been more about money, power, and politics than they are about athletics and sport or celebrating some mythical ‘common humanity’. The financiers of this palaver and the economic system that underpins it have no ‘common humanity’ to share with us the excluded, despite the jingoistic London 2012 advertising forced down our throats for months and months now. END_OF_DOCUMENT_TOKEN_TO_BE_REPLACED