Reclaim the Cape -action week took place in Pyhäjoki 22.4.-1.5.2016 and dozens of people where detained by the police. 11 activists were arrested. Five of them were released in few days after the detention. After this, still six activists were kept in remand prison. One activist still remain in prison.

We have sent money, clean clothes, toothbrushes and toothpaste, cigarettes, books etc. to the prisoners as much as we’ve been able. However, the prisoners haven’t received all packages from their parents or other senders. They also haven’t been able to send or receive letters or postcards.

Pyhäjoki: both camps evicted, several arrested, one hospitalised due to police brutality (Finland)

Repression against those who oppose Fennovoima-Rosatom nuclear power plant project continues: and it’s getting worse and worse. On Friday 29.4. two protest camp sites got evicted at Pyhäjoki, Finland. Police operations were, on Finnish scale, massive.

Not big. Massive. Present were roughly 20 police vans, officers in riot gear, border patrol’s helicopter, sections from both national SWAT teams, dog units and specially equipped riot vans. Police declared the eviction of both camp sites by presenting a legally vague, written police order without even specified locations of the camp sites or other information. Just an order to leave and a declaration that police will arrest everyone “under the police law” it considers to “be connected to the locations” or “able to disrupt public order”.

The majority of the protest campers and Reclaim the Cape-action week participants grouped up and vanished into the forests without negotiating with the police.

As we speak, both sites are being emptied of infrastructure and belongings. Comrades are being searched and picked from the woods. Those been detained are being helped and awaited outside the cells. New campsite is under construction, but not public. END_OF_DOCUMENT_TOKEN_TO_BE_REPLACED

Today 28.4. around 3 pm, riot cops and a police patrol with dogs started to approach the camp. We communicated clearly to the police with a megaphone that they are not welcome, and we don’t want to engage in conflict with them. The police didn’t say anything or answer any questions.

The police started to shoot people with a projectile / rubber bullet gun and the people at the camp defended themselves by throwing rocks. The police were clearly aiming for the activists heads, backs of heads and upper bodies with the gun. People got hit several times on the area of their upper bodies. As far as we know, not to their heads though… The police got hit several times with the rocks, and there was one police car burning up in flames at the area.

After a long struggle with delay tactics, the police managed to move ahead to the camp when the people who were defending the camp disappeared to the forest. In the camp the police shot projectiles towards the kitchen-collective people. The police evacuated all the people from the camp, and took some people into custody.

The police have also threatened to evict another camp location which is still in our use.

We don’t accept giving into repression and police violence, and the struggle against Fennovoima will continue. Now we’ll need everyone to help build up the camp again, and to continue the fight and actions against Fennovoima. We invite comrades to this fight wherever you are – let’s aim our actions towards the companies which are working with/for Fennovoima, the embassies of Finland, or the local police. 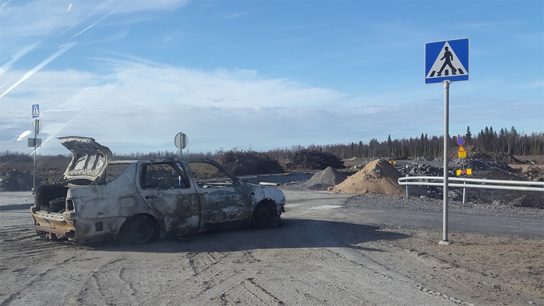 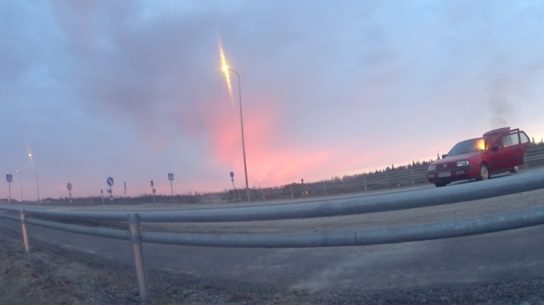 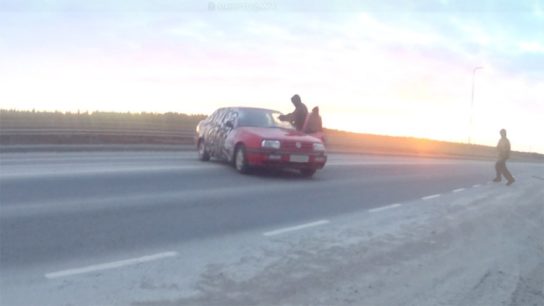 The Fennovoima Energy Company is starting to construct a nuclear power
plant in Pyhäjoki, a nice, quiet and small village in the northwest of
Finland.

During the second half of April, Fennovoima cut 95 hectares of very
special coastal forest at the construction area. They didn’t wait for a
month for the legal permission to clear cut the landscape. Instead,
Fennovoima started destroying the forest on Wednesday, the 15 of April.
The forest was a home for several rare birds and other species. Nests of
endangered white-backed woodpeckers (Dendrocopos leucotos) were
destroyed, a very rare white tale eagle got disturbed as dozens of
machines demolished it´s neighborhood.
END_OF_DOCUMENT_TOKEN_TO_BE_REPLACED

Energy company Fennovoima intends to start building a new nuclear power plant at the ecologically valuable Hanhikivi cape in Pyhäjoki, in Northern Ostrobothnia of Finland. Join us to stop the construction of this 100 000 year lasting problem, at its beginning!

Finnish energy policy is still stuck in the centralized production mode, and attempts to provide more nuclear power as a climate friendly solution, hiding the fact that nuclear power is an enemy of more sustainable and egalitarian forms of decentralized renewables. Decentralized and horizontal production of energy is just one part of the more equal society we are aiming for. The ecological crisis, and the social crisis in general, requires us to demolish the current model of economy and build alternatives where production provides for everyone’s needs.

A struggle against one irresponsible project is part of the global struggle for conditions of life itself. In recent years, socially and ecologically destructive projects have been stopped by the political power of the people joining forces to overturn political decisions. It is time to realize that also in Finland the acts of the people can be stronger than the words of politicians in making history. END_OF_DOCUMENT_TOKEN_TO_BE_REPLACED