Anarchist newsletter with info about the coming international meeting against the techno-prison world taking place in Italy, an article against the new social transformations of 4IR, report about 5G sabotage in UK and a quick point at two corporate targets in UK.

According to corporate media over the last fortnight a wave of arson attacks took place in the Netherlands against cellular phone repeaters. The last reported by the corporate media took place in Groningen. “Fuck 5G” was written at one site. The actions did not appear to be claimed. At least 15 attacks took place according to the info issued by the Dutch government through the media. Apparently the first fire was in Beesd on April 4. Since then transmission masts were also torched in Neerkant, Rotterdam, Nuenen, Dronten, Groningen, Oudenbosch, Veldhoven, Tilburg, and Almere. Reportedly, none of the antenna were 5G carriers, being 2G, 3G and 4G masts. Police reported that the method of sabotage was similar at each site. One instigator of the Groningen fire was caught on surveillance camera. Reportedly, European law enforcement officials are being pulled off terrorism cases in order to investigate arson attacks against 5G cellphone towers. The anti-5G arson attacks which initially took place in UK have sparked a blaze of attacks across Europe and beyond.

The Dutch security services started an anti-terrorist investigation covering the attacks. Further information and reports about the specifics of the actions are scarce. Dutch Prime Minister Mark Rutte was forced to make a statement about the anti-5G sabotage as the Dutch regime could not ignore it any longer. The sabotage seriously weakens the ability of the state to respond during a heightened moment of instability due to the coronavirus. Telecommunications industry companies are engaged in a public relations battle about the anti-5G actions and the implications for the expansion of 5G and the ‘Internet of Things’.

According to UK authorities and mobile companies another 20 attacks against 5G masts took place in UK over the Easter weekend. Arsons were reported in England, Wales and Scotland over the bank holiday – and follow others the previous weekend. Additional incidents were reported on Tuesday. So far 53 attacks have taken place from media news reports. Corporations continue with a joint media offensive to discredit the attacks, blaming them on the results of “misinformation” spread by “conspiracy theorists” and bot networks controlled by state actors such as Russia, Iran and others. Phone company EE issued a statement that it will be increasing security at high-risk sites. They said that guards who are patrolling those sites are being supplied with body cameras and are being instructed to alert local police. All of the communications industry companies had their infrastructure hit in the arson attacks.

You, your home, your family, your friends, your relationships and your activities will all belong to the 4IR. END_OF_DOCUMENT_TOKEN_TO_BE_REPLACED 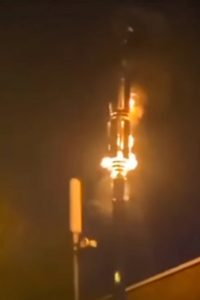 Since the first attacks last week, at least 20 attacks are reported to have taken place across the country and there are reports of engineers also being questioned, harassed and attacked by people worried about 5G. It is clear that whilst everywhere is in lockdown the continued expansion and roll-out of 5G has remained a priority. The UK State regime and communications corporations were forced to issue a statement describing the risks that 5G poses to human health to be “baseless” and blamed the harassment and attacks on “conspiracy theories”. Social media corporation Facebook took down several pages dedicated to recording and apparently inciting the anti-5G attacks and also had their messaging app company WhatsApp limit the forwarding ability of messages. This is part of a cross-platform corporate attempt with Twitter, Google, Youtube etc to co-ordinate efforts together with the State to censor and track what they are describing as “misinformation” about the origins of Covid-19. END_OF_DOCUMENT_TOKEN_TO_BE_REPLACED

We’ve been in a state of emergency for over a week now. The destructive capacity of the virus is no longer in question. But we would like to make some notes on its non-clinical consequences and on its origins.

Whether the COVID-19 virus came about because of a bat or an American attempt that has gotten out of hand, to disable the Chinese economy, we think is irrelevant now. This virus, like others before in history that massacred entire populations in the Amazon, Mesoamerica, Africa and Oceania, is a biological phenomenon. But the context in which it was born, how it spreads and how it is managed are social issues. This virus is the result of a system that commodifies every process, object, relationship or living being on earth. Spread rapidly across the macro-concentration of labour and the consumer corpus of cities, which feeds itself from agro-industry and intensive livestock farming. A flow of human assets (5 billion people fly around the planet each year) at frenetic speeds, reflected in 200 characters and 5000 likes.

It is precisely this effort to artificialize everything, even our emotions, everything being driven by profit, seeing the world through a screen, allowing our mind to be colonized by “efficiency”, which has led to a gradual loss of the “human”, of the “living”. Facilitating such extreme measures, in which there are only two reasons to get out of the house (work and consume) have entered in a way that is not exaggeratedly traumatic. At the same time, it is proposed to us as a way to escape the same technophile dynamics that have led us to disaster. If we add fear to it, the rule of fear, we end up losing our way and reinterpret concepts like responsibility or solidarity.
END_OF_DOCUMENT_TOKEN_TO_BE_REPLACED

The 70ft mobile phone tower in Birmingham was torched shortly after 8pm. Firefighters were called to the EE structure ‘well alight’ on Spring Road in Tyseley. Police also attended to block off the road while the flames were tackled for over an hour.

In Melling, Merseyside Fire and Rescue Service said it extinguished a 5G mast tower fire near the M57 motorway late in the evening on Friday.

Also, at the end of September 2019, the EE/BT tower in Porth, Wales, was destroyed by an arson attack

Against all harmfulness and toxicity

* Updated from Sans Attendre Demain: During the same night of April 3, in Belfast, in Northern Ireland, a 5G relay antenna was also burnt down: In a video published on the internet, we see flames at the feet of a pylon erected on Antrim Road, in a neighborhood north of the city. We also hear voices saying “fuck the 5G!” and “Long live the Revolution!”. A firefighter confirms that several fires were ignited at the base of the antenna, destroying cables and an electrical box in particular. 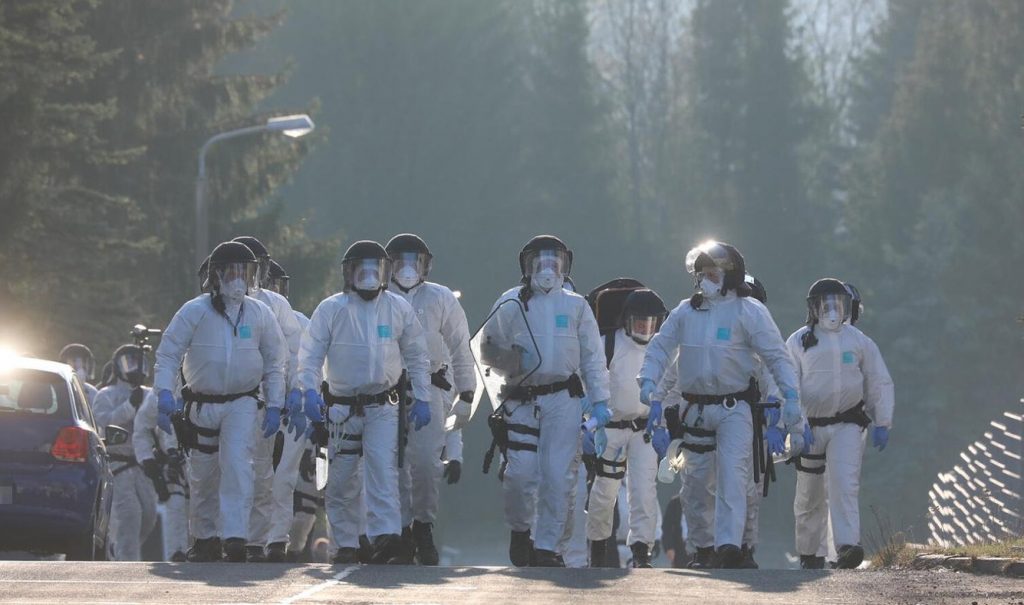