This year too, we are proposing an informal, convivial and international opportunity for discussion and reflection among individuals and organisations engaged in building an analysis and a critique of what we may call the technoworld. A world which is going through an epoch-making paradigm shift, where all bodies and our very experience have become one of the most important new raw materials. Engineering of the living and digital control are increasingly replacing a large part of the previous market of commodities, which are becoming obsolete. On a planet which has been plundered well beyond its biological limits, the re-designing through synthetic biology and artificial reproduction in a eugenic key of human beings and their management represents the new path forward. This of course for those who will be included in the new power arrangement, for the others no plans have emerged, or perhaps the fact that they have not been presented is already an answer in itself, they will certainly not be satisfied with merely marginalising a part of the world.

For those who ask where the current system, based on systematic exploitation of the planet, can find a way to reorganise itself, incorporating into its discourse the farce of sustainability, the answer lies in taking over human beings themselves: managed, influenced and addressed in their behaviour so that they themselves produce processes which can turn them into commodities. This is the true essence of green and sustainable policies to save the planet from so many catastrophes, of which climate catastrophe is only a part. Human beings who will soon be genetically edited in a process of ongoing perfectibility, where the body will be seen as a limit to be overcome, where what is human will be considered an error, and must therefore continuously adapt to a machine world. A techno-scientific adaptability which will become the only possibility. We can now seem how the cybernetic paradigm, according to which “the environment we live in has always been so radically modified that today we are forced to modify ourselves”, takes a material and dramatic shape. END_OF_DOCUMENT_TOKEN_TO_BE_REPLACED

PDF: Against Eugenics and Anthropocide – An Appeal to Abolish Any Artificial Reproduction

PDF: Against Eugenics and Anthropocide

“A crime against humanity is taking place before our eyes.
This crime, born in the brains of biologists and committed through the means of medicine and genetics, presents itself outwardly as a good deed and an emancipation for mankind.
A good deed for victims of sterility (organic or due to the chemical and industrial poisoning of the environment), for single women and couples of the same sex who are naturally infertile.
Emancipation from the living – spontaneous, autonomous and unpredictable – from the constraints of nature from which derives birth with all its uncertainties.
This crime is eugenics (at first called viriculture or aristogenics), the artificial selection of the human species, renamed this way in 1883 by Galton, a cousin of Darwin and also co-inventor of biometrics together with Karl Pearson (1857-1936). Or again race hygiene (Rassenhgyiene) in 1904, by Alfred Ploetz and Ernst Rüdin, two Nazi doctors. …” 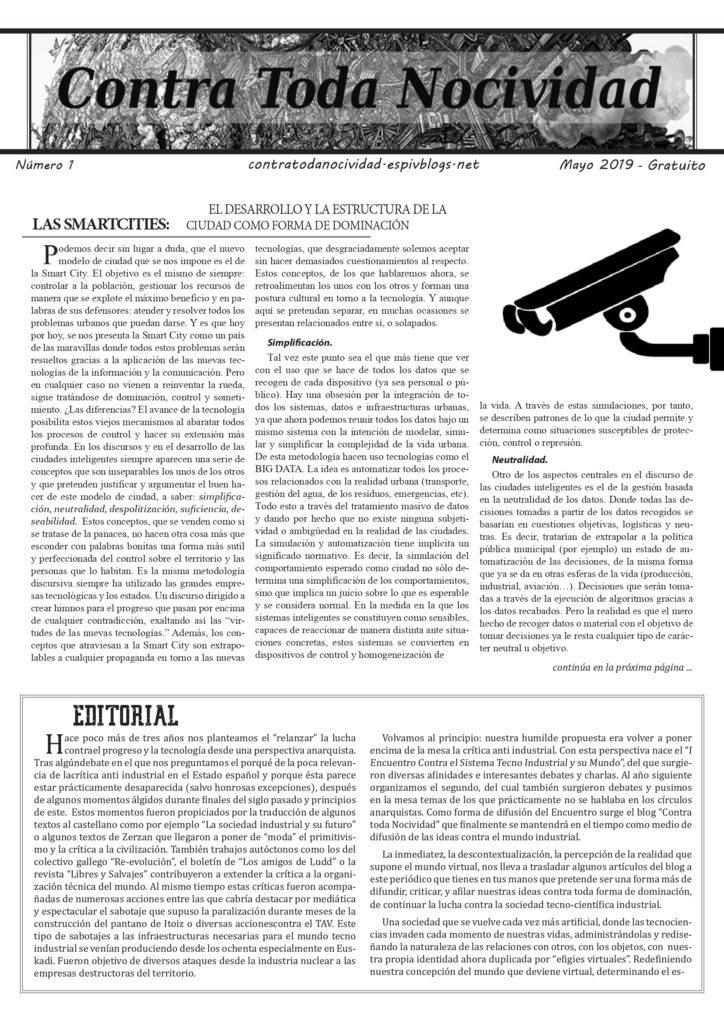 END_OF_DOCUMENT_TOKEN_TO_BE_REPLACED

But let’s take things in turn. For 21 months now, I have been pre-trial detained in the Greek prisons because I made the decision, like many fighters around the world, to realize my ideas by taking a battle position in the social war and fighting against power, here and now. So I am in prison because I put my ideas into practice beyond the limits of the law and certainly not by accident. END_OF_DOCUMENT_TOKEN_TO_BE_REPLACED

The program will come soon
Today more than ever, we feel the necessity to organize a meeting involving comrades from different countries already engaged in a critique and in opposition to developments of techno-sciences. An important moment to exchange and share analyses, reflections and experiences, to reinforce criticism and refine one’s thinking even more in confrontation with other groups and individualities that have been pursuing for a long time paths of opposition to the developments of techno-sciences.

In the face of the aridity and degeneration of contemporary thought and the lack of awareness of the pervasive, totalizing and above all irreversible nature of techno-sciences, a lucid analysis of the present is needed on the reality that transforms itself and transforms us. END_OF_DOCUMENT_TOKEN_TO_BE_REPLACED

“Not just any meeting” – Against the ‘SingularityU’ Summit (Italy)

Not just any meeting

Singularity is a metaphor taken from physics by Ray Kurzweil, founder of Singularity University, to describe the technological process that will come to merge the human with technology. Therefore, the University of Singularity aims to prepare leaders to apply exponential technologies to respond adequately to the anthropological, social, ecological changes that the technologized world requires.
This is an objective that it is carrying out well of course, given that world leading transhumanist executives and researchers come out of it, and that some of them then join the MIT (Massachusetts Institute of Technology), one of the most important research universities in the world; the DARPA, a government agency of the US Department of Defence for the development of new military technology; Google; Microsoft, to name but a few…

Surely the fact that it is in Silicon Valley, on a piece of land of the NASA, and being partly financed by Google, is a further confirmation of how much the idea of the world it is proposing is shared with those who create and cause the conditions of the ecological and social disaster we find ourselves in. To this disaster then one would like to find a “solution”, putting something into it.

But there’s nothing to worry about! The thing seems to have been found and is an artificial and robotized thing. In fact through the use of technology is thought to be able to deal with what in this conference they call “the great challenges of humanity”: we are assured of the possibility of a radiant future. A future in response to the fear of death and the desire for immortality, promises of cures for diseases, the absorption of pollutants from the environment, the defeat of poverty and famine.

This fabulous prospect must, however, be bartered and the complete acceptance of this technologized world is being asked in exchange. END_OF_DOCUMENT_TOKEN_TO_BE_REPLACED

‘Invasion of the Transhumanists’ from Acorn #22 (UK)

If there is one present-day current of thought that stands out as even more repugnant than all the other repugnance of industrial capitalism, it is transhumanism.

For those who have not come across it before, this is a warped ideology that wants to physically merge humans and industrial technology, with the “dream” of abolishing mortality and creating a super-race of cyborgs or Daleks.

Whether or not this is ever likely to come true is pretty much beyond the point – the transhumanists are dangerous simply in that they are promoting a way of thinking, a way of envisaging the future, that is completely bound up with the extension of industrial capitalism and, of course, completely against any idea of caring about the living planet.

The transhumanists form part of an ultramodern neoliberal cult – also worryingly infecting supposedly “radical” circles – which regards the very idea of “nature” as out of date and builds its cold worldview on a fetish for all that is false, artificial, inhuman. END_OF_DOCUMENT_TOKEN_TO_BE_REPLACED